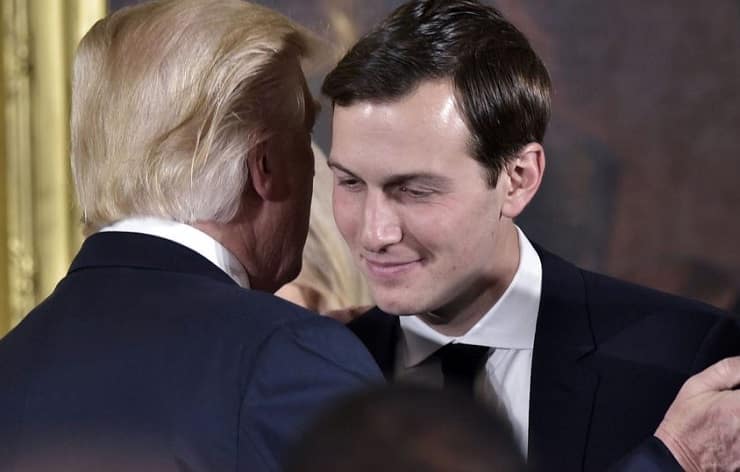 On the evening of March 10, 2020, US President Donald Trump made a speech a few would forget. His demeanor was bizarre, his speech halting, confused and his words often hesitant and contradictory.

Few knew that many that Trump and his daughter Ivanka had met with at their Mar-a-Lago retreat, including the president of Brazil, would come down with COVID 19. From the UK Independent:

“Mr. Trump announced he was shutting down “all travel from Europe’, except the UK, in a speech as notable for the underlying tones of nationalism in the president’s reference to a ‘foreign virus’ as it was for his apparent unease.

The 73-year-old sniffed heavily, suppressed several coughs and appeared to be struggling with the teleprompter throughout his short but labored speech, which immediately saw members of his administration scramble to correct his errors.

First, the president risked sending markets tumbling even further when he announced, seemingly by accident, that ‘these prohibitions will not only apply to the tremendous amount of trade and cargo but various other things as we get approval’.”

When the stock markets crashed the next morning, it wasn’t over economic issues but rather a total lack of trust and confidence in Donald Trump the person. You see, two of the nations, Ireland and Great Britain, that were left off the travel ban have very high rates of infection and everyone knows it.

They also have Trump-owned golf courses. This story spread like wildfire, one of the dozens of such stories, more each day, a total lack of confidence by not only America’s financial sector but the American people as well, in Trump and his family cabal that has been sorely tested and has failed so miserably.

His callous remarks, poor spelling, lack of knowledge and an endless stream of childish lies, making him the hero of both barroom and bowling alley, has, predictably, done more damage to the US than over 200 years of wars.

The real “killer” was Trump’s closure of the Office of Global Health Security and Biodefense, part of the National Security Council. Trump has lied about this fact over and over. From Beth Cameron, former Senior Director of that now-defunct agency, published in the Washington Post, March 13, 2020:

“When President Trump took office in 2017, the White House’s National Security Council Directorate for Global Health Security and Biodefense survived the transition intact. Its mission was the same as when I was asked to lead the office, established after the Ebola epidemic of 2014: to do everything possible within the vast powers and resources of the U.S. government to prepare for the next disease outbreak and prevent it from becoming an epidemic or pandemic.

One year later, I was mystified when the White House dissolved the office, leaving the country less prepared for pandemics like COVID-19.

The U.S. government’s slow and inadequate response to the new coronavirus underscores the need for organized, accountable leadership to prepare for and respond to pandemic threats.

It’s impossible to assess the full impact of the 2018 decision to disband the White House office responsible for this work. Biological experts do remain in the White House and in our government. But it is clear that eliminating the office has contributed to the federal government’s sluggish domestic response. What’s especially concerning about the absence of this office today is that it was originally set up because a previous epidemic made the need for it quite clear.

In 2016, after the formidable U.S.-led Ebola response, the Obama White House established the global health security office at the National Security Council and asked me to lead the team. We were to prepare for and, if possible, prevent the next outbreak from becoming an epidemic or pandemic.

Our team reported to a senior-level response coordinator on the National Security staff who could rally the government at the highest levels, as well as to the national security adviser and the homeland security adviser. This high-level domestic and global reporting structure wasn’t an accident. It was a recognition that epidemics know no borders and that a serious, fast response is crucial. Our job was to be the smoke alarm — keeping watch to get ahead of emergencies, sounding a warning at the earliest sign of fire — all with the goal of avoiding a six-alarm blaze.”

Trump closed the pandemic response capability for one reason, it was set up by President Obama. Trump claimed, however, that he saved $150,000,000 in doing so.

Thus far, the cost of Trump’s blunder has been $35,000,000,000,000. The ratio expressing negative ROI (return on investment) can only be expressed in scientific notation, to the sixth power. This is a guy who went bankrupt six times, who has now lost more money than, corrected to today’s currency, it would cost to fight World War II eight times.

When we heard that Donald Trump, who refuses to be tested after serial exposure to COVID 19, has asked his son in law to take over the effort against the current pandemic, we were flabbergasted.

Jared Kushner, a New Jersey slumlord and embarrassment, barely got into college, requiring a massive bribe from his family’s mob-backed enterprises. Now he is responsible for America, and to an extent, the world’s survival.

Kushner immediately called a doctor he knows who works in an emergency room, someone with no experience in epidemiology but at least a medical license of some kind. That doctor turned to Facebook and posted: “The person who is advising the president asked me to come up with ideas, can anyone tell me what to do?”

The last time Trump turned to Facebook, he launched missiles at Syria over a fake gas attack.

China, it seems, has beaten the disease and is now aiding Italy in its efforts. They did so with leadership and will.

In the US, the head of the CDC (Center for Disease Control), Dr. Robert Redfield, who has a heavily edited Wikipedia page hiding his history of religion-based treatment for AIDS which may have led to the deaths of many thousands, is partially responsible for the total failure to address the current threat.

He replaced Brenda Fitzgerald, another Trump appointee, who resigned in 2018 when her ties to drug and tobacco companies were exposed.

Then it gets worse, with the initial appointment by Trump of Vice President Mike Pence to head the US initiative in response to COVID 19.

Pence, who as governor of Indiana, advocated prayer to cure “gayness,” also, as governor advocated the same as a cure for HIV, opposing all programs, enacted at the advice of medical professionals, that other states implemented. Thus, Indiana ended up a “hot zone” of HIV under his leadership.

But then we haven’t heard anything from Pence though 28-year-old Katie Waldman, now married to Trump’s advisor and primary contact to neo-Nazi political groups, Stephen Miller, has made a few nasty comments to reporters who mistakenly have asked pointed questions that Pence is unable to answer.

Pence, in fact, hasn’t been seen since a Sunday, March 8, 2020 television interview during which he was unable to answer rudimentary questions on COVID 19 testing.

Now we have something much more insidious than simply an incompetent government. China now accuses the US of bringing the virus to China. As reported in VT by this author:

“In October 2019, the US brought 172 (really 369) military athletes to Wuhan for the World Military Games.  Despite having the largest military in the world, tenfold, the US came in 35th behind nations like Iran, Finland and Slovenia. No video or photos exist of the US team, no records were kept, a huge team but a pitiful performance for the best military in the world.

The US team did so badly that they were called “Soy Sauce Soldiers” by the Chinese.  In fact, many never participated in any event and were housed near the Huanan Seafood Wholesale Market, where the disease is said to have originated only days after the US left the area.

The US team went home on October 28, 2019, and within 2 weeks, the first human contact cases of COVID 19 were seen in Wuhan.  The Chinese have not been able to find “patient zero” and believe he or she was a member of the US team.

They also have sources that say the US had misrepresented influenza that Trump claims have killed thousands, influenza carried to China by the US team, influenza that was really COVID 19, a disease developed in a military bio-warfare facility in the state of Washington, now “ground zero” in the US for COVID 19.

Evidence of this aspect of China’s claim is scant.

The Chinese claim, something censored in the US, that the inattentive attitude and disproportionately below average results of American athletes in the game indicates they might have been in for other purposes and they might actually be bio-warfare operatives, and that their place of residence during their stay in Wuhan was also close to the Huanan Seafood Wholesale Market, where the first known cluster of cases occurred.”

Past this is another observation, also potentially coincidental, that the major outbreaks in China, Iran, and Italy, the primary hubs in the Silk Road that threatens traditional Western controlled world trade, are proof of COVID 19 as a bio-warfare agent.

Under other circumstances and in other times, such conspiratorial claims could be easily denied, but no longer. From New Eastern Outlook:

We can make some blanket statements about COVID 19 and will do so now:

Simply put, there are actors out there that can and would unleash a global pandemic as a component in the long term “chaos theory” operation.”

It is clear that Donald Trump in the US and Boris Johnson in the UK represent a “perfect storm” of bumbling incompetence and paralytic policymaking in the face of the current global pandemic threat.

It is also clear that both Trump and Johnson are Deep State puppets, an assertion supportable through an examination of their personal history, their paths to power and their unique attributes for theatricality and prevarication.

The questions that remain relate to solutions. Can there be solutions in the US, Britain as well, when government incompetence and inaction arrives served as a toxic soup of leadership malaise and conspiratorial complicity?