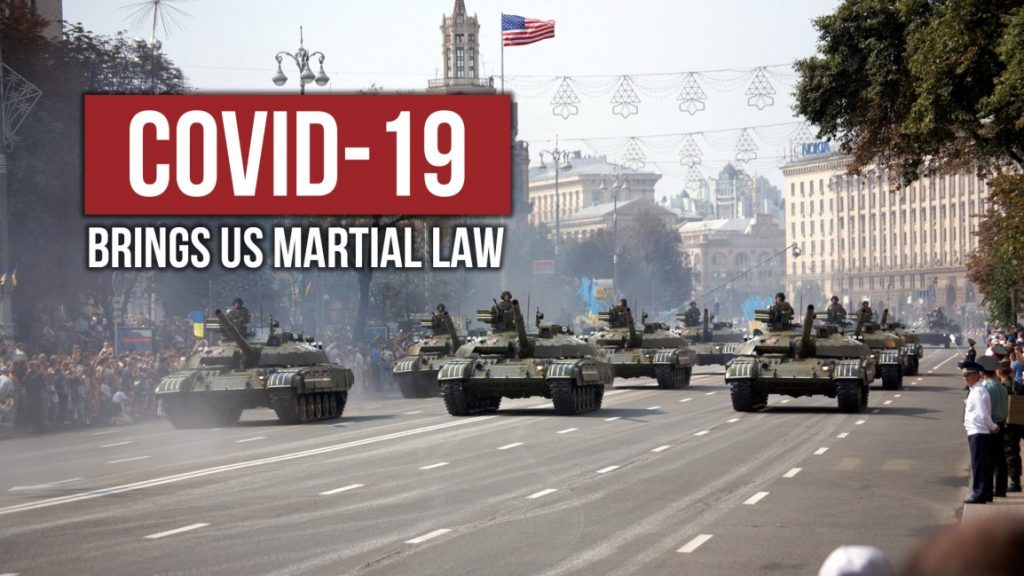 Under the Militia Law, Gov. Hogan can call on the National Guard in troubling times — and as the coronavirus spreads — he has made that call.

Responding to emergencies, transporting people and supplies and helping with medical care are just some of the functions of the Maryland National Guard.

“There’s no end to this mission at this point in time,” Adjutant General of the Maryland National Guard Major General Timothy Gowen said. CBS Baltimore 3/18/2020

“On September 15, 1863, Lincoln imposed Congressionally-authorized martial law. The authorizing act allowed the President to suspend habeas corpus throughout the entire United States. Lincoln imposed the suspension on “prisoners of war, spies, or aiders and abettors of the enemy,” as well as on other classes of people, such as draft dodgers. The President’s proclamation was challenged in ex parte Milligan (71 US 2 [1866]). The Supreme Court ruled that Lincoln’s imposition of martial law (by way of suspension of habeas corpus) was unconstitutional.” Source

On April 14, 2020 President Trump announces Congressionally authorized martial law. “We must protect the people and use every means at our disposal to combat the coronavirus. To maintain continuity of government and ‘national security’ we must temporarily suspend some of the rights of the people in order speed up the process and guarantee that all people get the help they need. Therefore during this period we will not allow demonstrations or appeals to due process to interfere with this clear and present danger. It is a national emergency. Healthcare workers in cooperation with the National Guard and military and police units will be going door to door administering vaccines for prevention of the spread of the CV. Those refusing the shots will be transferred to quarantine centers in their regions for observation and isolation until the public at large is vaccinated.”

Would this be lawful? Maybe. In the 1866 decision, the Supreme Court said:
“If, in foreign invasion or civil war, the courts are actually closed, and it is impossible to administer criminal justice according to law, then, on the theatre of active military operations, where war really prevails, there is a necessity to furnish a substitute for the civil authority, thus overthrown, to preserve the safety of the army and society; and as no power is left but the military, it is allowed to govern by martial rule until the laws can have their free course. As necessity creates the rule, so it limits its duration; for, if this government is continued after the courts are reinstated, it is a gross usurpation of power. Martial rule can never exist where the courts are open, and in the proper and unobstructed exercise of their jurisdiction. It is also confined to the locality of actual war.” [IBID]
Are the court systems closed? Almost.

Is the coronavirus a foreign invader? Well, if you wanted to impose martial law, how would you describe it?

This is the most aggressive and comprehensive effort to confront a foreign virus in modern history. I am confident that by counting and continuing to take these tough measures, we will significantly reduce the threat to our citizens, and we will ultimately and expeditiously defeat this virus. President Trump[source]

The powers not delegated to the United States by the Constitution, nor prohibited by it to the States, are reserved to the States respectively, or to the people. 10th Amendment

“[T]he several states who formed that instrument [the Constitution], being sovereign and independent, have the unquestionable right to judge of its infraction; and that a nullification, by those [states], of all unauthorized acts….is the rightful remedy.” Thomas Jefferson, Kentucky Virginia Resolution

That if those who administer the general government be permitted to transgress the limits fixed by that compact, by a total disregard to the special delegations of power therein contained, annihilation of the state governments, and the erection upon their ruins, of a general consolidated government, will be the inevitable consequence: That the principle and construction contended for by sundry of the state legislatures, that the general government is the exclusive judge of the extent of the powers delegated to it, stop nothing short of despotism; since the discretion of those who administer the government, and not the constitution, would be the measure of their powers: That the several states who formed that instrument, being sovereign and independent, have the unquestionable right to judge of its infraction; and that a nullification, by those sovereignties, of all unauthorized acts done under colour of that instrument, is the rightful remedy.

Supreme court rulings on states’ right to nullify laws repugnant to the Constitution:

Accordingly, the Federal Government may act only where the Constitution authorizes it to do so. Cf. New York v. United States,505 U.S. 144 (1992).
The Constitution, in addition to delegating certain enumerated powers to Congress, places whole areas outside the reach of Congress’ regulatory authority. The First Amendment, for example, is fittingly celebrated for preventing Congress from “prohibiting the free exercise” of religion or “abridging the freedom of speech.” The Second Amendment similarly appears to contain an express limitation on the government’s authority. Printz v. Mack 95-1478 and 95-1503

All political power comes from the barrel of a gun. Mao Zedong

Is Forced Vaccination the End Game?

“Today Americans would be outraged if U.N. troops entered Los Angeles to restore order; tomorrow they will be grateful. This is especially true if they were told there was an outside threat from beyond, whether real or promulgated, that threatened our very existence. It is then that all peoples of the world will plead with world leaders to deliver them from this evil. The one thing every man fears is the unknown. When presented with this scenario, individual rights will be willingly relinquished for the guarantee of their well being granted to them by their world government.” Henry Kissinger

Imagine how bad this can get. People forced to close their businesses, the US Economy in death spiral (deliberately) and banks closing while foreign supplies (inputs) are halted. States forcibly closing businesses, and even closing their borders, will have dire consequences for food availability. Supermarket hours are now being limited, and large numbers of people in the inner cities typically have less than 3 days of food on hand. California just told all 40 million people to stay home – this is not going to play well, so how will those who refuse to self quarantine and close shop be handled?

I am not a “fearmonger” or someone trying to inculcate fear – that is the job of the alternative media controlled opposition. Fear paralyzes the mind, temporarily lowers IQ and causes the people to look to “authorities” for solutions. I am a reader, thinker, peaceful, and loved the America in which I grew up; I want that America again.  I have read the plans that have existed for decades that describe this end or one just like it. Here are just a few of the hundreds of quotes worth contemplating:

“We are on the verge of a global transformation. All we need is the right major crisis and the nation will accept the New World Order.”
— David Rockefeller speaking at a UN Business Conference, Sept. 14, 1994

“We shall have world government whether or not we like it. The only question is whether world government will be achieved by conquest or consent.“
— James (((Paul Warburg))) – In an address to the U.S. Senate, July 17th, 1950

“The next 15 years may well be the age of super-terrorism, when they [the Islamic terrorist] gain access to weapons of mass destruction and show a new willingness to use them . . . . Terrorists in the early years of the twenty-first century will reflect the causes that excite passion and move people to violence . . . conflict will increase until a new stasis or ‘world order’ is established.“
— “The Futurist” magazine, November,December 1994 issue, in an article titled “The Future Face of Terrorism”

“The drive of the Rockefellers and their allies is to create a one-world government combining supercapitalism and Communism under the same tent, all under their control…. Do I mean conspiracy? Yes I do. I am convinced there is such a plot, international in scope, generations old in planning, and incredibly evil in intent.“
— Congressman Larry P. McDonald, 1976, killed in the Korean Airlines 747 that was shot down by the Soviets

“In the next century, nations, as we know it, will be obsolete. All states will recognize a single global authority.“
— Strobe Talbott – Deputy Secretary of State under Bill Clinton. Time Magazine, July 20th, 1992

“The world today has 6.8 billion people… that’s headed up to about 9 billion. Now if we do a really great job on new vaccines, health care, reproductive health services, we could lower that by perhaps 10 or 15 percent.” – Bill Gates

Vaccines are not about the problems limiting good health, they are about creating health problems.

Vaccines have been known to be health damaging since their first use by Louis Pasteur. The reader can find endless amounts of information on the detrimental effects of vaccination. However, vaccination might still be by choice, if the medical establishment never finds the morality to eliminate them, but the medical mafia, including the allopathic medical industry, funded by the pharmaceutical industry, has worked to eliminate choice and push for mandatory vaccinations – an attack (war) on the human body.  It is almost certain that during a time of medical martial law forced vaccinations will attempted.

Vaccines might be offered at the end of the protracted period of self quarantine and the discomfort and violence that yet may arise, especially if people are forced to forgo their previous ways of living, while access to food, medicine and even entertainment dwindles, increasing trauma and anxiety. Then, as Kissinger has said, “The one thing every man fears is the unknown. When presented with this scenario, individual rights will be willingly relinquished for the guarantee of their well being granted to them by their world government.”

An Immediate Solution to Forced Vaccination

Most importantly, states must take the initiative and introduce laws mandating freedom of choice into every state assembly in the United States. The following introduced in South Dakota.

“Section 5. That a NEW SECTION be added:

This law can end or seriously limit the ability of the Pharmaceutical Mafia, in concert with a corrupt medical system, to forcibly administer vaccination to the population, while impacting profitability and the sweeping control this industry and its captured

May all of you be safe and make it through this act of terrorism* created by the same people who will promise to take care of you and make everything safe again.

THE EMPIRE’S NEW VIRUS, FINANCIAL COLLAPSE AND THE GHOST OF VACCINES PAST | JACK MULLEN

Bailout Everyone? The Fed is Doomed To Fail – Ron Paul