[ Editor’s note: Despite the feature image I used, the Corps is not down for the count. It looks like the US cavalry is saddled up and ready to go after making the required government stops to get clearance on this project, starting with New York City as the test location.

My concern is that even with a 24 hour day put into refurbishing buildings to create 10,000 ICU units, where is the needed equipment going to come from? States who have enough equipment are going to want to keep what they have.

The schedule on this to be ready by the predicted virus peak of mid-April seems like a wish for getting the specialized equipment that needs lots of parts to complete when just a couple of tardy suppliers can have you ending up with a lot of partially completed machines, like ventilators.

But that said, despite the mid April peak estimate, we don’t know how long it will last, plus there will be staggered infection peaks among all the states.

The silver lining in all of this is that we are seeing the kind of pandemic response planning that was necessary to be ready before Trump killed the program, part of the NeoCon revenge of wanting to tear town anything Obama had done.

With what we can see using 20/20 hindsight, national reserves of key equipment should have already been in storage, emergency facility locations already scouted and in a database, plus manufacturers of critical equipment holding parts inventories to produce more already paid for by the government.

We will have plenty of time to cover this in detail before election day… Jim W. Dean ] 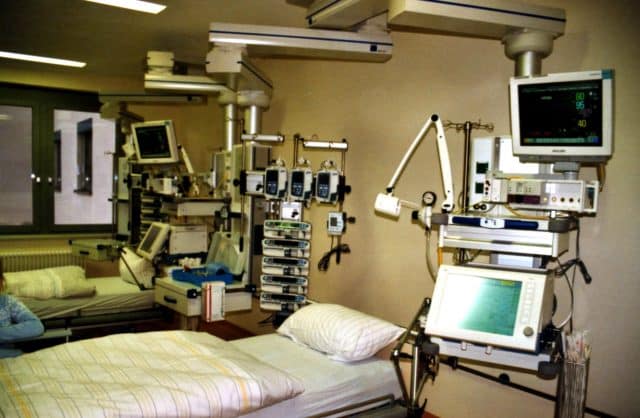 WASHINGTON — The Army Corps of Engineers is planning to create more than 10,000 ICU-type hospital rooms in hotels, dormitories and other available buildings in New York City over the next few weeks, its commander said Friday.

The corps is racing against the spread of the coronavirus to turn empty buildings in cities across the United States into high-quality COVID-19 treatment centers before the virus reaches its peak in each metropolis,  told reporters. To achieve this, he said the corps had come up with “a standard design” to rapidly convert hotels and similar structures into medical facilities.

“We want to use New York as the standard setter,” Semonite said.

Displaying a pamphlet that he said contained the design, Semonite said the concept has already been presented to White House officials and approved by the Department of Health and Human Services and the Federal Emergency Management Agency.

“This is an unbelievably complicated problem, and there’s no way we’re going to be able to do this with a complicated solution,” Semonite said. “We need something super simple.”

He described a four-phase process: First, a state governor would have to nominate the facilities in a prioritized order and set up any required leases. Next, the Corps of Engineers would step in, hire contractors “in an exceptionally short amount of days” and turn it into “an ICU-like facility,” he said.

Key to the modifications would be ensuring that each patient room has negative pressure, so that the virus cannot escape the room. Semonite said most rooms already have a device that allows them to do that, but if the room lacks such a device or the device isn’t working, one can be installed.

Third, the room has to be equipped with the appropriate medical supplies. FEMA and HHS have drawn up a list that would be standard for all rooms, according to Semonite. Nurse stations equipped with wireless technology would be located in the corridors, he said.

Finally, the facility would have to be staffed with medical professionals, a goal that Semonite said was for each state to accomplish.

He said that the concept could be applied to a convention center, but that such buildings weren’t ideal because they didn’t allow for quite the same level of care as hotels and dormitories.

Semonite said he had met earlier in the week with New York Gov. Andrew Cuomo, who was keen to get the process started. “We actually got turned on by the governor and got money from FEMA to go into buildings on Tuesday night,” Semonite said.

He said Corps of Engineers personnel had investigated the Javits Convention Center in Manhattan and some State University of New York school buildings on Thursday. “Today my engineers were walking through 10 other buildings” in New York, he said, adding that half of those were “hotel-like” facilities and others were “open spaces.”

Speed is of the essence, Semonite stressed. “We’ve got to do something very, very quick,” he said. “This has to be weeks, it can’t be months. … We need everybody going full bore.”

Most state governors he had heard from estimated that their COVID-19 cases would peak in the middle of April, Semonite said. For that reason, the Corps and its contractors do not have the luxury of taking “all the time in the world to do it,” he said. Rather, they must focus “the most important things we have to do and come up with a good enough solution.”

The Corps is working with HHS to calculate which “key cities” will see their curves “go exponential,” he said. “We can’t do everywhere, so we’re really asking the federal government to help prioritize our efforts.”

Choosing which cities the Corps goes to first is, according to Semonite, a function of two variables: when the curve of expected new COVID-19 cases is expected to climb most steeply in that city, and how many hospital beds the city already has. But for the changes to happen on time, it is imperative that both the hotel industry and the engineering contractors “step up,” he said.

Those states that don’t want to wait can take the Corps’ design and apply it themselves, Semonite said. “You don’t have to wait on the Corps of Engineers.”

But if time is tight, funding is not. “Right now, money is not a problem at all,” he said.