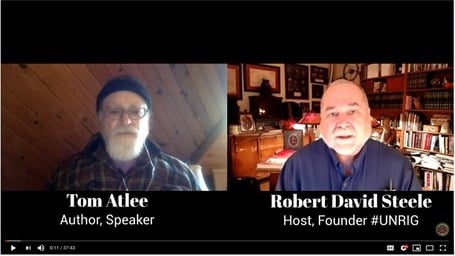 Tom Atlee, founder of the Co-Intelligence Institute, is the author of the epic book The Tao of Democracy: Using Co-Intelligence to Create a Work That Works For All. He was a major contributor to Robert Steele’s book edited by Mark Tovey, COLLECTIVE INTELLIGENCE: Creating a Prosperous World at Peace, and went on to write Reflections on Evolutionary Activism and then Empowering Public Wisdom. Along with Alvin Toffler, who became a friend in 1993 when he wrote the chapter on “The Future of the Spy” around Robert and his vision of a global open source human intelligence network, Tom is the single most important teacher to Robert on all that needs to be known about creating smart communities in which every citizen is an informed engaged participant in wise sustainable self-governance.

Learn more about and from Tom: