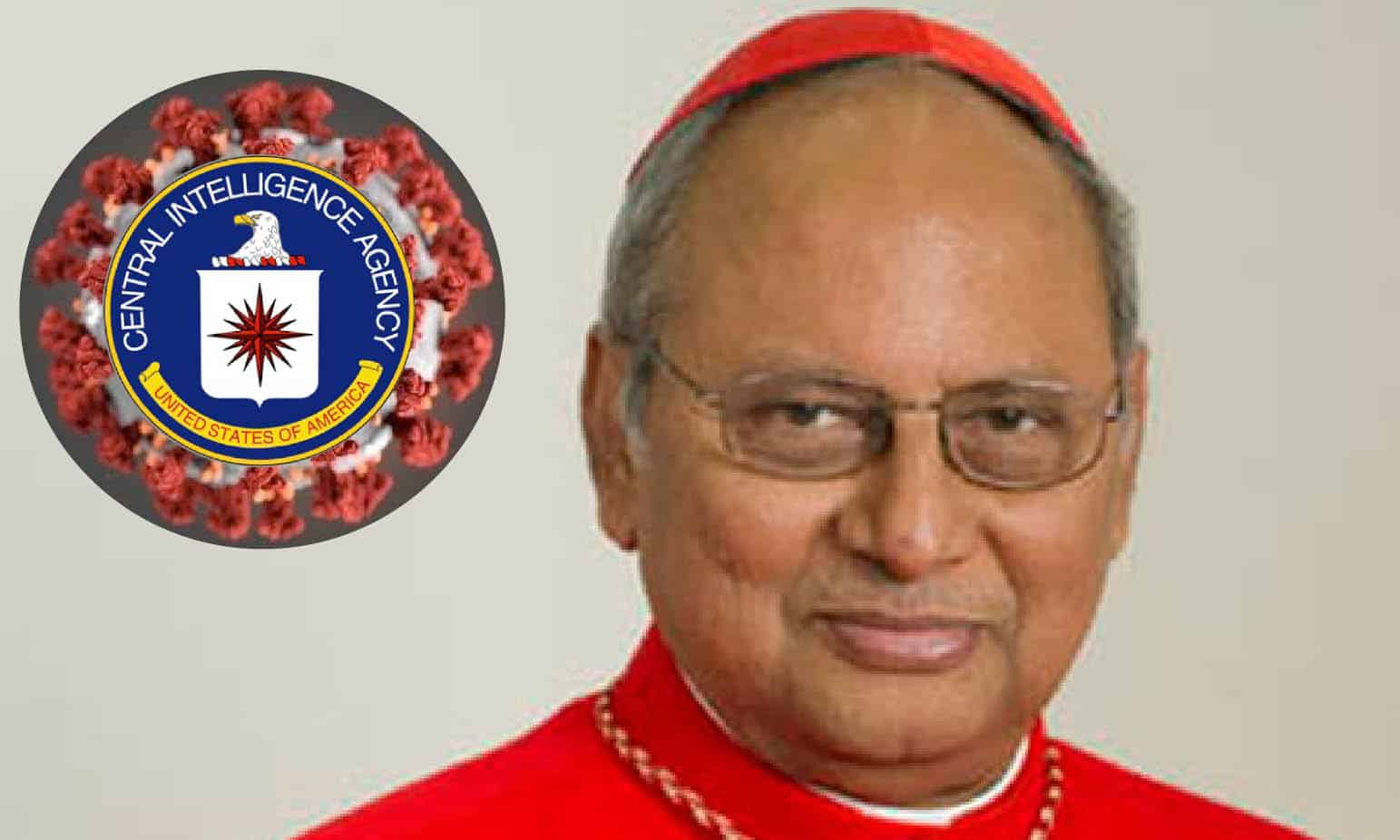 «These types of researches are not carried out for people in poor countries but in laboratories in rich countries. Producing these things is a very serious crime against humanity. I ask the Lord to come to reveal who sowed this poison. I think the United Nations must take action to understand how this whole incident arose and to punish those responsible. These researches should be prohibited».

To confirm the theory that CoronaVirus is a bacteriological weapon as claimed by Gospa News since February 4, is a Sri Lankan cardinal, the archbishop of Colombo, Malcom Ranjith.

After the former Iranian president, it is now an exponent of the Roman Catholic Church to request the intervention of the United Nations to start an investigation into the pandemic. The words of the high Christian prelate confirm the multiple suspicions highlighted in our reports with hundreds of detailed clues.

The letter sent to the UN Secretary General, Antonio Guterres, by Mahmoud Ahmadinejad, formerly in charge of the Islamic Republic of Iran, had been ignored by almost all the media: in the West because it was written by a Shiite Muslim, in the Middle East because in Tehran the former Conservative leader in 2018 had even ended up under house arrest as he was suspected guilty of having fomented protests against the government by his successor Hassan Rohuani.

Ahmadinejad’s disturbing detailed letter was therefore published by Veteran Today in the latest report in support of the thesis on biological warfare along with the suspecions they bring to the US but especially to Langley, Virginia, the headquarters of the Central Intelligence Agency…

Now, however, many Italian and Western newspapers, until yesterday shy, opposed or sarcastic in the face of the hypothesis of a planned pandemic, which in the world has already infected more than 230 thousand people killing around 10 thousand, they raise the cry of accusation by the Sri Lankan cardinal.

The newly identified virus, which causes a respiratory illness known as COVID-19, has killed at least 161 people in the United States, according to ABC News’ count. The number of infections reached than 11.329 people across all 50 states. This latest update makes the US the eighth country for cases globally but the numbers are growing rapidly…

Health officials in Italy have confirmed a further 427 deaths from Covid-19, pushing the country’s overall death toll to 3,405. The figure overtakes the number of total deaths in China, 3,245 from the outbreak.

To tear the fearful silence of the media, this time not only of the mainstream but also many of counter-information, is not just any religious.

It is the Christian prelate who a little less than a year ago found himself mourning the 258 victims, including 45 children, of the explosive attacks carried out on Easter Sunday on the island, for the most part exterminating the Catholic and evangelical faithful, during solemn Mass in Saint’Antony Sanctuary in the Kotahena district of Colombo, in Saint Sebastian church in Negombo and in Sion church in Batticaloa, as well as some western tourists in two luxury hotels.

«This is a time our hearts are tested by the great destruction that took place last Sunday. This is a time questions such as ‘does God truly love us’, ‘does He have compassion towards us’, can arise in human hearts» said the cardinal terribly grieved in the week following the massacre.

But in recent days the Archbishop of Colombo has intervened publicly to remind the institutions of the urgent commitment to understand «how the attacks occurred on April 21, 2019 and who helped the attackers».

The reference is to the nine suicide bombers belonging to the local Islamist extremist group “National Thawheed Jamaat” (NTJ) linked to ISIS.

«We will not hesitate to take to the streets to safeguard the rights of our people» said the cardinal speaking in Ragama, north of Colombo. Despite the investigation launched by Maithripala Sirisena, predecessor of the current president Gotabaya Rajapaksa, «the procedure now appears to be lacking in transparency. Some elements that must emerge are hidden: who was responsible? who helped the terrorists and kept in touch with them?» noted Monsignor Ranjith.

In February, the Sri Lankan government appointed a special six-member team to help police gather information on the devastating attack. President Rajapaksa announced he was «speeding up the ongoing investigation into the attack» by presenting himself as «a leader capable of stopping terrorism» during the election campaign last November.

This helped him win the election, triumphing over his rival Sajith Premadasa by a margin of over 1.3 million votes (52.25% of the vote against 41.99% of the closest rival).

As that time, as today, we highlighted the plots of a conspiracy that went far beyond the radical Sunni Muslim imam who organized the massacre with a team of other suicide bombers, including the sons of a wealthy entrepreneur already financier and militant in the national communist party.

From the first investigations, dangerous relations emerged between extremists, Islamic politicians and rulers who ignored the alert of Indian RAW intelligence. This is why the former president Sirisena was blamed hard on Sri Lankan politicians and media.

Among the suspicious ties of the rulers who did not take the alarm seriously there were also those with a Muslim tycoon in London believed to be among the financiers of a former British premier but also of some Islamic foundations which in turn supported terrorist organizations.

A few months later, along with the arrest of some accomplices of the Saudi-born terrorist, disturbing documents were covered which confirmed that Riad, Washington’s historic war ally, was perfectly aware of the attack and had alarmed the Columbus embassy to warn him his countrymen to keep away from Christian religious places on Easter day.

This is why it is no coincidence that a cardinal who experienced the pain of the bloody consequences of international conspiracies aimed at new geopolitical and military scenarios with the consequent enrichment, whatever the degeneration of the conflicts, the Weapons’ Lobby.

As highlighted in one of our latest investigations, the same warlords who speculate on the major defense corporations, tacitly authorized also to manufacture bombs in embargoed countries such as Yemen in violation of any UN resolution thanks to NATO aegis, are the same who invested in vaccine multinationals.

This is why Cardinal Ranjith does not seem to have doubts that the CoVid-19 pandemic is the result «of experiments by a rich and powerful nation. Some viruses we are talking about these days are the product of unscrupulous trials. We must ban this type of experimentation that leads to the result of loss of life and causes pain and suffering to all humanity».

The cleric’s comments came following the cancellation by the Sri Lankan church of masses and other services in all parishes, due to a rapid increase in coronavirus cases in the country.

On March 15, it announced that all religious services were suspended until the end of the month after the Minister of Education had ordered the closure of all schools, including Catholic ones, until April 20, while the government imposed quarantine, banning arrivals from 8 countries including Italy, the UK, Belgium and Norway.

In Sri Kanka at the moment only 28 cases of positivity have been confirmed, most of them the result of contagion by tourists from Italy.

«When man tries to change laws then what happens is a grotesque type of result. And we know that in various areas of this world, researchers of all kinds, for various reasons, are engaged in research that will destroy human life» said the Archbishop of Colombo during the press conference.

For this, reports the local press, the United Nations should open the investigation and bring the «perpetrators to trial for genocide» said the mons. Ranjith.

First the Chinese Communist Party, based on the opinions of scientists on the modeling of the S-Spike protein and on the two different genotypes of the virus isolated in Wuhan, one of which is much more aggressive and lethal, then the commander of the Islamic Revolutionary Guards of Iran, have supported what the Archbishop of Colombo declares today, convinced that Covid-19 is a man-made virus in the laboratory and not so much a virus that entered circulation through animal-human contact.

CoronaVirus BioWeapon – 2. Intel sources: «Spread by CIA with nano-Uav» as Cyber-DragonflEye. Alert in Iran and Italy

The intervention of Monsignor Ranjith obviously also contains a prayer to God: «I ask the Lord to come to reveal who sowed this poison». With Gospa News, Christian news webmedia, we are carrying out its mission in this sense.

In these days we have collected important new precious tiles to recompose the crazy and obscene mosaic of this biological war and we are preparing the most complete report which will be the synthesis of the three dossiers published so far with names of bodies and people involved.

Soon we will unveil the other links of the terrible conspiracy that hit China, Iran, Italy and the USA not by chance for a specific Deep International State plan, of which we have already envied some leading actors, of which we will outline every track, maybe tomorrow…