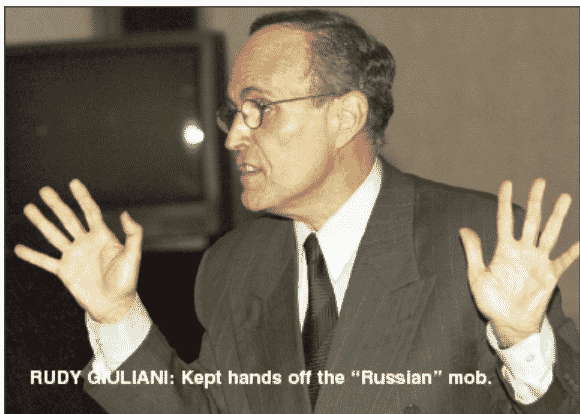 Our question is simple, when Roy Cohn, godfather of the New York mobs, died, did Rudy take over as handler for Donald Trump?

When famed alternative and revisionist historian and reporter Michael Collins Piper (1960-2015) died in 2015, rumors circulated that his death may not have been due to natural causes. Based upon the evidence we have gathered, murder does not appear to be the cause of death.
It is not as though some have tried to make the case. Writing within a week of his death, Gordon Duff, editor of VT, opined that the relatively young Piper was probably the victim of murder. The basic premise for the case for murder is that Piper was an outspoken critic of Israel and Jews who wouldn’t keep his mouth shut. Also, 3 weeks prior to his death, his cabin in Idaho burned down, after which he was living in a budget motel at the time of his death. The insinuation is that he escaped one assassination attempt, only to succumb to a second.”

Although the facts have been strictly ignored by the mass media— which lionizes Republican presidential hopeful Rudy Giuliani as “America’s mayor”—some 15 years ago, long before Giuliani became a household name, the Washington-based Spotlight newspaper exposed the big secret about Giuliani’s vaunted status as a “crime buster” during his earlier tenure as U.S. attorney in Manhattan, prior to becoming mayor of the Big Apple.

What Giuliani actually accomplished was to shut down decades-old, home-grown, primarily Italian- American criminal syndicates, setting the stage for foreign- born (primarily Jewish) gangsters—mainly from Russia but also including many from Israel (Giuliani’s favorite foreign nation)—to take over the operations previously controlled by the Italian groups.

NewYork tabloids entertained their readers with exciting stories about the famed “Five Families” of the Mafia as Giuliani and his prosecutors from the U.S. attorney’s office in New York launched a showy campaign against alleged Mafia figures, ultimately sending an assortment of high-ranking “bosses” off to prison, largely old and graying gentlemen whose day in the sun had long passed.

In the meantime, while the media (and Giuliani) were focusing on “the Mafia,” Jewish crime groups from Russia and Israel were beginning to flourish in the New York area (and elsewhere on American soil), perfectly positioned to fill the vacuum left by the demise of the old-time Italian syndicates.

The popular daily tabloids in Manhattan—The New York Post and The New York Daily News—which each have a far broader circulation than the mainline NewYork Times—helped make Giuliani a high-profile figure.

They hailed his courtroom combat with the old Italians, often pointing out the irony that it was an Italian- American who was bringing down the bad guys. But what the tabloids didn’t mention was that the Jewish crime bosses were moving into the void.

Critics note that these tabloids may have had a bias in that regard: the Post is owned by Rupert Murdoch, a devout supporter of Israel who is of partial Jewish descent, and the Daily News is owned by Mortimer Zuckerman, another pro-Israel hard-liner and former chairman of the Conference of Presidents of Major American Jewish Organizations.

While a few independent media sources have mentioned over the years that Sam Kislin—a Ukraine-born and now New York-based patron of Israel repeatedly linked to high-ranking figures in the “Russian” mob— raised more than $2 million for Giuliani’s intended (but aborted) bid for the Senate in 2000, the pivotal part that Giuliani played in destroying the Italian mob in New York—thus paving the way for the aggressive take-over of the New York rackets by the non-Russian “Russians” —is a sensitive area even many “alternative” journalists prefer not to address.

And the record shows that there is absolutely no question that elements inside the federal law enforcement community in the NewYork area at the time Giuliani was the big man on the scene were deliberately turning their eyes from the burgeoning activity of the “new” mobsters on the NewYork scene.

Most of the Jewish criminals arrived in NewYork from the Soviet Union when, in the early 1970s, the Soviet KGB emptied its jails of many of these hard-core criminals and allowed them to come to America in the much-hailed release of Soviet-Jewish “émigrés.”

The initial base of operations for the Jewish (so-called “Russian”) mob was the Brighton Beach area in Brooklyn, where vast numbers settled, establishing their own enclave. In the early 1990s alone, there were said to have some 300 “members” operating there—these numbers being larger than any of the more-publicized Italian- American Mafia “families” that Giuliani took to task.

However, Giuliani and the Justice Department “crime busters” who set the stage for the “Russian” takeover essentially looked the other way.

The late Robert I. Friedman wrote in his book Red Mafia that one of the leading figures in the syndicate, Shabtai Kalmanovitch, was also an operative for Israel’s Mossad. In addition, Friedman pointed out, other figures in the “Russian” syndicate, such as Joseph Kobson, have close political ties with (indeed strong influence over) the “right wing” Likud political bloc in Israel.

Friedman’s indictment of Israel’s entwinement—as a nation—with the “Russian” mob is telling indeed. Friedman wrote: “With two decades of unimpeded growth, the Russian Mafiya has succeeded in turning Israel into its very own ‘mini-state,’ in which it operates with virtual impunity. Although many in international law enforcement believe that Israel is by now so compromised that its future as a nation is imperiled, its government, inexplicably, has done almost nothing to combat the problem.”

Friedman pointed out that U.S. law enforcement—including the FBI—actually did little to impede the growth of the “Russian” crime syndicate while it was establishing itself on American soil. The reason, he said: “A large part of the problem was political: the Russian mob was predominantly Jewish.”

Friedman revealed that as far back as 1992, an FBI spokesman, Joe Valiquette, admitted that “The Russian mafia has the lowest priority on the criminal pecking order.” Concurrently, Patrick Cotter, one of the Justice Department prosecutors who nailed famed Italian- American crime figure John Gotti, frankly admitted to Friedman that “if we don’t begin to address the problem now, we’ll be running around asking ourselves how the hell this Russian organized crime got so big and how we can get rid of them.”

Cotter noted that while the FBI had squads targeting what were then the declining Italian-American “crime families,” there was no squad targeting the “Russian” crime figures. “There is your problem,” he said.

Cotter was saying that “The Russians started bringing in Israelis.” Of the Russian-Israeli alliance in the world of NewYork organized crime, Cotter said, “Their main thing is drugs. They are very, very tough. These guys are trained professional soldiers, and they are not afraid of anybody, including the Italians.”

What Cotter failed to say was that the gangsters were—and are—protected by the most powerful political force in the United States today: the Jewish lobby, represented by such groups as the Anti-Defamation League (ADL) of B’nai B’rith, a documented arm of Israel’s intelligence service, the Mossad, as well as the American Jewish Congress and the American Jewish Committee. The mass media, largely controlled by Zionist interests, has also redirected attention away from these elements. 