Jeff J. Brown is the author of 44 Days (2013) and Doctor WriteRead’s Treasure Trove to Great English (2015). In 2016 Punto Press released China Rising, Capitalist Roads, Socialist Destinations – The Truth behind Asia’s Enigmatic Colossus; and BIG Red Book on China (2020). Jeff is a contributing editor with the Greanville Post, Dispatch from Beijing. where he keeps a column, and is a Global Opinion Leader at 21st Century. He also writes a column for The Saker, called the Moscow-Beijing Express. Jeff writes, interviews and podcasts on his own program, China Rising Radio Sinoland, which is also available on YouTube, Stitcher Radio, iTunes, Ivoox and RUvid. Guests have included Ramsey Clark, James Bradley, Moti Nissani, Godfree Roberts, Hiroyuki Hamada, The Saker and many others. 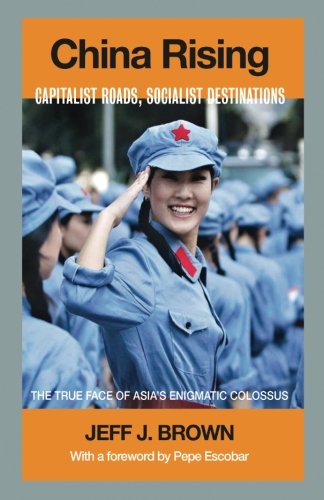 In China, he has been a speaker at TEDx, the Bookworm and Capital M Literary Festivals, the Hutong, as well as being featured in an 18-part series of interviews on Radio Beijing AM774, with former BBC journalist, Bruce Connolly. He has guest lectured at Beijing Academy of Social Sciences (BASS), as well as in various international schools and universities. He has been a guest on radio and television programs, like Press TV, The Daily Coin, Truth Jihad, Wall St. for Main St., KFCF FM88.1 and Crush the Street.

Jeff grew up in the heartland of the United States, Oklahoma, much of it on a family farm, and graduated from Oklahoma State University. He went to Brazil while in graduate school at Purdue University, to seek his fortune, which whet his appetite for traveling the globe.

This helped inspire him to be a Peace Corps Volunteer in Tunisia in 1980 and he lived and worked in Africa, the Middle East, China and Europe for the next 21 years. All the while, he mastered Portuguese, Arabic, French and Mandarin, while traveling to over 85 countries.

He then returned to America for nine years, whereupon he moved back to China in 2010. Jeff is a dual national French-American, being a member of the Communist Party of France (PCF) and the International Workers of the World (IWW).