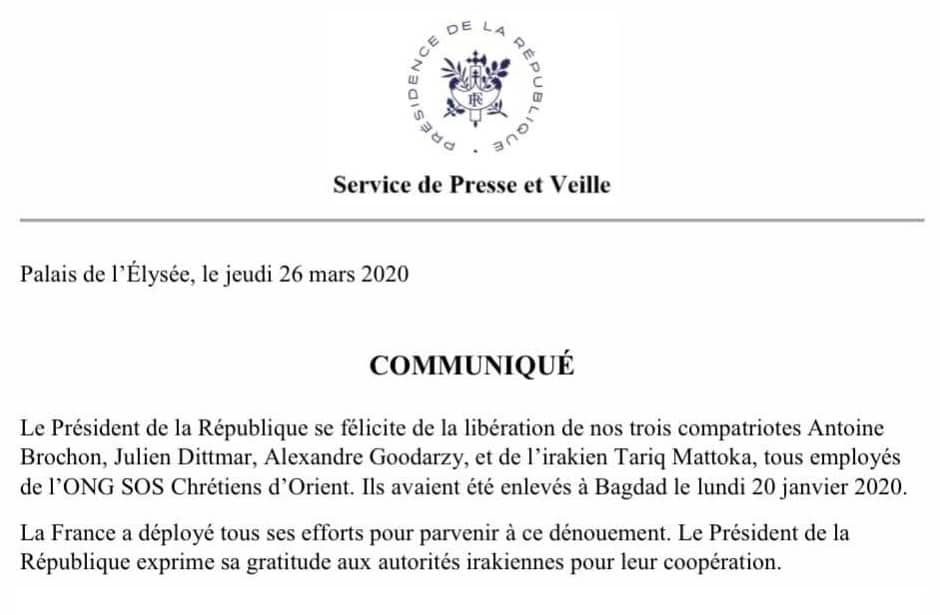 The terrible story of the four Christian operators kidnapped about two months ago in Iraq ends in the best way. It was French President Emmanuel Macron who released an official statement communicating the release of the activists of the Christian-based religious association SOS Chrétiens d’Orient based in Paris, also making known the names of the three French and their Arab colleague vanished in nothing last January 20 right near the French embassy in Baghdad.

«The President of the Republic welcomes the release of our three compatriots Antoin Brochon, Julien Dittmar, Alexandre Goodarzy and the Iraqi Tariq Mattoka» reads on the official statement released by the Elysée and posted by the NGO on his Twitter profile. «France has used all its efforts to achieve this result. The Republic expresses its gratitude to the Iraqi authorities for the cooperation».

There is the utmost secrecy about the release procedures as well as about the identity of the kidnappers, believed by the media of Islamic jihadists. It is highly probable that the release occurred after long negotiations and with the payment of a ransom. But this can hardly be known …

Disappeared into thin air. In the capital of Iraq, where since months are ongoing the protests of anti-government rioters, inside which killing mercenaries and ISIS terrorists have infiltrated, as denounced by the senior officers of the Iraqi Army in public statements reported by Gospa News.

Since Monday 20 January there is no more news about three French operators and one Iraqi of the Christian religious-inspired association SOS Chrétiens d’Orient based in Paris.

Just from the French capital on Friday, the general director of the NGO, Benjamin Blanchard, and Jeanne Der Agopian, the head of communications, held a press conference to bring the now worrying disappearance in Baghdad to the media.

After five days of total mystery about their fate, the cautious term “disappeared” can now be considered superseded by the most realistic and terrible definition of “kidnapped”.

SOS Chrétiens d’Orient he didn’t want to release the names or the photographs that certainly could have helped the searches. Confirming that there are probably already very delicate secret diplomatic activities in progress even if those respondents say they have not yet received any claim or request for redemption.

«For security reasons and in agreement with the authorities, we cannot communicate their identity at this stage. There are four experienced employees, in good health and with perfect knowledge of the crisis areas» specifies the Christian association.

At the moment it is only known that the missing operators are four men aged between 20 and 40. Further elements that confirm the seriousness of the “kidnapping” leaving open the vast field of hypotheses on who may have been to carry it out, even if the specter of ISIS hovers over the story …

«These collaborators had gone to Baghdad to carry out a series of administrative formalities: renew their visas and continue the procedure for registering the association with the Iraqi authorities. They also had to monitor the association’s operations in Iraq, including opening a new school» explained Blanchard and Der Agopian in the press release.

According to the reconstruction of the leaders of the French NGO, the four left their hotel without problems and headed by car to the French consulate, in the Green Zone of the super protected Iraqi capital after the escalation of international tensions between the US and Iran and the siege of the American Embassy from Shiite manifests.

But they never arrived at the French diplomatic headquarters.

They were expected at an appointment around 5 pm but didn’t show up and didn’t even come back to the hotel.

After several unsuccessful contact attempts throughout the day on Tuesday, we recorded their disappearance on Wednesday and then immediately notified the French authorities. Today the French and Iraqi authorities are coordinating to investigate and track them down» added SOS Chrétiens d’Orient.

To date, we have not received any ransom note, nor information on the fate of our four friends and associates. We are obviously in close contact with their families. The association and all our teams share their terrible concern, the official statement says – We specify that this mission was organized in perfect coordination with the French consular authorities in Iraq. All our employees lived in a hotel which is one of the establishments that regularly receive international staff and have followed a security protocol adapted to the region. 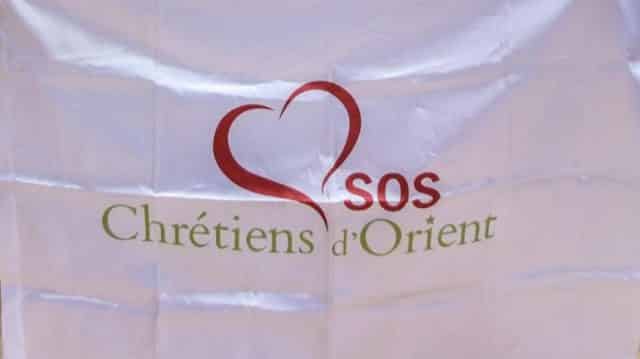 He has been working with persecuted Christians in Iraq since 2014, when Islamic State jihadists invaded the province of Mosul, killing, imprisoning or fleeing tens of thousands of Christians, Yazidis, and other minorities. It is mainly active in the Iraqi capital of Kurdistan Erbil, where many Christians have sought refuge.

Provides emergency aid in crisis areas. It also carries out projects related to economic development, education, cultural development and contributes to the construction or reconstruction of war-damaged areas.

SPECTRE OF ISIS BEHIND THE ABDUCTION

Their enigmatic kidnapping, treated with extreme confidentiality by the NGO and the authorities, takes place in Baghdad just a few weeks after the Iraqi journalist’s abduction taken from a commando in military action.

These details make their disappearance even more mysterious and make us fear, as already suggested by the French website Famille Cretienne, that they have been kidnapped for political reasons by some local militia or, I would add, an extremist faction such as that of the terrorists of the Islamic State, still well-rooted in Iraq as demonstrated by recent Gospa News reports.

It is unlikely, instead, that this is a paramilitary action in retaliation for the attack carried out by the US Air Force against the deputy commander of the Hashid People’s Mobilization Forces, Abu Mahdi al-Muhandis, killed near the airport of Tehran together with the commander of the Iranian Quds Forces Qasem Soleimani on 3 January.

At this moment, in fact, the Shiite component, after the pronouncement of the Iraqi Parliament for the withdrawal of the American soldiers and of all foreign NATO troops, is pushing for this result through politicians and the population, in an action that culminated in the peaceful demonstration of over a million people last Friday in Baghdad, and therefore diplomatic incidents cannot be allowed.

Indeed, the Hashid commanders reported the mobilization of terrorists of the Islamic State by the US army in the Al Anbar desert dates back to recent days..

ITALIAN AND IRAQI KIDNAPPED BY COMMANDS

The mysterious kidnapping brings to mind the case of the Italian co-worker Silvia Costanza Romano, 21 years old, kidnapped in a village in Kenya, near Malindi, on 20 November 2018, by men armed with Kalashnikovs, the AK 47 assault rifle commonly used by African and Middle Eastern jihadists.

The police and intelligence imposed the utmost confidentiality on the matter, also denying the rumors of kidnapping by Al Shabaab terrorists, the Somali rib of Al Qaeda.

An even more disturbing episode occurred precisely in Baghdad during the Christmas holidays which, due to security dangers, led the Chaldean Christians to cancel the Night Vigil Mass on December 24th by celebrating only the solemn function of December 25th.

The day after, around 10 p.m. in the evening, an Iraqi journalist Afrah Shawqi Hammudi was kidnapped from her home in a southern district of the capital by a veritable command of heavily armed men.

“Eight armed men raided his home in Saidiya, dressed in plain clothes and entered pretending to belong to the security forces – said an anonymous source from the Iraqi ministry in Agence France-Presse – They tied up his son and stole cell phones, computers and money before kidnapping Afrah and fleeing. ”

Hammudi, 43, works for Asharq al-Awsat, a London-based pan-Arab newspaper, as well as for numerous news sites, including Aklaam.

On Monday she published a stinging article on the website where she hit armed groups who “act with impunity” in Iraq. The prime minister, Haider al-Abadi, condemned her kidnapping and ordered the security services to do their best to find her and track down those responsible.

President of the Union of Iraqi Journalists Moaid Allami asked the Iraqi authorities to expedite investigations into the circumstances of the kidnapping, insisting on the need to arrest the perpetrators and prevent the recurrence of such incidents against journalists.

Regarding the disappearance of the French operators of SOS Chrétiens d’Orient, there are still no official communications on the INA pro-government website or other Middle Eastern ones

But the apprehension about their fate grows hour by hour.

Just today, on Sunday, some NGO volunteers took part in a Mass in the Greek-Melkite community of Beirut in Lebanon praying for the four human rights activists together with the numerous followers of the association’s Twitter profile who posted dozens of messages with invocations to God.

Even though their now evident kidnapping takes on mysterious and dramatic contours every hour that passes precisely because the Iraqi army spokesmen have reported the presence of mercenary killers armed with guns among the rioters during anti-government protests and in recent weeks they have been arrested of ISIS jihadist terrorists with Molotov cocktails.