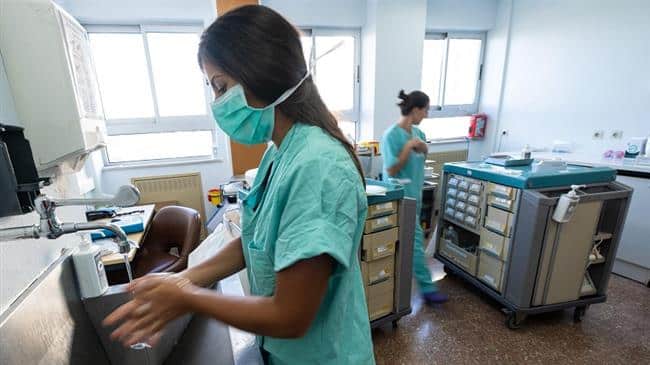 [ Editor’s Note: When the after action reports are done on the Covid pandemic, at the top of the list will be the charge that not even having enough protective gear in storage to protect the medical staff and first responders will be the hardest one to overlook. The cost would have been preferable as compared to the crushing blow to the financial pipeline now.

But that said, the British National Health system has been under strain for years, and with lots of news coverage about it. Setting aside funds for rainy day events is not easy politically when people are screaming for money for current needs.

Even Israel finds itself in a similar situation with today’s internal government report expecting up to 40,000 dead before it is over. And sadly that will include a share of the health care workers.

New York Orthodox Jews escaping from New York City were found to have Covid among many on the flights. They may have jumped from the frying pan into the fire.

We can expect to see the “triage” word in next week’s news, as demand outstrips supply, when not everyone will be able to get the necessary health care.

So far, Germany is an anomaly, with most of the infected people being younger and contributing to the low death rate. The nursing homes and assisted living facilities will become infected via their respective staffs unless tight discipline is in place, however, their staff might be down the priority line on getting protective equipment.

Easter Day on April 12th could be one to be remembered for a long time… Jim W. Dean ]

Chris Hopson, the chief executive of NHS Providers, which represents hospital bosses, asserts some hospitals in London have become inundated with a “continuous tsunami” of coronavirus patients and are likely to be overwhelmed within days.

Despite hospitals having expanded critical care capacity between five and sevenfold in the last weeks the rate at which beds are filling up in London has alarmed hospital CEOs, Hopson stated.

“They are struggling with the explosion of demand in seriously ill patients. They are saying it’s the number arriving and the speed with which they are arriving and how ill they are. They talk about wave after wave after wave. The words that are used to me are that it’s a continuous tsunami. As one said to me, it’s much bigger and large numbers with a greater degree of stretch than you can ever have possibly imagined.

“The CEOs are concerned that all that extra capacity is now being used up very, very quickly. We’ve got the surge capacity at the ExCel centre but this is filling up very quickly.”

He said this was forming a “wicked combination” with the problem of up to 50% staff sickness rates in some trusts, which is “an unprecedented absence rate”.

Earlier, he tweeted that the surge in demand for coronavirus treatment was “off the scale” in London already and it was “evident that a number of hospitals are on a trajectory where their critical care capacity will become full within a few days”.

He added: “London CEOs saying they urgently want a lot more of everything – staff, ventilators, critical care capacity, PPE, testing capacity – but they recognise that their job is to do absolutely the best with what they have got and that’s what they are focused on.”

Earlier this week a study by doctors warned that hospitals in England will run short of critical care beds for Covid-19 patients within the next fortnight if the numbers becoming severely ill reach those experienced in Italy.

A team at the University of Cambridge, in a paper published on Tuesday, concluded that five of the seven NHS commissioning regions will not have sufficient beds available in hospital intensive care units (ICUs) to deal with the rapid influx of Covid-19 patients requiring critical care within two weeks.

Prof Neil Ferguson of Imperial College, who is advising the government, however opined, very optimistically, on Thursday that the NHS will manage to get through the crisis without being totally overwhelmed.

“We are going to have a very difficult few weeks but we think overall with the capacity being rapidly put in place that whilst the health system will be stressed it won’t break,” he told BBC Radio 4’s Today programme.

The shadow health secretary, Jonathan Ashworth, has said that Labour finds it worrying that doctors and nurses were so short of protective equipment that some were resorting to sourcing goggles and masks from DIY stores.

Edward Argar, the health minister, defended the government’s ability to protect NHS staff, insisting that “masses of supplies” were being distributed by the army around the clock.

He insisted that testing for NHS staff was coming on stream in the weeks to come, following criticism that the government has been slow to ramp it up from around 6,000 a day up to a target of 25,000.

Who knows how many frontline NHS personnel, highly skilled medical professionals, doctors, nurses and technicians, may contract Covid-19 and perish within the “weeks to come”, as the Right Honourable Health Minister, Edward Argar, put it.