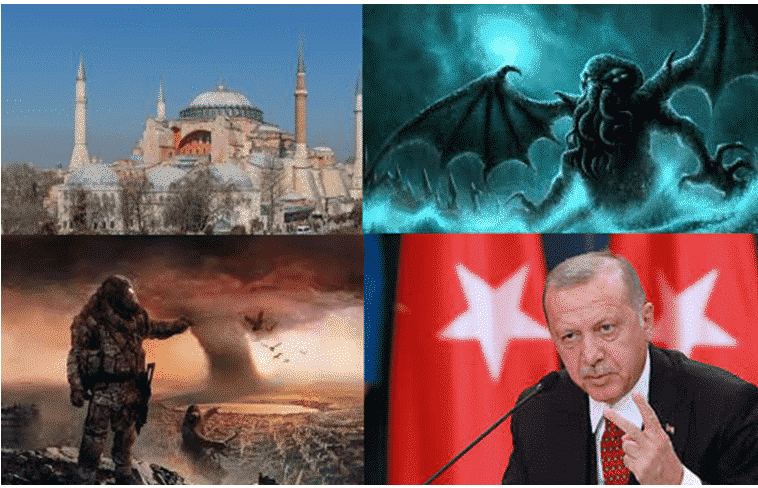 Dagon (Dagan) – the West Semitic god, the national god of the Philistines after their conquest of Canaan. It is mentioned in Akkadian sources and texts of Mari, Ugarit and Ebla. Outwardly, Dagon resembles the hero of Oannes, who, according to the Sumerians, is described as a creature with a human head and a fish body. Dagon is the “food-giver”, the god of agriculture, fish farming, rain, fertility. Myths say that he invented the plow, taught the first people to sow grain and bake bread. In the Bible, Dagon is associated, according to folk etymology, with the Hebrew word dag (fish) and is described as a half-human half-fish. In The Cthulhu Myths, Dagon is a fantastic god of fish and the leader of amphibian humanoids.

Nowadays, a new Dagon has appeared – this is the President of Turkey Erdogan. The surname Erdogan is of ancient Aramaic origin. In ancient times, Aramaic was very common in the Middle East. The surname “Erdogan” is the Aramaic name “var Dagon”:

Like the ancient Dagon, in whose possessions the Ark of the Covenant ended up, in the possessions of Erdogan is another shrine – the church of Hagia Sophia in Kostantinopol (Istanbul). There are many Russian and Greek prophecies that the Russians will conquer Constantinople from the Turks and restore the Byzantine Empire. These prophecies say that a war will begin between the Greeks and Turks. Then the Russians will enter this war on the side of the Greeks and defeat the Turks.

Recently, Greece has concentrated a large number of its troops and ships on the Greek-Turkish border. Bulgaria also helps Greece as part of its troops. The Greeks do not want to let migrants flee from the conflict in Syria. The situation there is very tense.

The army of the new Dagon (Turkish army) has recently begun to destroy the coronavirus. The Turks attracted many young Uighurs from East China for the fighting. In Syria, the Uighurs learn to fight, because the Chinese oppress their people. These Uighurs brought the coronavirus to Turkey. China contains a limited military contingent in Syria. They seek to destroy the Uyghurs because they do not want these trained fighters to return to China and start fighting there.

New Dagon will be punished again. The Christian shrine, the church of Hagia Sophia in Constantinople, will be returned to Christians.