[ Editor’s note: It was a change of pace to be on a Debate Show with Scott Bennett, especially on the Gordian Knot Afghan War mess. I am not optimistic about a good ending, referring to all three parties as the “gang that can’t shoot straight”, since they can not achieve their goals with hopeless strategies.

The US engaging the Taliban in talks was initially a good move, but when Pompeo conceded to continue talks with the Taliban condition they would never talk directly to the Kabul government, any positive outcome went down the drain.

It was an open admission that the Kabul government was a US puppet and Pompeo was negotiation on their behalf, sort of. Then the US made mistake number two was committing Kabul to a quick prisoner exchange where Kabul held five times as many as the Taliban.

For two groups that hate each other, a staggered release proposal would have at least had some chance of success. That said, the Taliban’s strategy has always been to drag the war out until the US got tired of it and the Kabul regime would collapse. So why should the Taliban negotiate, when it thinks it can wait and regain the whole country again?

And then we had the two Kabul government contenders claiming not only to have won the last election, with both holding their own inauguration ceremonies. This had the Taliban jumping for joy. With a divided enemy, why should they cut Kabul any slack when they were slicing each other up? They immediately began new attacks on Kabul forces.

If the US wants rare earth minerals out of Afghanistan, it would have been more economical to buy them from whoever the government was at market prices rather than trying to control the whole country and its resources, which includes the $100 billion drug trade that the MSM does not even mention anymore.

Pompeo sent a clear message to the two Kabul president squabblers by cutting a billion dollars in US support, with threats of more cuts if they don’t get their act together to form a coalition government. That was an ouch moment for them… Jim W. Dean ] 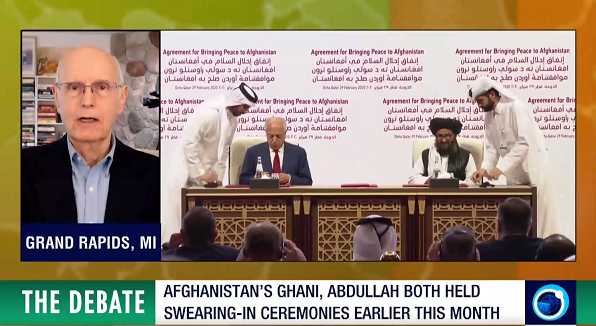