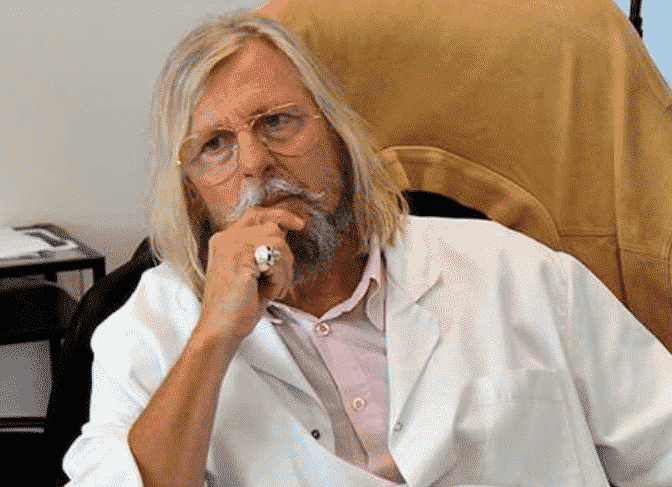 PANAMZA INFO. Didier Raoult, infectious disease specialist and star defender of the controversial use of chloroquine against the coranavirus, is a specialist in terrorism as well as a fervent supporter of the IDF. Revelations.

Slowly but surely, his image as a rebel-against-the-health-authorities is being forged, according to official announcements of the growing number of deaths in France.

He already embodies, in the eyes of his many fans on social networks (especially the Soralians who have been praising him for weeks on their E&R site), a kind of messianic anti-hero, able to resist the State to save a humanity suffering.

The first hexagonal promoter  (and insistent ) of the ( risky ) use of chloroquine against the coronavirus , the Marseillais Didier Raoult , quick to publish a book on the coronavirus, is more complex and ambiguous than it seems.

Who could guess that he was officially charged, in the aftermath of the Israeli-American mystification of September 11 , to write a detailed report worthy of an intelligence soldier on bacteriological terrorism?

Better still: under its appearance of half-Asterix half-professor Sunflower hides a particularly radical cantor of Israel, this regime which quickly announced a vaccine against Covid-19 .

So much so that he was rewarded in Tel Aviv, ten years ago, by a famous family of Zionist billionaires close to the neoconservatives and involved in a serious pharmaceutical crisis in the United States …

Panamza suggests that you judge for yourself by consulting below each of the sources corroborating such allegations.

Didier Raoult frequents a Zionist mafia: we talk about it?

PANAMZA INFO. Adored as a guru, the doctor Didier Raoult, promoter of chloroquine against Covid-19, maintains “personal” ties with a Jewish and pro-Israeli communitarian who was convicted of “crime scene modification”. Revelations

Fear of a new “great plague” paralyzes some and unleashes in others passionate passions.Monday March 23, following the publication of my article on Didier Raoult and his connection with the Zionist movement, I received a cart of profanity profaned – via Facebook – by its followers (immediately banished from the Panamza page).
http://www.panamza.com/230320-chloroquine-raoult-israel/Don’t tell them that the two big companies in the world manufacturing chloroquine (Teva and Mylan) are, like the other, closely linked to Israel: they will stumble on “conspiracy” …

Today, Tuesday March 24, I drive home the point by exposing new information which will not fail to displease this sect in the making.

Key reminder: I am not discussing here the controversy over the real efficacy of choloroquine against the coronavirus, having no scientific competence on the subject. https://www.lemonde.fr/sciences/article/2020/03/24/coronavirus-les-experts-face-a-la-fievre-de-la-chloroquine_6034180_1650684.html

By cons, investigating the ideological profile and political connections of its main promoter in France should be a minimum union for any journalist detached from the crazy adulation that now accompanies this character.

A fortiori when it is a researcher long supported by the ultra-Zionist Christian Estrosi who ostensibly displays the posture of a scientific dissident before releasing this week a book promoted by Le Point, magazine of the Marseillais ultra-Zionist Franz -Olivier Giesbert…
https://www.lepoint.fr/politique/christian-estrosi-il-faut-faire-confiance-au-professeur-raoult-23-03-2020-2368348_20.php
https: //www.lepoint .fr / health / exclusive-extracts-from-the-next-book-of-professor-raoult-24-03-2020-2368629_40.php
https://www.facebook.com/panhamza/photos/a.259863080821062/1298466163627410/

Let’s go straight to the point: husband of psychiatrist Natacha Caïn and father of psychiatrist Lola Raoult-Cohen, Didier Raoult maintains, for a long time (and again last Sunday), close and “personal” ties with Zvi Ammar, crooked businessman (who exploits poor Maghreb people https://marsactu.fr/les-freres-ammar-jouent-au-bonneteau-avec-un -taudis-de-belsunce / , radical Zionist, traveling companion of the Franco-Israeli group Torah Box (yes, yes: that of the fundamentalist rabbi David Touitou of the Bataclan affair…) and president of the regional consistory who was sentenced in 2016 to from suspended prison for recovering bags of banknotes from the scene of an assassination…https://www.20minutes.fr/marseille/1942495-20161014-marseille-president-consistoire-israelite-ecope-8-mois-sursis (note that Bernard Cazeneuve, however Minister of the Interior and key man of the 2015 attacks, had not hesitated to show him his esteem during a particularly zealous meeting with the local Crif).
https://www.youtube.com/watch?v=l42abaTaljI

And that’s not all: in addition to his singular connection with a family of American Zionist billionaires (who were accused of having sold a deadly pharmaceutical product in the United States) who rewarded him in Tel Aviv, Raoult also benefits from the patronage (dispensed at its Marseille center http://www.panamza.com/230320-chloroquine-raoult-israel/ of another pro-Israeli billionaire (and French, this time) which, strange coincidence, played a role key to the foundation of the Franco-Chinese laboratory in Wuhan, epicenter of the pandemic https://www.panamza.com/280220-vaccin-coronavirus-israel/

To be continued, only on Panamza…

https://www.panamza.com/240320-raoult-mafieux-sioniste/
ATTENTION READERS
Due to the nature of independent content, VT cannot guarantee content validity.
We ask you to Read Our Content Policy so a clear comprehension of VT's independent non-censored media is understood and given its proper place in the world of news, opinion and media.