Home Government Elections Can Bernie Break From His Hamlet Complex? 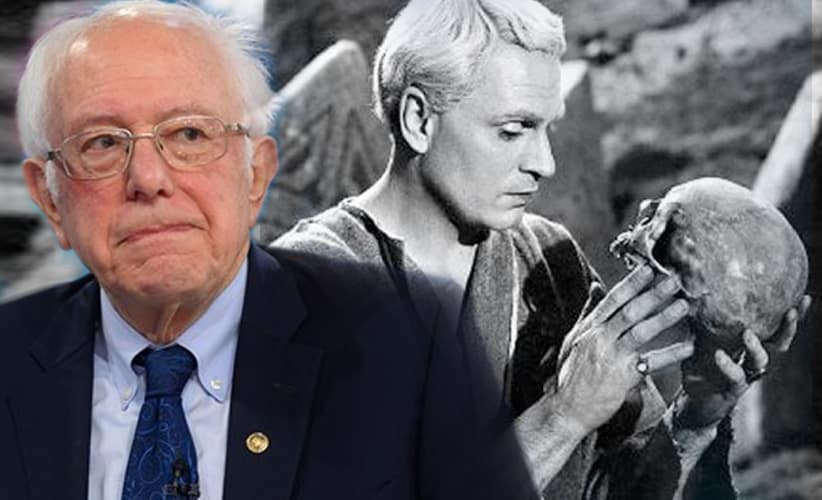 The fact that America needs a major change in healthcare is indisputable, and Bernie Sanders has made a career promoting the idea that socialism may not be antagonistic to the American way of life in the modern era. As the fear of a new pandemic spreads through the global psyche, serious discussion is now occurring about what role government must play in dealing with this crisis.

The deep state tied to the Bill and Melinda Gates Foundation, Michael Bloomberg School for Public Health at John Hopkins, CIA and World Economic Forum obviously would like nothing more than use this crisis to impose a world government and finally rid the world of “outdated nation-states”. These four organizations co-sponsored the “Global pandemic” exercise called Event 201 on October 19, 2019, to deal with the “hypothetical” global spread of the coronavirus.

Others would prefer nation states take the reins in defense of their own citizens without a world government running the show from above. I think that Bernie Sanders would generally be placed in this category.

One thing is certain: The current American healthcare system and de-industrialized economic sector cannot handle any outbreak and desperately needs to be reformed. Universal healthcare is thus a no-brainer and the current crisis may force that “socialist” reality onto America.

Observing Bernie’s behavior over the past years, I am having a very hard time believing that he has the capacity to really carry out those noble goals he has tirelessly promoted for decades for the simple fact that he suffers from a very serious Hamlet complex.

In Shakespeare’s Tragedy of Hamlet, the young prince has good reason to believe that his newly deceased father (the king of Denmark) has been murdered by his Uncle- who also just so happens to have married the Queen (Hamlet’s mother) before his father’s body was cold.  Hanging above the entire play like a sword of Damocles is an invasion planned by Norway, which is preparing to take over the kingdom.

As the play unfolds, the young prince battles with himself. As a man loved by the people with a strong moral instinct and heir to the throne, he has great power and responsibility to be Denmark’s leader and raise resistance to the coming onslaught. His elderly uncle will not live much longer and real political power is at his fingertips.

On the other hand, his burning passion to revenge his murdered father is all-consuming and blinds him to his higher moral duties both to himself and the people.

This schism between two opposing worlds is displayed perfectly in the famous soliloquy where the young prince asks whether he will choose “to be” or “not to be”.

In the end, the young Prince is incapable of breaking from his fears of potency and actually being a historic man. The soliloquy ends with Hamlet saying:

“Thus conscience does make cowards of us all,
And thus the native hue of resolution
Is sicklied o’er with the pale cast of thought,
And enterprises of great pitch and moment
With this regard their currents turn awry
And lose the name of action.”

The prince gives into his impotent fears and chooses instead “not to be”, giving into his base impulses for revenge which he knows will lead to his own destruction.  After this soliloquy, Hamlet’s fate (and that of Denmark’s) is sealed and the tragedy runs its course.

Unlike most figures campaigning for political office with noble intentions, Bernie has been granted several chances to wrestle with his own fears of success and take a leading role in American politics, but up until now, he has chosen “not to be” each time.

The first chance arrived famously in 2016, just as WikiLeaks exposed the sickening reality that the entire deep state apparatus controlling the DNC had conspired blatantly to crush his chances of gaining the party nomination to run in the elections. With the righteous indignation of a disenchanted democratic voter base behind him, Bernie knew that he had a peoples’ army on his side, as well as irrefutable evidence of a conspiracy to destroy his candidacy in favor of Hillary.

Had Bernie chosen “to be”, then he would have easily swept the elections. But that required intention and courage, two qualities the 2016 Bernie lacked and he demonstrated that by pitifully endorsing the murderous Hillary Clinton.

By some miracle, Bernie again found himself placed in front of another deep state tool four years later as the democratic primaries had narrowed the playing field down to just two individuals: Creepy Joe Biden and Bernie.

Suddenly, as if through divine intervention, Bernie was given a second chance to retake his failed moral test of 2016 and make amends with the conscience that earlier made a total coward of him.

This divine intervention took the form of the Democratic National Committee’s blatant blocking of Tulsi’s right to speak in the March 15 debate with a last-minute change in the rules forcing any eligible candidate to have over 20% of the delegate votes.

Bernie had the chance to stand for justice by defending Tulsi’s right to speak and expose the evil agenda of the deep state that had unjustly conspired to destroy his own campaign in 2016. Doing this would have moralized the democratic base profoundly and given the people something to actually believe in. This would have demonstrated that Bernie had the moral capacity to withstand the slings and arrows of the outrageous fortunes of the deep state and carry out the type of reform he had spent a lifetime campaigning for.

But instead, Bernie chose the easy path of not being once again and rendered himself impotent and obsolete by stroking Biden and letting Tulsi hang in the wind.

Perhaps fate will give Bernie yet another chance to redeem himself. Perhaps this path is still available to the old socialist campaigner who might still take a lesson from Trump and go on the offensive against the Deep State. Perhaps this new potent Bernie will take the strength he gains from this crisis and turns the laws of the nation against the Wall Street/City of London shadow government and in defense of the people the way Franklin Roosevelt had done with the crisis of the great depression and rise of fascism in his day.

Or perhaps the old socialist has become too encrusted in the identity of a lifelong “campaigner against injustice” but fearful of actually winning. Perhaps years of studies of Marx’s cynical theory of class struggle have broken the old socialist’s belief in America’s constitutional form of government in ways too grave to heal. Of course, his stated ideals assert his belief in this republican system but his cynical inner beliefs that presuppose constant revolution and resistance against the bourgeoisie forbid a faith that one man can actually use the system to win real power and defeat the evil he knows exists within America’s structures of power.

One thing is certain: A new collapse is coming on and the coronavirus (whatever its origins) is being used to trigger that collapse. Within the battle that is now emerging between genuinely non-tragic leaders of nation-states like Vladimir Putin, Xi Jinping and a growing array of others, no Hamlet can be expected to steer America through the oncoming storm and into safety.

Act 3, Scene 1 Soliloquy
To be, or not to be, that is the question:
Whether ’tis nobler in the mind to suffer
The slings and arrows of outrageous fortune,
Or to take arms against a sea of troubles
And by opposing end them. To die—to sleep,
No more; and by a sleep to say we end
The heart-ache and the thousand natural shocks
That flesh is heir to: ’tis a consummation
Devoutly to be wish’d. To die, to sleep;
To sleep, perchance to dream—ay, there’s the rub:
For in that sleep of death what dreams may come,
When we have shuffled off this mortal coil,
Must give us pause—there’s the respect
That makes calamity of so long life.
For who would bear the whips and scorns of time,
Th’oppressor’s wrong, the proud man’s contumely,
The pangs of dispriz’d love, the law’s delay,
The insolence of office, and the spurns
That patient merit of th’unworthy takes,
When he himself might his quietus make
With a bare bodkin? Who would fardels bear,
To grunt and sweat under a weary life,
But that the dread of something after death,
The undiscovere’d country, from whose bourn
No traveller returns, puzzles the will,
And makes us rather bear those ills we have
Than fly to others that we know not of?
Thus conscience does make cowards of us all,
And thus the native hue of resolution
Is sicklied o’er with the pale cast of thought,
And enterprises of great pitch and moment
With this regard their currents turn awry
And lose the name of action.