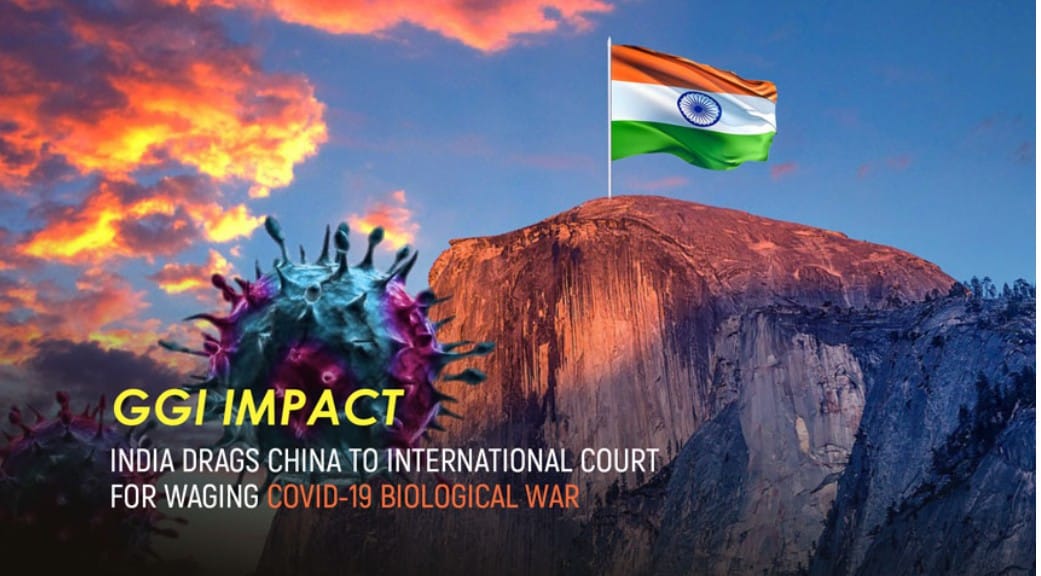 As a direct impact of extensive GreatGameIndia reporting on the sinister aspect of Coronavirus being manufactured as a biological weapon, now India has dragged China to international court for waging COVID-19 War. India’s complaint to the United Nations Human Rights Council seeking compensation from China specifically presents as evidence  GreatGameIndia‘s report on how Chinese biowarfare agents stole Coronavirus from a Canadian lab and weaponized it at Wuhan Institute of Virology.

In addition to the Indian complaint, a $20 trillion lawsuit has also been filed against China for waging a Biological war in Texas Federal Court, alleging that it unleashed the coronavirus as a bioweapon upon the world.

GGI has come under massive attack for reporting these stories from so-called fact-checker organisations like NewsGuard who themselves are funded by Bill Gates to clear their name. The mainstream media owes GGI a big apology for slandering our name, failing to ask the basic question of ‘conflict of interest’.

The International Council of Jurists (ICJ) and All India Bar Association have moved the United Nations Human Rights Council seeking compensation from China for “surreptitiously developing a biological weapon capable of mass destruction.”

The complaint was penned by senior advocate Adish C. Aggarwala, the Chairperson of All India Bar Association and President of International Council of Jurists, in the backdrop of the spread of deadly coronavirus, which has claimed thousands of lives across the world.

“It is humbly prayed that the UNHRC may be pleased to enquire and direct China and to adequately compensate international community and member states, particularly India, for surreptitiously developing a biological weapon capable of mass destruction of mankind,” Aggarwala stated in the complaint.

The advocate demanded remuneration from China for inflicting serious physical, psychological, economic and social harm on the world. Aggarwala also pointed out the effects of the pandemic on the Indian economy, the imbalance in demand and supply of commodities and migration of marginalized people.

“It remains a mystery as to how the virus has not spread to all provinces of China but at the same time, has spread to all countries in the world. The speculation only increases the likelihood of the COIVD-19 being a carefully assembled biological weapon, aimed at crippling major countries in the world leaving only China as the beneficiary,” the complaint pointed out.

The complainant further claimed that the virus was developed in the Wuhan Virology Lab from where it was carefully deployed to affect a miniscule 0.001% of the Chinese population.

He said that the neighboring country deployed the coronavirus virus in a bid to control the economy of the world by buying up stocks from countries that are on the brink of economic collapse.

The Chinese government had deliberately censored information and hid the early warnings given by Dr. Li Wenliang, who was, in fact, reprimanded and initially punished by local authorities in China, he said.

How China Stole Coronavirus From Canada And Weaponized Ithttps://t.co/tc7W2DrmAA

“The government also did not sufficiently contain and curb the travel of infected persons from further contaminating the world.”

It complaint states that the Chinese government has meticulously planned the execution and spread of the Novel Coronavirus and the same can be inferred in the way China has taken regard of the situation as also of the curious case of the spread of the virus all over the world. As pointed earlier, it remains a mystery as to how the virus has not spread in all provinces of China but at the same time, has spread to all countries in the world.

The complaint further presents as evidence findings of GreatGameIndia‘s investigation cited by India’s national daily on how Chinese biowarfare agents stole Coronavirus from a Canadian lab and weaponized it at Wuhan Institute of Virology.

A group of Chinese scientists in Canada were accused of spying and were stripped of their access to Canada’s National Microbiology Lab, sometime in August 2019 and the said lab is known to contain some of the world‟s deadliest pathogens. These scientists then were sent to a High security biochemical Wuhan Lab, which is one of the world‟s most heavily guarded labs. That these scientists later developed the COVID-19 virus and released it to the outside world somewhere in the early days of December 2019 in Wuhan, from where the virus spread.

Further the complaint also blasts the mainstream media’s agenda for suppressing these facts being raised by prominent experts and influential personalities worldwide.

The purpose of developing such a potent and deadly virus remains a secret. However, there are solid evidences to show that the Chinese government intends to utilize the same to take control of the world’s economy. The hypothesis of biological warfare behind the global pandemic had already been raised by Russian experts some weeks ago.

Like any opinion that is slightly different from the official version of Western governments and their media agencies, the thesis was ridiculed and accused of being a “conspiracy theory”. However, as soon as the official spokesman for the Ministry of Foreign Affairs of the second largest economic power on the planet publishes a note attesting to this possibility, it leaves the sphere of “conspiracy theories” to enter the scene of public opinion and official government versions.

In addition to the Indian complaint to the United Nations Human Rights Council, a $20 trillion lawsuit has also been filed against China for waging a Biological war, alleging that it unleashed the coronavirus as a bioweapon upon the world by U.S. lawyer and conservative activist, Larry Klayman, his Company Buzz Photos and his group Freedom Watch.

In the lawsuit, Klayman argued that because China had already agreed by Biological Weapons Convention treaty to outlaw such weapons c. November, 1984, these actions cannot be official governmental actions of the People’s Republic of China and therefore, China cannot claim legal immunity from the class action lawsuit.

Klayman added in a statement, “There is no reason why the American taxpayer should, contrary to the establishment in Washington, D.C., have to pay for the tremendous harm caused by the Chinese government. The Chinese people are a good people, but their government is not and it must be made to pay dearly.”

Klayman is seeking $20 trillion in damages and has called for affected Americans to sign up at his website Freedom Watch USA and become part of the class action lawsuit. The case has been filed in a Texas Federal Court.

Klayman is not the only one calling out China’s Biological Warfare activities. Chinese mishandling of the virus has attracted global criticism and numerous prominent personalities have come forward urging the international community to conduct an investigation into these serious matter and take action.

<iframe
For latest updates on the outbreak check out our Coronavirus Coverage.Send in your tips and submissions by filling out this form or write to us directly at the email provided. Join us on WhatsApp for more intel and updates.GreatGameIndia is a journal on Geopolitics and International Relations. Get to know the Geopolitical threats India is facing in our exclusive book India in Cognitive Dissonance. Past magazine issues can be accessed from the Archives section.