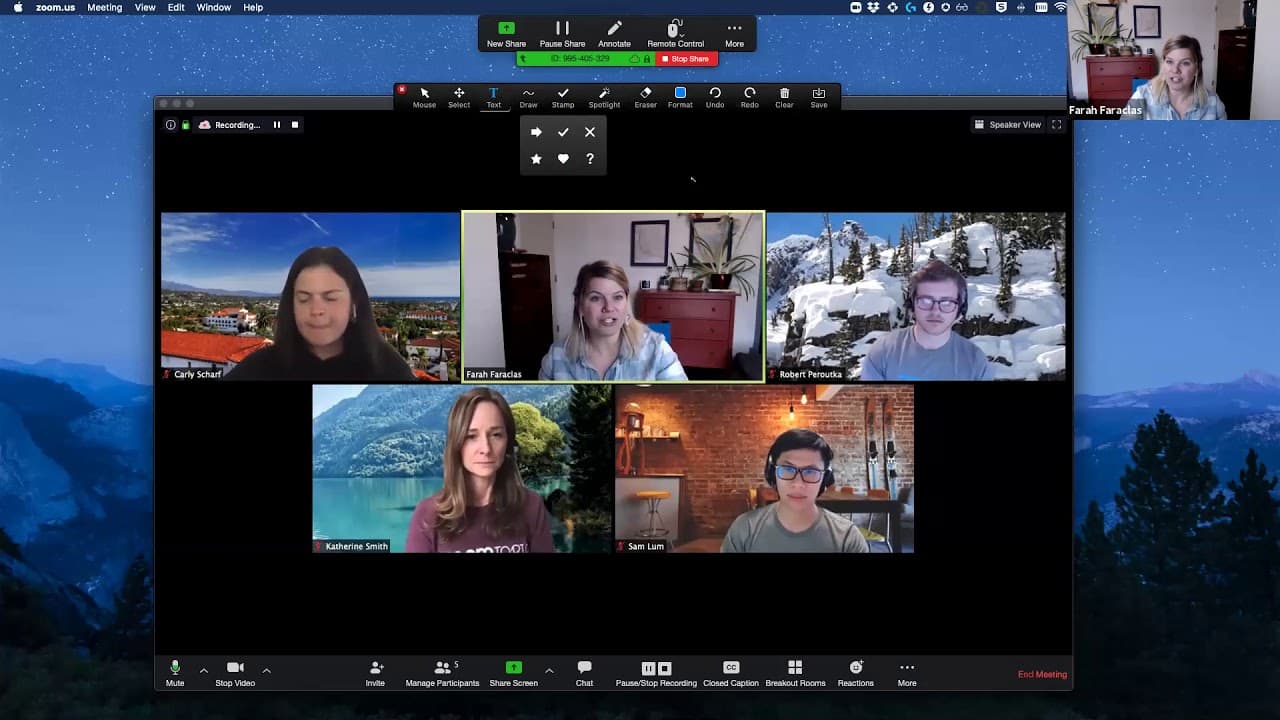 
Virtually everyone is now using Zoom, which has suddenly become “the most popular video-chat application in the United States.” It seems to be an upgraded version of Skype.

Technology is indeed great and allows people to have access to very good information. It is because of technology that you are reading this article. That great was impossible centuries ago.

Everyone should enjoy technology because it allows the dissemination of information. But are the oligarchs, the Deep State, and indeed social engineers using apps to surreptitiously invade the privacy of people virtually everywhere?

That shouldn’t be a surprise at all. For we know that Facebook, Skype, LinkedIn, Google, and other companies have relentlessly invaded the privacy of their users. Zoom is no exception. The Washington Post has recently published an article entitled, “Thousands of Zoom video calls left exposed on open Web.” It states:

“Thousands of personal Zoom videos have been left viewable on the open Web, highlighting the privacy risks to millions of Americans as they shift many of their personal interactions to video calls in an age of social distancing. Videos viewed by The Washington Post included one-on-one therapy sessions; a training orientation for workers doing telehealth calls that included people’s names and phone numbers; small-business meetings that included private company financial statements; and elementary school classes, in which children’s faces, voices and personal details were exposed.

“Many of the videos include personally identifiable information and deeply intimate conversations, recorded in people’s homes. Other videos include nudity, such as one in which an aesthetician teaches students how to give a Brazilian wax…The discovery that the videos are available on the open Web adds to a string of Zoom privacy concerns that have come to public attention as the service has become the preferred alternative for American work, school and social life. The company reached more than 200 million daily users last month, up from 10 million in December”[1]

The Post also declares that Zoom has been inundated by “Zoom-bombing trolls,” people who “have invaded unlocked Zoom meetings to share pornography and spew racist slurs.”[2] Zoom executives responded by saying, “We do not sell your personal data.” Yet “Prior to the update, the same policy literally read ‘depends what you mean by ‘sell.’ Despite no mention of the practice in Zoom’s privacy policy, the iOS app sends data to Facebook, even if users don’t have a Facebook account.”[3]

This is not new at all. Remember what happened in 2002 in the Middle East? Right after Israeli military forces took over Palestinian TV stations in Ramallah in the West Bank, they immediately shut down all other TV stations and started broadcasting pornography.[4]

The institute—like self-styled “unconventional feminist”[8] professor Shira Tarrant, who keeps talking about a need for pornographers to produce “fair trade, ethical content”[9]—was essentially supporting the oligarchic system and oppressors of this world. In fact, Nadine Strossen, author of Defending Pornography, endorsed Tarrant’s book by saying that the book “provides an accessible overview of key concerns that face parents, educators, the curious, and the concerned.”[10] Similarly, Ronald Weitzer, author of Legalizing Prostitution, declares: “Tarrant’s analysis is consistently evidence-based, and the evidence presented challenges many of the conventional myths regarding the content of pornography and its effect on those who produce and consume it.”[11]

The institute was defending the money that the pornography industry is making from enslaving society. In fact, the pornography industry has a $97 billion revenue every year.[12] Politico magazine calls this “an economic behemoth”[13] which “could have a bigger economic influence on the US than Netflix…five of the 50 most trafficked websites in the United States belong to the adult industry.”[14]

Going back to our previous question: why were the Israelis broadcasting pornography when the Palestinians were forced to stay home? Or could it be that pornography is actually slavery? According to the moral order, the answer is yes, it is slavery. Even politically corrupt people like Irving Kristol knew that. Kristol even asked for censorship way back in 1971. He wrote in the New York Times:

“If you believe that no one was ever corrupted by book, you have also to believe that no one was ever improved by a book (or a play or a movie). You have to believe, in other words, that all art is morally trivial and that, consequently, all education is morally irrelevant. No one, not even a university professor, really believes that. To be sure, it is extremely difficult, as social scientists tell us, to trace the effects of any single book (or play or movie) on an individual reader or any class of readers. But we all know, and social scientists know it too, that the ways in which we use our minds and imaginations do shape our characters and help define us as persons.”[15]

He moved on to say that both pornography and obscenity “can or will brutalize and debase our citizenry.”[16] The interesting thing is that Kristol published his article in the New York Times without telling us who is actually behind the business. Decades later, E. Michael Jones came on the scene and agreed with Kristol. Jones took the argument further by producing a plethora names.[17]

Jones was immediately called an anti-Semite for producing historical evidence showing that polite people in this world are deliberately bringing back slavery in the twenty-first century via pornography. Jewish scholar Nathan Abrams took Jones’ article and cited it as evidence that the Khazarian Mafia indeed controlled the sex industry.[18] Abrams was highly praised in a scholarly journal and even in a book published by Rutgers University Press, but Jones was still an anti-Semite!

In any event, we need to keep in mind that research on the link between pornography and sexual decadence has been growing for decades.[19] Several scientific studies have shown that it leads to sexually aggressive behavior.[20] Even Politico declared two years ago:

The British newspaper, the Telegraph, put out an article in 2017 entitled, “The scary effects of pornography: how the 21st century’s acute addiction is rewiring our brains.” It read:

“A report in 2014 found a link between watching unprotected sex occur on screen and going on to have unprotected sex in real life, for instance, while the number of women who underwent a ‘labiaplasty’ – a surgical procedure to reduce the size of the vaginal opening – rose by almost 40% last year in the US, and is believed to be elected by women wishing to look more like the often cosmetically-enhanced performers.

“Porn-watching was linked to infidelity in another study, again American, which found that seeing multiple sexual partners on screen subtly wounds a committed relationship by convincing the watcher that the grass will be greener on the other side, no matter how happy you are with your current situation. The conviction of Jamie Reynolds, who murdered 17-year-old Georgina Williams in Shropshire in 2013, brought the topic acutely into public debate. Reynolds, a court heard, had been watching extreme pornography immediately prior to strangling Williams to death.”[22]

Cambridge anthropologist J. D. Unwin noted back in 1934 that out of eighty-six civilizations he had thoroughly examined, one of the elements that led to their eventual collapse was sexual promiscuity and deviancy,[23] something that Friedrich Nietzsche would have agreed with. And we all know how this moral misbehavior has negatively impacted families and decent lives. Even Ross Douthat wrote in 2002:

What does that have to do with the evidence? Why didn’t Douthat refute the evidence itself?

Anyway, let’s ignore him here. Pornography was even viewed as a drug more harmful than crack cocaine.[26] One particular expert in the branch of medicine, Jeffrey Satinover of Princeton, declared that pornography “does what heroin can’t do.”[27]

Research has shown that pornography initially gets people interested in having sex, but in the end it destroys the natural way of making love.[28] Some neurosurgeons such as Donald L. Hilton of the University of Texas have even gone so far as to say that prolonged exposure to pornography can cause brain damage.[29] In 2014, the Telegraph declared:

In a nutshell, pornography promotes an appetite for sexual destruction. As the Telegraph itself put it last year, “After consumption, studies suggest that male users are more likely to trivialise sex or even support violence against women.”[31] Augustine made it clear centuries ago that lust makes one blind, and once that happens, the person in question can literally be controlled by unbridled passion—be it sexual or lucrative.[32]

The solution? Let’s take it from the Sydney Morning Herald itself: it is “time to ban pornography.”[33] If pornography is banned, then who would be petrified and having a heart attack? The oligarchs. Take it from the Baltimore Sun: banning child pornography, we were told way back in 1993, “would have posed some interesting problems for executives from Coppertone to Calvin Klein.”[34] Why?

Well, they make their fortune surreptitiously producing it.