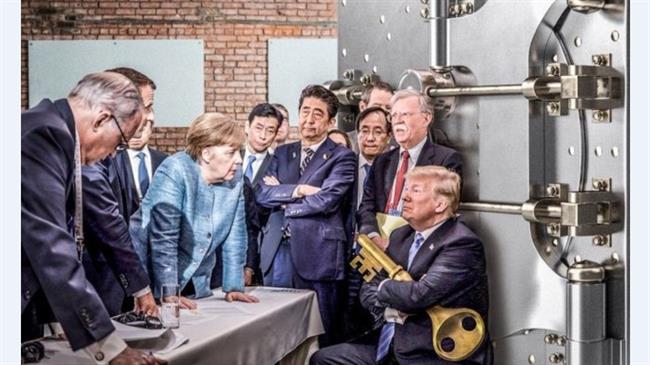 [ Editor’s Note: Trump is the odd man out now on his position of maintaining full sanctions on Iran during a pandemic, which is not only going to have major health consequences but financial ones that could take a generation to recover.

US prestige as the world leader is way out on a limb on this one. Sure, the magic box that the Treasury Department has to pour $16 trillion into not only the banking system but also the financial trading system is a financial power beyond the rest of the world.

But the future of US trading relationships is at risk here, as at the end of the day when all or most of the potential customers are broke or struggling to provide basic necessities, they are not much of a market for US exports.

The Trump gang strategy seems to be to bring Iran down at all cost, not only at cost of the Iranian people but the region. The only justification seems to be because it is viewed was the only way for the US to survive juggling its massive debt via a giant PacMan game of gobbling everyone else up.

Whatever is left of the Iranian domestic opposition will have the mark of Cain on it for having been the ally of the US in its attempt to crush Iran. It will be a stain on the scale of having supported Saddam’s use of chemical weapons against the Kurds and the Iranians.

Unknown by most Americans, the captain of the US destroyer who shot down the Iranian civilian plane was actually decorated for defending his ship and never had the good sense to return the medal afterwards, a permanent stain on him and the US Navy to this day.

And yes, yours truly had not caught that when it happened. On my trip to Iran, after the New Horizon Conference ended, they split the group into 20 or more small teams to go out for a few days to speak to a mix of civic groups.

I met younger people who remember cowering in shelters while chemical weapons missiles were raining down on their cities, and they asked me why the Navy captain was “decorated”. I of course had no answer, but it was a memorable experience for me… Jim W. Dean ]

President Hassan Rouhani has warned the International Monetary Fund (IMF) to consider Iran’s request for $5 billion without “discrimination” after reports said the US was seeking to block the loan.

While the IMF has said it is in dialogue with Iranian authorities to understand Iran’s needs and what is required for Tehran’s demand to be processed, several reports say the fund is under the US pressure to forego the request.

“We urge all international organizations to fulfill their legal duties. Iran is a member of the International Monetary Fund and the World Bank and has always paid its shares; some of our resources are at their disposal,” Rouhani said on Wednesday.

“If there is to be discrimination between Iran and other countries, it is not tolerable for us and the world’s public opinion,” the president added.

Iran is currently the worst-hit country by the coronavirus in the Middle East, where the respiratory disease has killed more than 3,800 people and infected over 62,000 others.

“We haven’t asked for anything from this fund for the last 50 years even as we have fulfilled our obligations. If they [IMF] do not fulfill their duties in these difficult circumstances, the world will have a different take on this issue,” Rouhani said.

Will IMF stand up to US bullying?

Secretary of Iran’s Supreme National Security Council Rear Admiral Ali Shamkhani said over the weekend that the United States was using its clout within the IMF to stonewall the loan request.

The US has the largest number of shares within the IMF, giving it 16.5% of the body’s total votes. Technically, other IMF member countries could amass a majority of votes to approve Iran’s loan even with US opposition. The Europeans and many other countries have reportedly come out in favor of the loan.

“Many countries around the world and thinkers have also stated that the International Monetary Fund must fulfill its obligations to the Iranian people,” Rouhani said.

Iran’s Vice President for economic affairs Mohammad Nahavandian said Tuesday night that the US has no right to block the loan after US media reports said Washington planned to veto the Islamic Republic’s request.

“No country in the International Monetary Fund has the right of veto and the IMF’s policy is to be fair in assessing and approving loan requests,” Nahavandian told CNN’s Christiane Amanpour.

“When we face the outbreak of disease worldwide, it is important to understand each other and if the disease is not contained in a part of the world, we actually help its spread in other parts of the world,” Nahavandian said.

“Therefore, this is not an internal issue; rather, it is a global issue that should be taken into serious consideration,” he added.

Several reports, however, cited US officials as saying that the Trump administration was adamant in its opposition.

A State Department spokesperson justified its opposition by claiming that Iran was “seeking cash to fund its adventurism abroad, not to buy medicine for Iranians”, Al-Monitor reported.

President Rouhani said the American rulers will carry “the historic shame for retaining their pressures on the great Iranian nation in these conditions”.

“America has always been a unilateralist and in this disease case, it continues with the same wrong trend and inaccurate thinking,” he said.

“This is a historic issue. History will remember that the White House, which has been a terrorist in economic matters, is also a terrorist in medical matters,” the Iranian president added.

Tehran is specially incensed by the US government’s offer of help and sticking to its “maximum pressure” campaign at the same time. Since the coronavirus outbreak, the Trump administration has imposed at least three rounds of new sanctions targeting trade with Iran.

President Donald Trump brazenly said last week that the US had no “moral responsibility” to halt Iran sanctions if Tehran did not ask for it to fight the pandemic.

“No, no, no, they didn’t even ask me about it,” Trump said on Thursday during a press briefing of the White House Coronavirus Task Force when asked if he had a “moral responsibility” to lift the sanctions.

The US president added that he would only consider “helping” Iran if “they asked”. Iranian authorities have dismissed the offer as hypocritical “words without action” and have urged the international community to act against Washington’s “economic terrorism” amid the pandemic.

Navandian told CNN, “Despite the rhetoric that food and medicine is not subject to sanctions…all banks and financial institutions have been subject to a blackmailing by the United States’ government.”

“So in reality, the provision of medical supplies has been very difficult and very costly,” the official said, explaining that transactions costs are exerting a “double” pressure on Iran in its fight against the new coronavirus.

Rouhani said the US government is violating the World Health Organization (WHO)’s 2005 plan, requiring countries to cooperate before and during pandemics.

The Iranian nation, he said, has been resilient throughout history, and it will bear up again this time.

“We continue to have good relations with other countries and our friends. We produce our needs inside and supply others from outside. For foreign exchange, the Central Bank provides it and we supply the necessary goods.”

Iran sanctions are quickly becoming a presidential campaign issue in the US, with Trump’s rivals calling on him to extent exemptions within the US sanctions regime to help fight COVID-19.

On Monday, two dozen former senior American and European officials urged the Trump administration to relieve the draconian sanctions, saying it could “potentially save hundreds of thousands of lives in Iran”.

“Targeted sanctions relief would be both morally right and serve the health and security interests of the United States, Europe, and the rest of the world,” a statement by the group of 24 former NATO secretary generals, UN and EU senior officials and foreign and defense ministers said.

How to Choose an Online Casino Based on Your Preferences