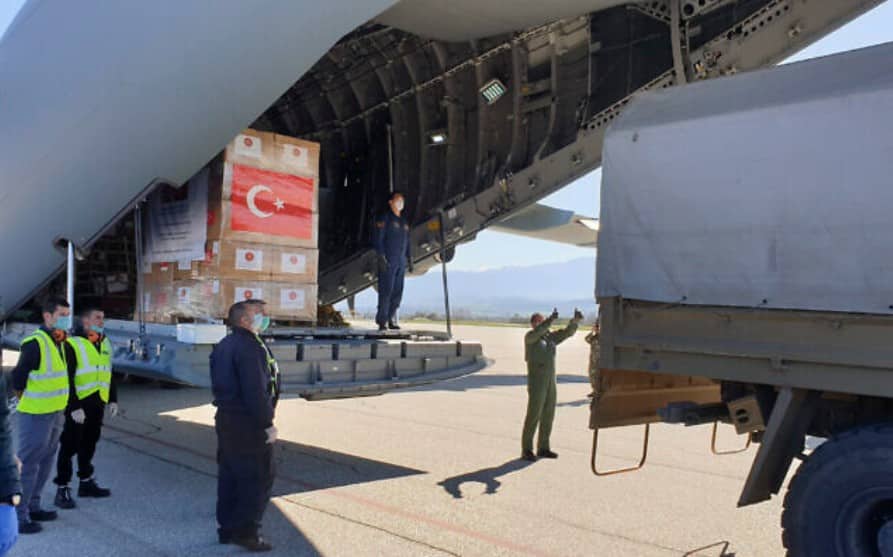 The report quoted an unnamed senior Turkish official as saying that Ankara had approved the sale of medical equipment to Israel for humanitarian reasons and that Jerusalem would reciprocate by allowing similar Turkish aid to the Palestinians.

Turkish military plane left Ankara this morning to deliver medical aid to the United Kingdom in fight against #COVID19.

However, Israeli sources told the Hebrew-language Ynet news site that the report was inaccurate — that the deal was commercial, not humanitarian, in nature and that there was no connection to aid to the Palestinians.

According to Bloomberg, the Turkish official said that three planes from Israel were to have landed Thursday at the Incirlik air base, which is also home to a US Air Force contingent, to pick up the cargo. The official said Turkey would donate medical aid to the Palestinians within the next few days.

Relations between Israel and Turkey soured after President Recep Tayyip Erdogan took power in 2003 and hit a nadir in 2010 after the Mavi Marmara incident, in which Israeli commandos boarded a ship trying to break the maritime blockade of Gaza and killed 10 Turks after coming under attack with clubs and iron bars.

Despite the souring of ties, trade — with the exception of military sales — between the two former strategic allies has remained robust. Turkey was Israel’s No.7 export destination in 2019.

Turkey has provided protective equipment to over a dozen nations hard hit by the coronavirus crisis, including to five Balkan countries, Spain, Italy, the United Kingdom and the United States.

Turkey’s own COVID-19 death toll has continued to rise. The country recorded 96 deaths on April 9, taking the total toll to 908, with the number of confirmed cases increasing by 4,056 to 42,282, according to figures released by the health ministry in Ankara.