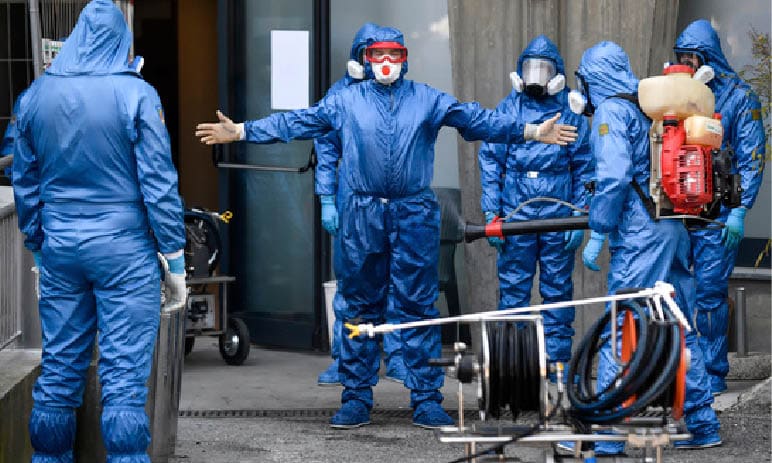 «The dead are 18,279, but this number can be confirmed only after the Istituto Superiore di Sanità has established the actual cause of the death». It is the latest note released by RAI News in relation to the report released yesterday, Thursday 9 April, by the Civil Protection on the victims of CoVid-19 (or Sars-2) in Italy.

This data, in addition to confirming the increase of over 500 deaths a day that does not stop, such as that of the new infections now reached 96,877, triggers an enigma already reported by Gospa News in the previous report on the mysterious cremations of the victims of Bergamo sent with the Italian Army truck in Emilia Romagna with the emergency procedure and without an autopsy.

How will the ISS determine the reasons given that in most cases, in order to avoid infection risks for health workers in the light of 105 dead doctors, those necropsies are not carried out which in Wuhan have instead allowed to ascertain the existence of two different genotypes of this new CoronaVIrus, including the much more lethal “L” type?

“The analysis is based on the data contained in the ISTAT medical records and death cards containing the causes of death of these patients. Data collection takes place via the web platform http://covid-19.iss.it, already used by the national, epidemiological and virological surveillance of COVID-19 cases in Italy (coordinated by the ISS and activated by the Ministerial Circular of 22 January 2020, n.1997) “.

The answer comes from the official website of the Italian Superior Health Institute but is certainly not able to explain at least 5 deaths that occurred in Bergamasco, in the small town of Gromo, the subject of various articles published by Russian media and on two qualified portals of counter-information: one Swiss and one Canadian.

«Doctors fighting infections in Lombardy have revealed new COVID-19 features. In the Italian city of Gromo, there have been several cases where people infected with coronavirus, without any serious sign of the disease, simply fell asleep and did not wake up. In one of the local hospice where volunteer doctors work, also from Russia, at least five of these strange patients died on the last day».

This disturbing report comes from the popular Russian newspaper Moskovsky Komsomolets MKRU which then pauses to describe the valuable activity carried out by the Moscow medicals military, experts of NBCR (Nuclear Bacteriological Chemical Radiological) emergencies, in the province of Bergamo, where, at the time of the article of the At the beginning of the month, 14 other nursing homes had been sanitized together with Italian doctors.

«For disinfection, a solution of 70% alcohol, hydrogen peroxide and sodium hypochloride, that is ordinary bleach, is used. Of course, our biosafety experts also have other special additives and ingredients. Together, this chemical cocktail is guaranteed to instantly kill a dangerous virus» reports the post explaining that Russian operators wear special suits for «biological protection with forced air supply and multi-level filters».

CoronaVirus – 8. Exclusive: “Russian Mission for Cleaning Italy and World from a Bio-Weapon”

The mystery of Gromo, a municipality of 1,202 inhabitants before the epidemic, was also reported by the other Russian site Regnum.

«In Lombardy there have been unusual deaths from a new type of Coronavirus. Indeed, elderly patients, in whom the disease was mild, died in their sleep. This was reported by Moskovsky Komsomolets – popular Russian newspaper, editor’s note – with reference to Russian military doctors who fight coronavirus in Italy»

«The people who were diagnosed with coronavirus infection simply fell asleep and never woke up, they occurred in the city of Gromo. At the same time, it is noted that no symptoms suggesting a fatal outcome have occurred in such patients. Over the past day, at least five of these “strange” deaths have been recorded».

This enigmatic story has not escaped Swiss Propaganda Research, a research and information project on geopolitical propaganda in the Swiss and international media. All studies and contributions were created by a politically and journalistically independent research group with no commissions or external funding. A Helvetian medical posted about the Italian mistery.

«In the city of Gromo, for example, according to reports from the newspapers, there have been several cases in which people presumably infected with the Coronavirus simply fell asleep and no longer woke up – wrote the Swiss site among the notes on 3 April of the pandemic diary also republished by Canadian site Global Research.ca – Until then, no serious symptoms of the disease had been observed in the deceased. As the director of the nursing home later clarified in an interview with RIA Novosti, it is unclear whether the deceased were actually infected with coronavirus, because nobody in the nursing home had been tested for this».

The news leaked from unofficial sources are fragmentary and contradictory in some details. Precisely for this reason we report them in their essentiality without any comments whatsoever. Also because we have not yet been able to receive an answer to the nursing home’s telephone number, but we thought it important to report these international articles.

The topic of suspicious deaths was also raised by a Venetian entrepreneur who has business interests in the Bergamasco and therefore he was informed by some medical friends of this truly anomalous situation so much to launch a petition on Change.org in support of the concerns for other mysterious deaths outsourced by the Mayor of Albino.

«In Albino, one of the largest centers in the lower Val Seriana, in 2019, from 23 February to 26 March, there were 25 deaths. This year 145, of which only 30 are attributed to Covid. For the mayor, Fabio Terzi, the accounts do not return: “Mathematics is not an opinion. We have mobilized since 23 February, when the first two cases appeared in Nembro. Probably the establishment of a red zone would have contained the infection”» wrote Andrea Lieto.

«On March 31, 2020, Fabio Terzi, Mayor of Albino, during an interview with Corriere TV, declares that following an analysis conducted with registry officials, there was a strong discrepancy between the official data and the data. real that does not allow to establish the real cause of death of 90 fellow citizens »remarks the entrepreneur who, in response to one of our emails, also signals another further anomaly highlighted by the Mayor of Bergamo, Giorgio Gori.

«Gori also issued statements in which he referred to 200 deaths in his municipality for which the causes of death were not specified – recalls Lieto – On the basis of this news I presented the petition because I believe that in the interest of the community, the mayor of Albino should be given the opportunity to obtain all the clarifications he asks for».

«With this petition we ask the mayor of Albino to take action, as the highest municipal health authority, to obtain medical records or any other document useful for determining the causes of death of all his fellow citizens” reads the text published on Change.org.

«In special cases such as deaths reported by Russian doctors, autopsies should then be arranged – adds the entrepreneur – If the willingness to allow all possible investigations is not clear, the attempt to hide something serious will be evident, such as experiments with radio frequencies».

At the moment there are no elements to support this disturbing hypothesis ventured by the author of the petition only by virtue of his friendships with authoritative Lombard doctors and his international activity in the ecological field.

The equally disconcerting fact remains that so far no Italian authority or media has reported those five victims who have been the subject of various articles in the Russian and other media. We will investigate this as we did in the 10 reports that supported the pandemic theory triggered by a bacteriological weapon on WuhanGate affair.