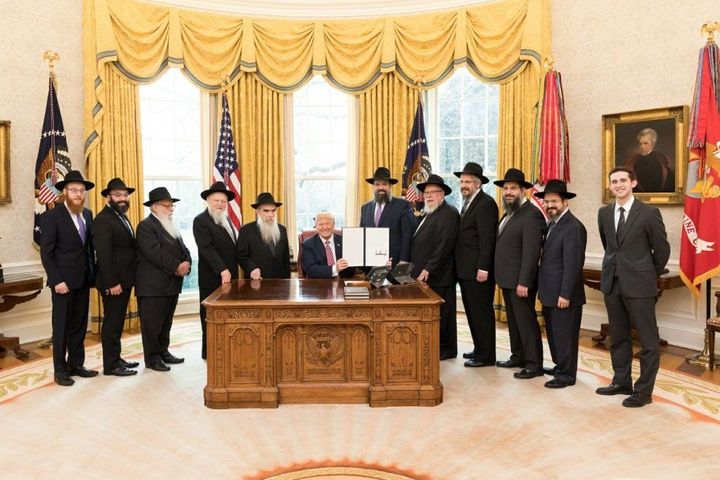 Donald Trump, like many of his predecessors, proclaimed back in 2018 an “‘Education and Sharing Day’ to honor the late Rabbi Menachem Mendel Schneerson and promote intellectual pursuits.”[1] Schneerson has been named “the most influential Jewish leader of the 20th century.” Trump declared then:

“Throughout his long and distinguished life, Rabbi Schneerson inspired millions of people, across multiple generations, through his example of compassion, wisdom, and courage in the face of oppression.

“He recognized that access to education, paired with moral and spiritual development, could transform the world for good, and he devoted his life to these principles. His commitment to invest in the lives of the next generation led to the establishment of academic and outreach centers to help grow and engage young minds and provide them with spiritual and material assistance. Thanks to his drive and dedication, these educational and social service centers can be found in every State and throughout the world.”[2]

“The difference between a Jewish and a non-Jewish person stems from the common expression: ‘Let us differentiate.’ Thus, we do not have a case of profound change in which a person is merely on a superior level. Rather, we have a case of ‘let us differentiate’ between totally different species. This is what needs to be said about the body: the body of a Jewish person is of a totally different quality from the body of [members] of all nations of the world…The Jewish body ‘looks as if it were in substance similar to bodies of non-Jews,’ but the meaning…is that the bodies only seem to be similar in material substance, outward look and superficial quality.

“The difference of the inner quality, however, is so great that the bodies should be considered as completely different species. This is the reason why the Talmud states that there is an halachic difference in attitude about the bodies of non-Jews [as opposed to the bodies of Jews] ‘and their bodies are in vain’…An even greater difference exists in regard to the soul. Two contrary types of soul exist, a non-Jewish soul comes from three satanic spheres, while the Jewish soul stems from holiness…

“The body of a Jewish embryo is on a higher level than is the body of a non-Jew…We therefore ask: Why should a non-Jew be punished if he kills even a non-Jewish embryo while a Jew should not be punished even if he kills a Jewish embryo? The answer can be understood by [considering] the general difference between Jews and non-Jews: A Jew was not created as a means for some [other] purpose; he himself is the purpose, since the substance of all [divine] emanations was created only to serve the Jews.

Schneerson also said: “An even greater difference exists in regard to the soul. Two contrary types of soul exist, a non-Jewish soul comes from three satanic spheres, while the Jewish soul stems from holiness.” produced these hateful and racist comments in his own book, which has never been translated to English. Thanks to academics Israel Shahak and Norton Mezvinsky who read the book in Hebrew, we were able to understand the pernicious and racist ideology which stems from Schneerson’s pen. Shahak and Mezvinsky write:

“Almost every moderately sophisticated Israeli Jew knows the facts about Israeli Jewish society that are described in this book. These facts, however, are unknown to most interested Jews and non-Jews outside Israel who do not know Hebrew and thus cannot read most of what Israeli Jews write about themselves in Hebrew.”[4]