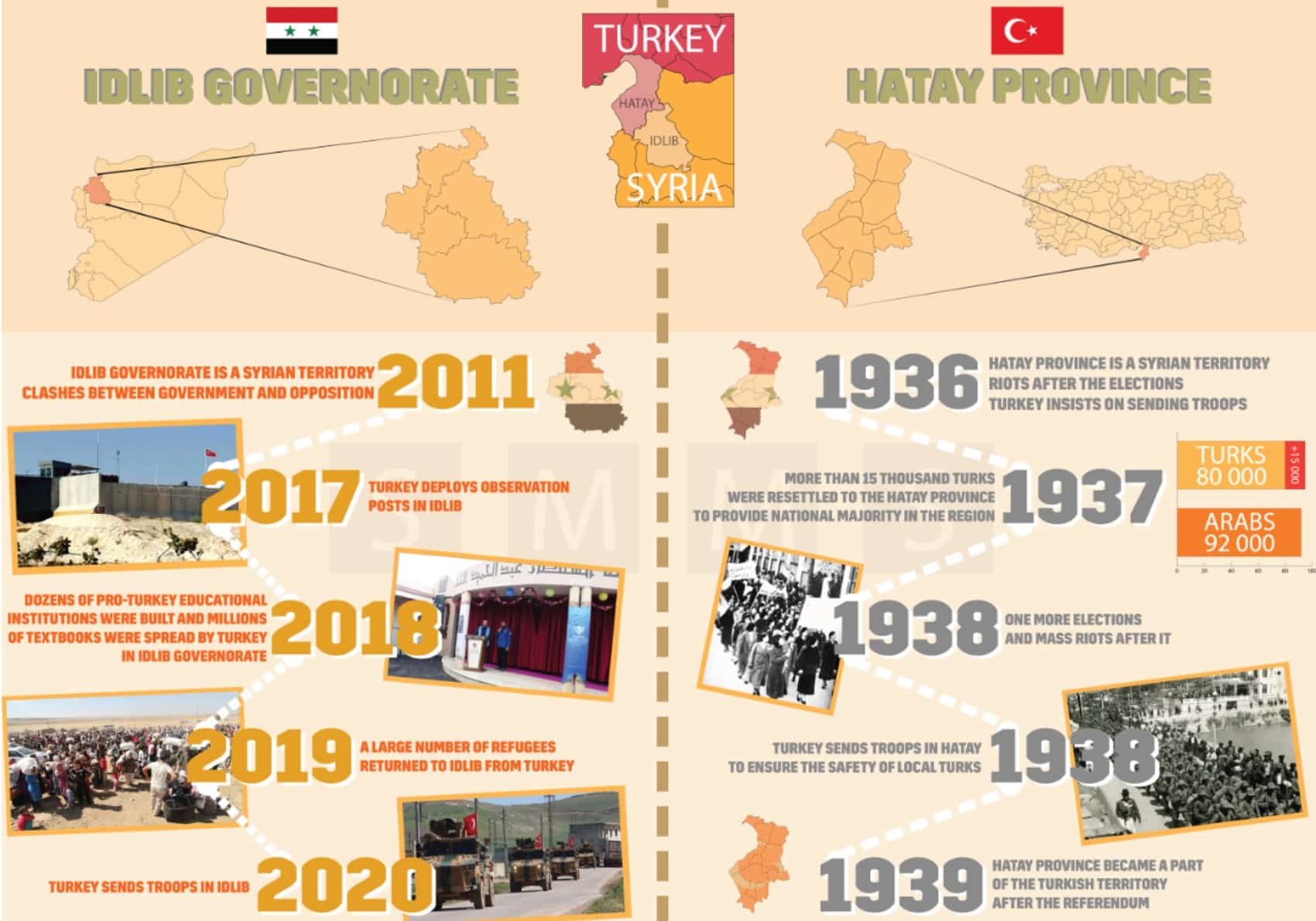 The world has witnessed an increasingly incoherent and aggressive policy pursued by the Turkish government recently. Erdogan wants to spread Turkish influence in the countries that were part of the Ottoman Empire by all available means.

Ankara on the way to achieving its goals has no qualms about undermining the UN arms embargo in Libya and the reconciliation agreements in Syrian Idlib. It is clear that Erdogan seeks to dramatically strengthen Turkey’s role, to restore the economic and political power possessed by the Ottoman Empire during its heyday.

This can be seen in current events as well as in comparative-historical analysis of the policies pursued by the Ottomans in the 20th century and the Turkish government nowadays.

The annexation of Hatay province by Turkey in 1939 is a clear example of this. The steps that Ankara had taken during the annexation of this Syrian territory seem very similar to the current attempts to seize Idlib and interfere in Libyan internal affairs.

Figure 1. Analysis of Turkish politics in Hatay and Idlib

Besides, it is worth noting that Turkey is pursuing its selfish interests in Libya, pulling both national troops and Syrian mercenaries to Libya to support its puppet regime of the Government of National Accord led by Fayez Sarraj. Erdogan considers Libya to be a strategically important outpost that would allow to impose his interests in North Africa, particularly in Egypt, and strengthen his influence on the Mediterranean trade routes. This long-term policy is aimed to establish a total control over the Libyan territory and its energy resources.

In this regard, Turkey and Libya signed Ankara-proposed memorandum on demarcating the maritime border between the two countries. This treaty has made it much easier for Turkey to deploy military personnel and equipment in the African continent. This comes at a time when the whole world is struggling with the coronavirus pandemic. And even a terrible disease can not stop Erdogan from implementing his imperialist plans. The Turkish leader is ready to sacrifice both Turks and Libyans.

Moreover the memorandum violated the economic borders of a number of countries such as Greece and Cyprus. This move reveals Erdogan’s firm determination to reach his goals, regardless of international law and other nations’ interests. He desires to become a regional hegemon able to run the Middle East and Mediterranean political processes.

No doubts, such an invading and savage policy of the Turkish leader must be judged. Exploiting of the pandemic and interference in the internal affairs of the other countries, violating the international law, are not acceptable. The Age of Empires is gone and Ottomans’ time has passed too.