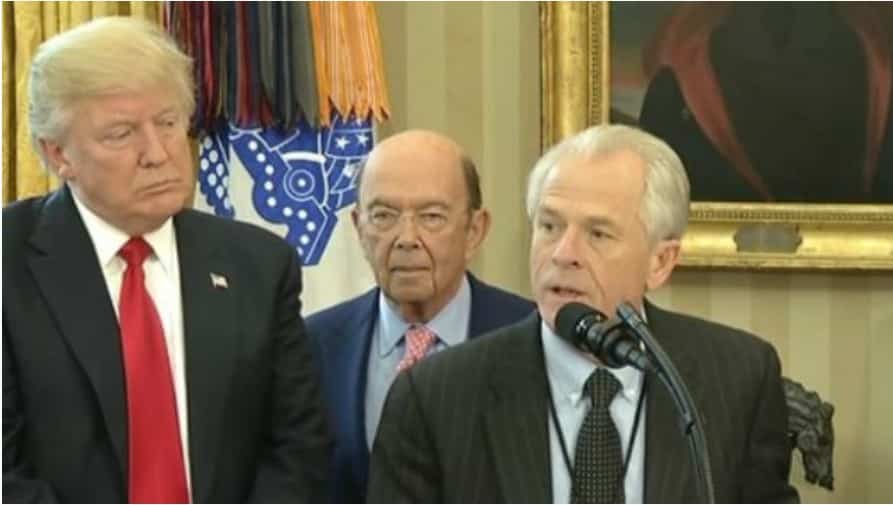 Navarro?  He isn’t an economist.  He isn’t a real author.  He is a nutty blogger and lifelong failure who pushes hate and racism against the Chinese.  He has a home now with Donald Trump while America is dying.

For many years now, it has been obvious that in both North America and Europe, smearing and provoking China has become an extremely lucrative business, even career. There are entire ‘institutes’ and NGOs dedicated strictly to such activities, and there are individuals who are groomed to become anti-Chinese warriors.

Peter Navarro, a neo-con and a right-wing combatant, has been, for years, feeling confident that he knows precisely just “how evil” the People’s Republic of China really is. He has written books on the topic, and he has made videos. He cannot stop talking about the ‘evilness’ of the most populous country on Earth.

But does Mr. Navarro really know much about China? Or, are his constant attacks against Beijing just a job, and a well remunerated career?

How much damage is he really causing?

Yes, does it matter at all, these days? Or is just publicly hating China a good enough set of credentials in the West; sufficient to receive top jobs in the government, academia or the mass media?

One of my European acquaintances who lives and teaches at a university in Tokyo, once confessed to me (with a certain pride) that during those days when Westerners (including Western academia) used to be welcomed in China with open arms, he stayed for one year in Beijing and one day began his class by asking a question:

“Do you have any idea that one of your officials was a pedophile?”

Observing my shock, he explained:

“I just invented that stuff. The goal was to provoke and confuse my Chinese students.”

‘Whose goal?’ I wondered. Who was paying for such statements? That should be left to the imagination of readers.

On the other hand, whoever is paying Peter Navarro for his grotesque attacks against Beijing, is actually extremely well documented – the taxpayers of the United States of America.

Definitely, all very respectable and high positions. Especially for a dilettante.

After COVID-19 and the shockingly inept response to the spread of the disease in Europe and the United States began wrecking entire economies in the West and its neo-colonies, it became obvious that the Trump administration wad inclined to stop respecting the trade deal that he had signed in Beijing, in December 2019.

Instead of trying to deflate the crisis, instead of cooperation in the medical and economic fields, both Navarro and Bannon have been overtly pushing for confrontation.

“White House trade adviser Peter Navarro has been leading the effort, which would attempt to reduce reliance on China for vital drug ingredients and supplies like masks and gloves.

“The problem we’re facing is that any time we have a public health emergency, people wake up to the extreme foreign dependency that we have,” he said. “And after the crisis is over, they promptly go back to sleep.”

Steve Bannon, a former chief strategist in Trump’s White House who has long warned about the dangers posed by a rising China, said any goodwill built up as a result of reaching the initial trade deal is now moot. He blamed Beijing’s early actions — when it was accused of trying to cover up the crisis and resisting outside help — for “metastasizing” the pandemic.

“Now you can see they are on a propaganda offensive to blame this on the West, particularly the United States, and it’s going to lead to a further confrontation. There is a confrontation coming,” Bannon said.

He said a confrontation would likely involve an escalation “in the information war and the economic war.”

A spokesman for China’s Foreign Ministry, Lijian Zhao, shared articles, and raised questions about whether the U.S. was the origin of the illness. On March 12, Zhao tweeted, echoing the conclusions of many experts, all over the world:

“It might be US army who brought the epidemic to Wuhan. Be transparent! Make public your data! US owe us an explanation!”

“Navarro, known for his hawkish views on China, told CNBC earlier this week that he is bringing an Executive Order to Trump that would aim to reduce United States dependency on foreign manufacturers for medicine. About 72% of pharmaceutical ingredient manufacturers supplying the U.S. are located overseas, including 13% in China, according to October congressional testimony by Janet Woodcock, director of the Food and Drug Administration’s Center for Drug Evaluation and Research.”

The danger is that neo-cons such as President Donald Trump and Peter Navarro would not just try to produce essential drugs for the benefit of humanity, saving lives and improving health in all parts of our Planet, far from it! Earlier this month, Trump was trying to convince a large German drug company to relocate to the United States, find the cure for COVID-19, and start producing the medicine exclusively for the citizens of the U.S.A. Such attempts managed to disgust even the government of Trump’s close ally – Germany.

China, which defeated COVID-19 in a record time, is now helping countries all over the world, including Italy, Serbia and the Philippines, sending doctors, medical staff, and medical equipment, by air and by rail. China is showing its true compassionate, internationalist and rational nature, gaining friends in Asia, Europe and elsewhere.

That is, for the anti-Chinese warriors like Peter Navarro, nothing less than a total disaster, a nightmare. Their aggressive rhetoric is, therefore intensifying.

Peter Navarro is an openly anti-Chinese propagandist. His most ‘famous’, or should we say notorious, book, is called “Death by China: Confronting the Dragon – A Global Call to Action.” The book was made into a “documentary” film.

The most alarming fact is that an exceptionally bad writer and an old-fashioned, fundamentalist right-wing economist, has landed himself a post as a chief advisor in Donald Trump’s White House.

His ‘creative’ work is actually so bad, that even the most mainstream publications in the United States have nothing good to say about it.

Here are some reviews of “Death by China”, both the book and film:

“Important political argument at the core of Peter Navarro’s agitprop documentary was drowned out by xenophobic hysteria and exaggerations so rampant it becomes impossible to tell light from heat.”

Rotten Tomatoes gives the documentary a score of 33% based on reviews from 12 critics, which is simply embarrassing.

Again, Peter Navarro’s attempt to join the intellectual crowd would have long been forgotten (his book and film go back several years), if not for the fact that he is holding one of the most powerful positions in his country, advising the President, who often calls him “My Peter”, during the time of one of the greatest crises of the last hundred years.

Unbalanced and xenophobic, Mr. Navarro has many enemies even in the White House, but he also has some powerful allies, including the president himself.

On 26 December, 2019, The New York Times, decided to analyze Peter Navarro, and it’s conclusions ended up being very far from flattering:

“For three years, Mr. Navarro, 70, has been Mr. Trump’s trade warrior, pushing the President to rip up trade deals and rewrite them so they are more favorable to American workers. An academic with little previous government or business experience, Mr. Navarro has managed to exert enormous influence over United States trade policy by tapping into the President’s disdain for globalization and encouraging his view that China has been “robbing us blind.”

China specialists tend to view Mr. Navarro warily. He does not speak Mandarin and had visited the country only once before traveling there in 2018 as part of a White House delegation. Some scholars sneered in October when it emerged that Mr. Navarro had taken creative license to quote a fictitious source — Ron Vara — in several of his non-academic books. Even his own colleagues have chafed at his aggressive approach to China and have at times tried to block Mr. Navarro’s access to the president.”

They are spreading hate, misinformation and Western imperialist fundamentalist dogmas. And they are damn close to power. Some would say: they actually are the power.

China is trying to keep its calm. It is not seeking confrontation. But it is watching. And analyzing.

Mr. Navarro does not want peace. He does not want harmony. Just as almost all Western politicians throughout the centuries, he wants victory. Victory by all means. Victory, even if the entire Planet Earth goes to hell and burns. Victory and control over the Planet.

The era of the people like Peter Navarro should be, at least theoretically, over. But they are still here, they are dangerous; they are threatening the very survival of humanity.