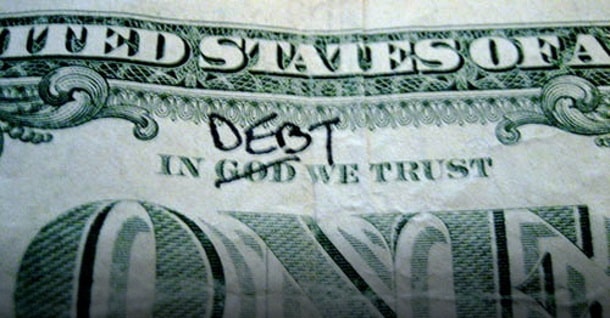 Even the LA Times declares that “Coronavirus crisis could trigger huge California deficits.”[2] Bloomberg declared last month: “What If This Is a Financial Crisis, But With People?”[3]

In an article entitled, “Is the Coronavirus Crash Worse Than the 2008 Financial Crisis?” The Times reports: “As COVID-19 Crashes the Economy, Workers and Business Owners Wonder If Anything Can Save Them From Financial Ruin.”[4] Foreign Policy says: “The last global economic crisis was a financial heart attack. This one might be a full-body seizure.”[5] Financial Times declares that “‘Bazookas’ cannot stop coronavirus becoming a financial crisis.”[6]

If Bazookas cannot do the job, then what can? Perhaps the masses need to wake up. Perhaps they need to realize that the oligarchic system and government manipulation are largely responsible for the looming financial disaster, which John W. Whitehead brought to bear.

John W. Whitehead: Let’s talk numbers, shall we? The national debt (the amount the federal government has borrowed over the years and must pay back) is $23 trillion and growing.

The amount this country owes is now greater than its gross national product (all the products and services produced in one year by labor and property supplied by the citizens). We’re paying more than $270 billion just in interest on that public debt annually. And the top two foreign countries who “own” our debt are China and Japan.

The national deficit (the difference between what the government spends and the revenue it takes in) is projected to surpass $1 trillion every year for the next 10 years. 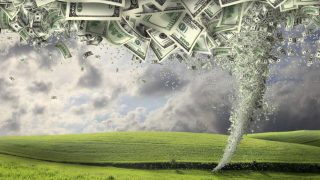 The United States spends more on foreign aid than any other nation ($50 billion in 2017 alone). More than 150 countries around the world receive U.S. taxpayer-funded assistance, with most of the funds going to the Middle East, Africa and Asia.

Meanwhile, almost 60% of Americans are so financially strapped that they don’t have even $500 in savings and nothing whatsoever put away for retirement, and yet they are being forced to pay for government programs that do little to enhance or advance their lives.

Folks, if you haven’t figured it out yet, we’re not living the American dream.

The U.S. government—and that includes the current administration—is spending money it doesn’t have on programs it can’t afford, and “we the taxpayers” are the ones who will pay for it.

As financial analyst Kristin Tate explains, “When the government has its debt bill come due, all of us will be on the hook.” It’s happened before: during the European debt crisis, Cypress seized private funds from its citizens’ bank accounts to cover its debts, with those who had been careful to save their pennies forced to relinquish between 40% to 60% of their assets.

Could it happen here? Could the government actually seize private funds for its own gain?

Look around you. It’s already happening.

In the eyes of the government, “we the people, the voters, the consumers, and the taxpayers” are little more than pocketbooks waiting to be picked.

Consider: The government can seize your home and your car (which you’ve bought and paid for) over nonpayment of taxes. Government agents can freeze and seize your bank accounts and other valuables if they merely “suspect” wrongdoing. And the IRS insists on getting the first cut of your salary to pay for government programs over which you have no say.

We have no real say in how the government runs, or how our taxpayer funds are used, but we’re being forced to pay through the nose, anyhow.

We have no real say, but that doesn’t prevent the government from fleecing us at every turn and forcing us to pay for endless wars that do more to fund the military industrial complex than protect us, pork barrel projects that produce little to nothing, and a police state that serves only to imprison us within its walls.

If you have no choice, no voice, and no real options when it comes to the government’s claims on your property and your money, you’re not free.

If Americans managed their personal finances the way the government mismanages the nation’s finances, we’d all be in debtors’ prison by now.

Still, the government remains unrepentant, unfazed and undeterred in its money grabs.

While we’re struggling to get by, and making tough decisions about how to spend what little money actually makes it into our pockets after the federal, state and local governments take their share (this doesn’t include the stealth taxes imposed through tolls, fines and other fiscal penalties), the police state is spending our hard-earned tax dollars to further entrench its powers and entrap its citizens.

For instance, American taxpayers have been forced to shell out more than $5.6 trillion since 9/11 for the military industrial complex’s costly, endless so-called “war on terrorism.”

That translates to roughly $23,000 per taxpayer to wage wars abroad, occupy foreign countries, provide financial aid to foreign allies, and fill the pockets of defense contractors and grease the hands of corrupt foreign dignitaries.

Mind you, that staggering $6 trillion is only a portion of what the Pentagon spends on America’s military empire.

That price tag keeps growing, too.

Yet it’s not just the government’s endless wars that are bleeding us dry.

We’re also being forced to shell out money for surveillance systems to track our movements, money to further militarize our already militarized police, money to allow the government to raid our homes and bank accounts, money to fund schools where our kids learn nothing about freedom and everything about how to comply, and on and on.

Are you getting the picture yet?

The government isn’t taking our money to make our lives better. Just take a look at the nation’s failing infrastructure, and you’ll see how little is being spent on programs that advance the common good.

We’re being robbed blind so the governmental elite can get richer.

This is nothing less than financial tyranny.

“We the people” have become the new, permanent underclass in America.

It’s tempting to say that there’s little we can do about it, except that’s not quite accurate.

There are a few things we can do (demand transparency, reject cronyism and graft, insist on fair pricing and honest accounting methods, call a halt to incentive-driven government programs that prioritize profits over people), but it will require that “we the people” stop playing politics and stand united against the politicians and corporate interests who have turned our government and economy into a pay-to-play exercise in fascism.

We’re all in the same boat, folks, and there’s only one real life preserver: that’s the Constitution and the Bill of Rights.

The Constitution starts with those three powerful words: “We the people.”

The message is this: there is power in our numbers.

This holds true whether you’re talking about health care, war spending, or the American police state.

About John W. Whitehead:  John is an attorney and author who has written, debated and practiced widely in the area of constitutional law and human rights. Whitehead’s concern for the persecuted and oppressed led him, in 1982, to establish The Rutherford Institute, nonprofit civil liberties, and human rights organization whose international headquarters are located in Charlottesville, Virginia.

Deeply committed to protecting the constitutional freedoms of every American and the integral human rights of all people, The Rutherford Institute has emerged as a prominent leader in the national dialogue on civil liberties and human rights and a formidable champion of the Constitution. Whitehead serves as the Institute’s president and spokesperson. Widely recognized as one of the nation’s most vocal and involved civil liberties attorneys, Whitehead’s approach to civil liberties issues has earned him numerous accolades and accomplishments, including the Hungarian Medal of Freedom and the 2010 Milner S. Ball Lifetime Achievement Award for “[his] decades of difficult and important work, as well as [his] impeccable integrity in defending civil liberties for all.”