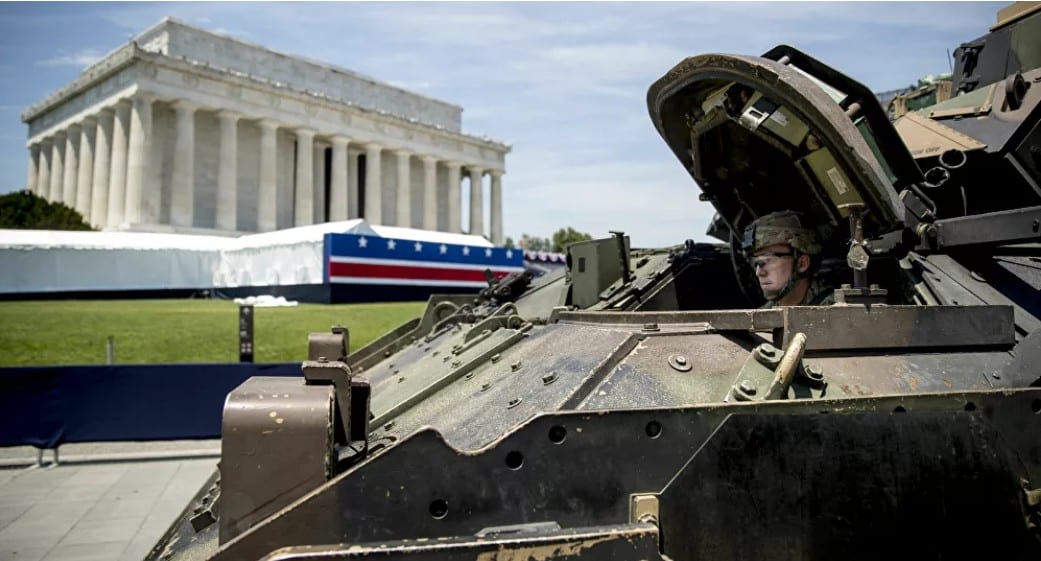 The second Trump uses force to vacate congress, the US will cease to exist as a republic. (He has made the first moves…)

Donald Trump and Mike Esper, an extremist political operative now controlling the US military, have secretly called up a first tranch of 10,000 National Guard for deployment in an unstated “emergency” predicted for Washington DC.

There is only one “emergency” there and that is Trump’s threat to disband congress and set up an official dictatorship using Proud Boy armed street gangs to stifle protests.

Trump will use the military if Congress refuses to disband so that Trump can appoint new judges that will enforce martial law.

Sputnik/Moscow: Department of Defence officials and civilian authorities have repeatedly played down fears that the US National Guard could be called in to enforce martial law in one or more jurisdictions of the United States in response to the coronavirus pandemic, dismissing claims to the contrary as “false” and akin to “conspiracy theories.”

The Pentagon quietly activated a 10,000 troop-strong task force to secure Washington, DC in case of an emergency over a month ago and never informed the public about it, Newsweek has reported, citing a senior military officer said to be engaged in the continuity of government planning, as well as three military sources familiar with United States Northern Command planning.

In an emergency, its duties are said to include evacuating government leaders from the capital, as well as “securing” the city and engaging in “homeland defense” against potential enemies both foreign and domestic, including protecting Washington, DC’s airspace and dealing with civil unrest. Its area of operations is said to include the District of Columbia and the surrounding areas in Maryland and Virginia.

According to Newsweek’s information, the task force was activated on March 16, and in addition to its heretofore secret mission has a public face similar to that of other military units called up in recent weeks to help fight the COVID-19 pandemic, including the provision of medical support, the operation of mobile health-check centers and supply delivery.

Quietly, however, part of the force is being held back from these COVID-19 response duties, and stationed at local military bases to ‘ensure readiness’ in the event that they are called upon. A senior retired NORTHCOM commander told the magazine that in an emergency, the units’ duties may include ‘unilateral action’, including efforts “as immediately required to save lives, prevent human suffering or mitigate great property damage.”

US media gave hints about the task force’s possible duties back in March, when Decatur, Illinois-based newspaper Herald & Review reported on the call up of Illinois National Guard forces being deployed at Fort Belvoir outside Washington, their mission ordinarily including aviation-related duties including fueling, repair work, piloting and logistics. Under the contingency, their tasks could include evacuating officials, lawmakers and members of the judiciary aboard 106th Aviation Regiment helicopters.

Other forces at the JTF-NCR’s disposal include a Marine Corps biological attack response unit on 24-hour alert, an army ‘Special Reaction Team’, consisting of the military police (including police officers to be seconded from local police in the event of an emergency), and an engineering unit trained for urban search and rescue.

Significantly, unlike in other deployments across the country, the Guard units assigned to Washington are under federal, not state jurisdiction, making their terms of service similar to those in force in the event of deployment overseas.

US officials did not comment on the veracity of Newsweek’s story except to say that the magazine was getting into “matters of national security.”

Previously, the US military and media have repeatedly downplayed any suggestions that the National Guard could be used to enforce martial law. Late last month, amid the activation of thousands of Guard troops, National Guard Bureau Chief Air Force Gen. Joe Lengyel told reporters that there was “no discussion…no plan to use the National Guard to do quarantine or ensure shelter-in-place operations.” Secretary of Defence Esper accused “external actors” of “injecting” these concerns “into the ecosystem,” similarly dismissing concerns.

At the moment, the United States is suffering from the highest reported incidence of COVID-19 in the world, with over 671,000 cases and 33,000+ deaths reported as of Friday.

Source:  Free Download MP3 of OUT OF CONTROL on SoundCloud.com