[ Editor’s Note: We have a political civil war breaking out between the Trump virus command team and the state governors, and then no holes barred battle with Trump trying to set Democratic states up to take the fall for bad Covid management so he does not get blamed for it on election day.

We have not seen the political blood letting that we could see with the disastrous pandemic in an election year. And if President “It will go away”, who also goes by the name “It’s a hoax” survives this, he might want to change his name to Houdini, in honor of the famous escape artist, who ironically died by going beyond his capabilities.

As Gordon has covered in his interviews, the personal financial hammer has not fallen yet on those living from paycheck to paycheck, but come May 1rst it will, and worse by June 1 when many are two months behind on their rent or mortgages, and some on one or even two car payments.

Any cash holdings people have will be saved for food and gas as folks scramble to move in with parents or anyone they can crash with. And then there is always camping.

Local and state budgets are going to see sales taxes revenues crash, and they are without the luxury of State Fed-type banks that can pony up a quick $billion or so to bridge the shortfall. That would trigger the cancellation of all state discretionary spending plans with a ripple effect of job losses in and out of government.

As we head into primary season we could see one of the ugliest election year battle in modern history. Trump’s highly leverage properties could collapse this summer over not even being able to pay the interest on his loans. Think “bankruptcies”.

Many observers think there is no line that he would not cross to save himself because if he loses the election his legal problems could multiply tenfold, to where he could be the first ex-President to go to jail.

The IMF is already predicting a worldwide recession so imports and export will be down. And if we seen subsequent reinfections going on for two years it will be worse. Our highly leveraged banking system might do a house of cards falling down number on us all… Jim W. Dean ] 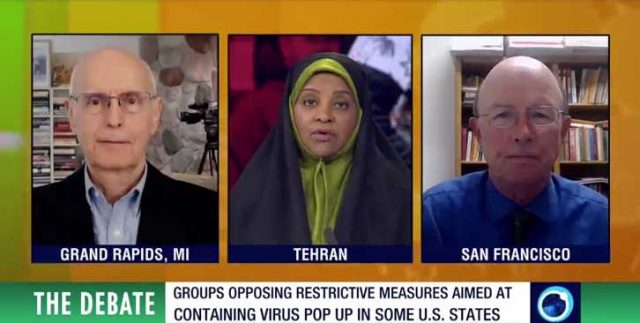 Click on  the video to get full screen or the play button to view in smaller screen. I come in at about 7 minutes.