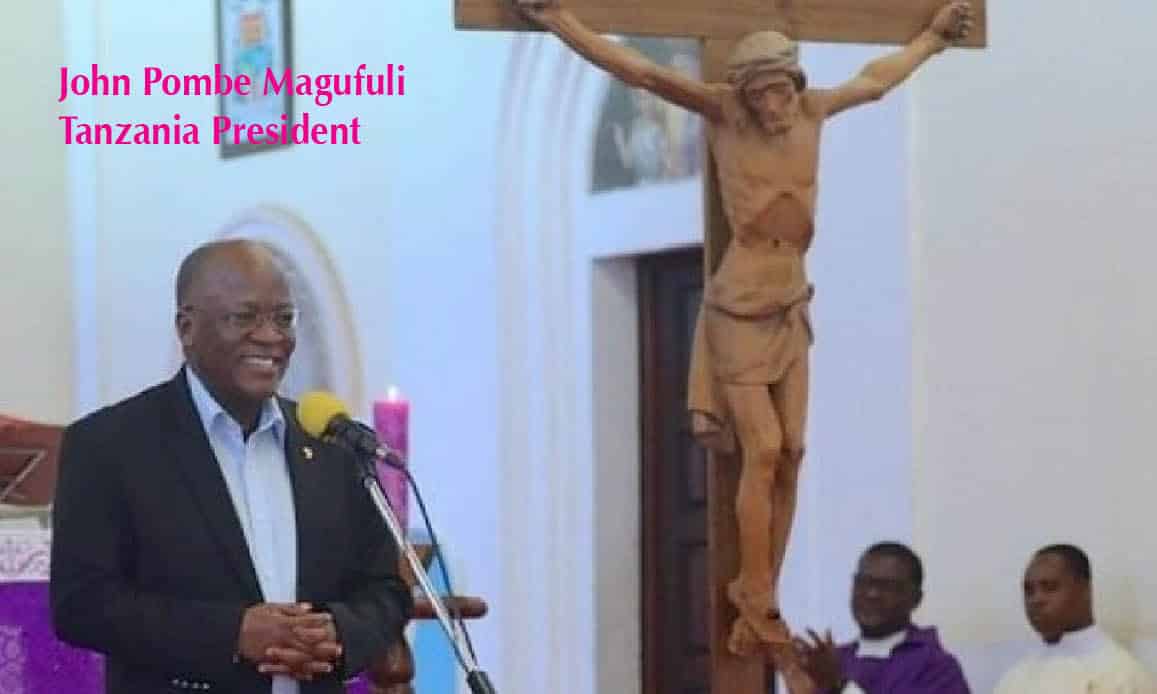 Are we really sure that Italy, Europe and the West guided by the fatous Masonic rituals of the arrogant Enlightenment can be considered the civilized world? When the CoronaVirus kills, without science having yet explained its true criterion and real origins, all that remains is to make the sign of the Cross as taught by the Catholic president of an African country: Tanzania.

Down below in the Black Continent, cyclically infested with epidemics often triggered by the experiments of the rich countries as seems to have happened also for Covid-19, the “lockdown” is soft and spiritual: no impediment to internal and external movements to the nation but closed schools and mandatory ban of social gatherings with the only extraordinary exception for the rites of religious cults.

Precisely to combat the pandemic that no scientist in the world has yet understood how to defeat, he trusts God with prayers.

Therefore Christian churches and mosques remain open, but with a careful respect for the distances between people as in Italy we do in supermarkets or Mail offices.

Only history will tell who has seen right! That story that gave reason to Abraham and Moses when they were immune to the wounds of Egypt and to the exterminated angel on the eve of the Exodus which became Easter, in San Michele Arcangelo in the Gargano, in Santa Rita in Cascia and in Sant’Antonio in Padua when they defeated plagues.

IN THE MEMORY OF JOHN PAUL II: the Bright Rosary’s Pope

It is the humanity’s story that made the truth of the apparitions of the Celestial Mother to Saint Bernadette in Lourdes triumph even in the palace of the liberal and progressive Napoleon III.

When his first-born child was healed by the miraculous waters of the Massabielle’s Grotto for the faith of his wife Eugenia the Freemason emperor, obtorto collo, reopened that cult, previously prohibited by the authorities for the imposition of blind modernist scientism also on faith more sparkling than prodigious and thaumaturgical Grace of God.

APPEAL FOR PRAYING BY TANZANIA’S PRESIDENT

«Tanzanian compatriots, because of the pandemic, I urge you to use these three days, from April 17 to April 19, to pray to God for His protection and healing»

So the President of Tanzania John Pombe Magufuli with a message on Twitter addressed his people invoking a triduum of prayer to ask for «the intercession of the Almighty against the new coronavirus».

This was reported by the Fides agency of the Pontifical Mission Societies in a note released by Dar es Salaam, the commercial capital in the city of Mwanza, on the banks of Lake Victoria, in northern Kilimanjaro, the most affected area of ​​the country where the Sars-2 pandemic balance has risen to 94 people infected and four deceased, since March 16 when the first infection occurred.

«Tanzania has not imposed any restrictions on movements or closed its borders, but has suspended social meetings and ordered the closure of educational institutions» writes Fides.

«Catholic Church has taken the appropriate measures to guarantee the hygiene and safety of the faithful such as maintaining social distances and eliminating the practices that put people in contact with each other”, however, the Pontifical organization has clearly highlighted.

The concept is simple and we expressed it in a previous article. If you believe in the Gospel of Jesus Christ Risen from the death “not of bread alone does man live” and, therefore, as you are entitled to do the shopping in a contingent way for the basic necessities – among which in Italy they have been included even newspapers, stamps and cigarettes by keeping newsstands and tobacconists open – you should have the full right to fulfill our spiritual needs too, including the “substantial” Sacrament of the Eucharist.

In countries founded by Freemasonry with the blood of revolutionaries and their victims, such as Italy, France, US, this has not been allowed also because the bishops themselves have not pondered in the least to devise an alternative plan such as the Holy Masses quoted in such a way similar to access to supermarkets. In the heart of Black Africa this was instead possible…

It is humanly understandable that this also happened because only 94 people were infected, but despite this, the Tanzanian president instead prohibited those gatherings that were still allowed in Italy, complete with disco parties and football games in the stadiums, when the epidemic had already infected thousands of people in Lombardy, Veneto and Piedmont killing dozens.

Here is a clear demonstration of healthy prudence, one of the cardinal virtues for Catholics, illuminated by true faith in the Almighty God of Abraham, Isaac, Israel and of the Messiah Jesus Christ.

It is not the first time that Africa has taught Europe how to fight an epidemic. At the beginning of the 20th century, the Christian missionary is a Swiss doctor, Adrien Sechehaye, who returned home, healed hundreds of people from tuberculosis thanks to the roots of South African Geranium. But then the synthetic vaccines came with their business and that natural remedy was put aside …

Since 1956, with the dried tuberose of that flower, the Pélargonium Sidoides, a German company has been producing an extremely effective completely herbal drug as a very powerful specific immune stimulator against diseases of the upper respiratory tract.

Despite the primary emeritus of the Niguarda hospital in Milan has confirmed its certain usefulness in the prevention of CoVid-19 and its hypothetical functionality also therapeutic in integration with other drugs, as suggested by the maximum pulmonologist of the Academy of Sciences of Russia to combine to antivirals an immuno-stimulator, no health facility has started an experiment in Italy or in the rest of the world. Although the medicine is certified and authorized by the European Medicines Agency (EMA).

It has killed more than 23,000 people in Italy, more than 40,000 in the United States and more than 160,000 worldwide despite ignorant and criminal conspiracy theorists claiming the existence of inflated data for what is not known as a brainy media conspiracy.

Indeed there is no better plot than that of building a concrete and serious threat, just like this lethal virus built in the laboratory also according to a Nobel Prize for Medicine, to raise the need for stricter rules to the detriment of democracy and civil and human rights.

The first patients died of respiratory failure from infectious pneumonia. Doctors have successfully tested antivirals such as chlorichin and anti-AIDS retrovirals, in the virus there are in fact HIV inserts that prove their manipulation.

Many patients healed, others died from “hysterical” hyperimmune lymphocyte reactions, similar to those of organ transplant rejection, which according to an official Chinese research and an informal Italian study, developed thanks to few autposias, 70 in Italy, would have caused blood clots in the veins that cause thrombosis and massive pulmonary embolisms.

In the face of this, and of the first rare cases of reactivation of the virus in some infected in Asia and Europe, science appears truly helpless hoping, much and perhaps too much, in vaccines, which, if the virus had many different genotypes (at least three are already established in China and by a study not yet published in the Czech Republic) would be ineffective.

While man therefore recognizes himself as “docile fiber of the universe” as the great Christian poet Giuseppe Ungaretti described it, all that remains is to follow the example of the Tanzanian president: invoke the Almighty and make the sign of the Cross. If it does not help us avoid contagion or heal us at least it will prepare our souls for the encounter with the Eternal.