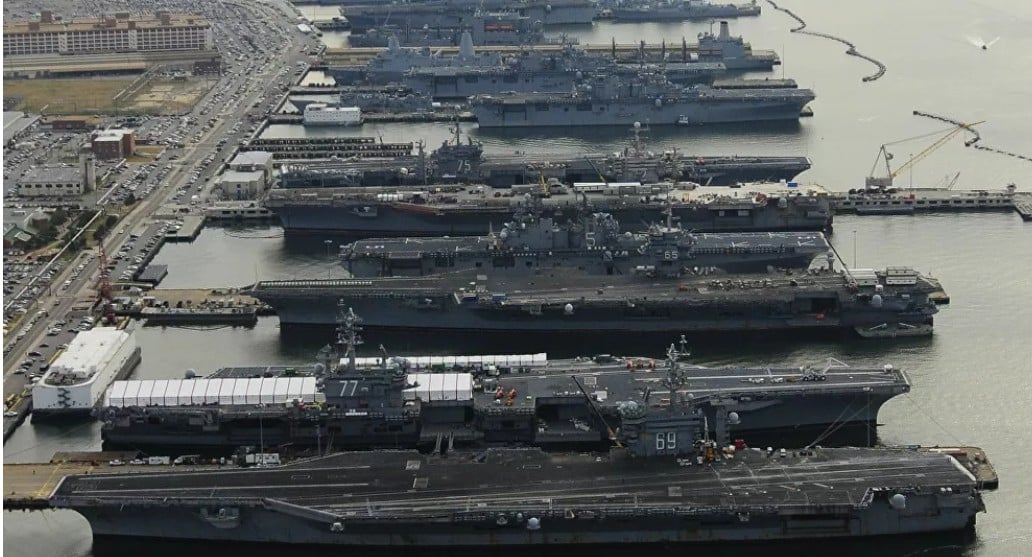 Sputnik/Moscow: An internal assessment from the Office of the US Secretary of Defense reportedly recommends the US Navy remove two aircraft carriers from its fleet and enlist dozens of additional lightly manned or unmanned ships.

Documents obtained by Defense News show that amid the Pentagon’s review of the US Navy’s force structure, Secretary of Defense Mark Esper’s office drew up an assessment which called for the service to reduce its aircraft carrier fleet from 11 to nine ships.

Furthermore, the study recommended a surface force of somewhere between 80 and 90 large combatants and 55 to 70 light combatants.

This contrasts sharply with past force projections, as last year the Navy bought two Ford-class aircraft carriers and withdrew the USS Harry Truman from an early retirement in an effort to reach its goal of a 355-ship force. Eminent US policy think tank The Heritage Foundation has called for still more, saying the US Navy needs 400 ships, including 13 aircraft carriers.

The US’ Ford-class and Nimitz-class supercarriers are by far the largest on the planet, weighing in at 100,000 tons and carrying 80 aircraft each.

Retired Navy Captain Jerry Hendrix told the outlet that deployment would have to be restructured if such a recommendation was carried out by the Navy.

“The deployment models we set – and we’re still keeping – were developed around 15 carriers, so that would all fall apart,” Hendrix said, speaking of the US’ carrier presence in the Middle East and Asia-Pacific.

“This would be reintroducing reality. A move like this would signal a new pattern for the Navy’s deployments that moves away from presence and moves towards surge and exercise as a model for carrier employment.”

Defense News highlighted that the assessment calls for the Navy to cease expanding its large surface combatant fleet, which is currently made up of around 90 cruisers and destroyers.

Esper communicated similar ideas in a previous interview with the outlet, saying that one of his visions for the future fleet would require the service to “much more aggressively” push for lightly manned ships.

“You can build them so they’re optionally manned, and then, depending on the scenario or the technology, at some point in time they can go unmanned,” he said.

Esper’s calls for “more smaller surface combatants” were criticized in March by Forbes defense contributor Craig Hooper, who explained that US Navy ships have historically been unable to operate in extreme weather conditions, and a greater reliance on lighter ships would put more lives at risk.

“Do [Esper] and other similarly minded policymakers understand that they may be arguing for a fleet that will be more effective fighting from a pier than out in the contested seas the future Navy is meant to secure?” he asked rhetorically, adding that “as China and Russia emerge, the Navy can no longer plan on operating in calm seas.”

“Today, as storms are becoming stronger and more frequent, the chances of a fight in higher, rougher seas will only increase,” Hooper argued.

News of this review comes while the Navy is conducting its own force structure assessment, which Defense News notes is predicted to echo the US Marine Corps’ previously stated desire to become more integrated with the Navy.