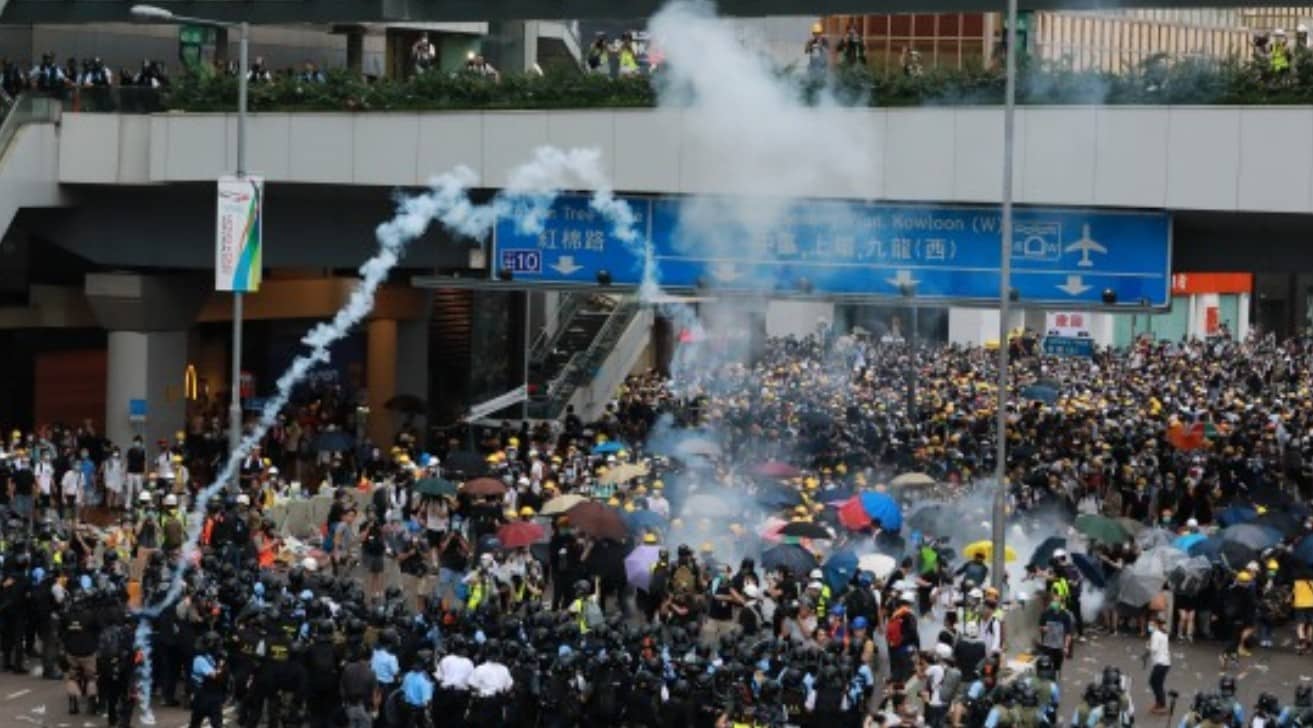 It has all been evolving in accordance with the script penned in Washington, London, and other Western capitals: pro-Western militants were first identified, then recruited. Riots were financed and supported; society, at least to some extent, destabilized. When the government could not just stand by and watch, when it finally acted, the Western media went into overdrive, attacking it ferociously for ‘violating rights’ and for ‘acting undemocratically’.

Nothing new, really. Tens, perhaps hundreds of governments have already been overthrown, all over the world, with the help of this ‘libretto’.

It is always done “in the name of freedom and democracy”, at least on paper. In reality, the burlesque and cheap tragi-comedy is performed for one and only reason: to keep power in the hands of Western governments, particularly Washington. It goes without saying that the West never really cared about the lives of non-Westerners. In virtually all parts of the world, including China, the lives of ‘The Others’ have been continuously sacrificed for the mercantile and other pragmatic interests of Western empires.

Hong Kong is no exception. And it takes great discipline not to see and understand it.

All that has been done in 2019 and 2020, is to harm the most populous and greatly successful socialist country – China. And the reason why China is, among a few other nations on Earth, singled out for smearing and continuous attacks, is because it has managed to develop and implement a much more prosperous political, economic and above all, social system, than the West. It puts its people first, and it is relentlessly searching for novel concepts which bring benefits to its population of 1.4 billion, and to the entire world.

The more successful China gets, the more endangered the Western regime becomes.

Washington, London and others, have already tried to infiltrate Mainland China with propaganda, with countless hostile NGOs and an entire army of ‘academics’ and journalists. But they have squarely and patently failed. Subversions and interference in China’s domestic affairs have been detected, confronted and finally stopped.

Hong Kong was identified as the “soft spot” or “Achilles Heel”.

The West has thrown tremendous resources into the territory, first in 2014 (during the so-called “Umbrella Revolution”), and later in 2019. On both occasions, it recruited mostly young people who have been frustrated with the fundamentalist capitalism, corruption and prohibitive cost of living. Highly professional Western propagandists made sure of totally twisting the reality, directing the wrath of some uninformed and unsatisfied people towards socialist Beijing, instead of at the reminiscences of the perverse regime which had been injected into Hong Kong by the British colonialists.

But even this approach and strategy, which has been so ‘successful’ in countless countries worldwide, has failed again.

With great determination, China (including Hong Kong), defeated COVID-19, all over its vast territory. While the West has clearly failed its people, and instead of fighting the virus, resorted to ugly propaganda and the cheapest imaginable disinformation tricks, snapping at China, Russia and other confident and socialist countries.

But the West has never really given up: Hong Kong, until now is still designated as the place to be destabilized.

This is how Reuters began its report, reprinted by The Globe and Mail, and many other publications, on 19 April, 2020:

“Suppressing Hong Kong’s democracy movement is a priority for China, even in the midst of the coronavirus crisis, a top pro-democracy leader said on Sunday, a day after police arrested him and 14 others in a surprise crackdown.

The United States and others criticized the arrest of the 15 on charges of organizing and participating in anti-government protests last year, the biggest crackdown on the pro-democracy movement since the outbreak of the protests almost a year ago.

“This is all happening while we are in midst of a pandemic,” pro-democracy activist Avery Ng told Reuters by telephone.”

This is how propaganda works. Instead of reporting the news first, or quoting official Chinese or Hong Kong sources (as would be the case if the arrests, including of such dissidents like Mr. Assange, took place in London or New York), Reuters opens its piece with some quote from a militant. Not only is this bad journalism, but it goes against all norms of ‘objective’ reporting.

But all gloves are obviously off, and reporters seem to be paid not just by the number of words they produce, but by how much they succeed in smearing China.

The logic of such articles is obviously pitiful. It can, and should be thrown back to its source, and read:

“Suppressing democracy all over the world is a priority for Washington, even in the midst of the coronavirus crises, which so far has infected 755, 533 people in the United States (by 19 April, 2020), while claiming 33,903 lives.”

On top of it, the proposed Hong Kong Extradition Bill (from 2019) has never clearly been explained to anybody by the Western mass media. The Bill was actually designed to protect the people of Hong Kong from the oligarchy, corruption and the safeguards erected exclusively for the elites, at the expense of the ordinary citizens. This point will be addressed by me, as well as documented, in detail, during and after my next visit to Hong Kong.

The 15 people who were recently arrested, actually broke the laws of Hong Kong, interfered in the due legislative process of their own territory, and helped to ignite violence which threw their amazing city onto its knees. All this was done under the British and UK colonialist flags, and under the banners of the U.S. and Germany. All this, while the National Anthem of the United States was blasted from the portable speakers of rioters. Public property was destroyed and people were injured, some killed. The Police which reacted in extremely restrained, mild manner, was shamelessly smeared by countless Western media outlets. I witnessed this violence, reported on it, and documented it.

As was noted above, the script has already damaged countless countries. But it is an old script. And it no longer inspires almost anyone, except those in the old and new imperialist countries of the West.