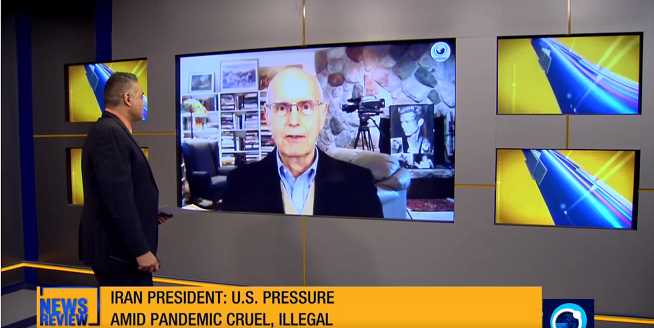 [ Editor’s Note: Trump and Pompeo are doubling down on keeping the Iran sanctions hard and fast and not worrying much about world blowback because the two headed monster of Covid-19 and a worldwide recession is not going to leave much energy for any major action being take to pressure the US in anyway.

Despite the US only controlling 16% of the IMF votes it seems that was enough to choke off Iran’s attempt at a $5 billion loan. Sure it was nice for the EU’s Mr. Borrell to condemn the US action, as did Britain, but words are cheaper than oil right now.

Iran may be hurt more depressed oil prices despite its success in maintaining it shadow oil sale marketing. With the US reeling from the coronavirus trillions of red ink spending and with state and big city governments running out of money everyone will be focused on saving their own skins I am afraid.

Iran’s advantage is the huge investment it has made in its resistance economy with the huge increase in replacing former imports with domestic production. That foresight, under on the brunt of US and EU sanctions before the JCPOA, will be its life preserver.

Could a US election upset change the landscape? Sure, domestically, but the Dems will be inheriting a mess way worse than what Obama inherited from the Bush gang looting.

Let us hope that no one will be stupid enough to start a big war now. The generals stopped him from doing it once due to the threat of triggering a world recession, but that card is already on the table… Jim W. Dean ]

Iran’s president has denounced the U-S sanctions against his country amid the coronavirus pandemic, describing the restriction as illegal and cruel.

Hassan Rouhani made the remarks during a phone call with Russian counterpart Vladimir Putin. The Iranian president also slammed Washington’s obstructionism and pressuring the International Monetary Fund to deny emergency loans to Tehran.

Rouhani hailed the Iran-Russia ties as strategic and called for more bilateral cooperation in the fight against the Covid-19 outbreak. Putin also criticized the US sanctions against Iran as a violation of human rights. He also highlighted the significance of expanding relations with Iran.