[ Editor’s Note: The Organization for the Prohibition of Chemical Weapons is coming under a growing assault from employees for rigging its reports. VT salutes these employees for standing up for the stated goals of their organization, which have been sadly compromised.

But they have a big problem, best portrayed by an old saying that will date me: A fish stinks from the head, meaning top management is stacking the deck in determining an investigation for an outside client.

As old VT readers know, we have a lot of old timer Cold War people here, who have long histories of having seen such “riggings” being done as just another day at the office. Why? It is because Intel organizations have a long history of penetrating such “independent” organizations so they can make rigged reports when needed. It is an old game.

What we have seen on the OCPW’s Syria chemical weapons reporting just reeks of this. But that is just one layer of the problem. If pressure built up to have an “independent” outside investigation of the OCPW’s work, and an Intel penetration into the org was responsible for said report rigging, what would you expect an involved Intel organization to do?

Those of you who chose “rig the investigation of the investigation” get a gold star and have futures as internet Intel analysts. I am not been mean to the Intel industry. It does a lot of important and valuable work, but not always.

There is, and always has been, a dark side. So now the big question we face is who would have jurisdiction to proceed with such an investigation of OCPW and could they ever be trusted?

Even if that actually was progressing, with all that has gone down on what many 30 and 40 year Intel professionals see as a paper thin veil for smearing Syria for using chemical weapons against its own people with no visible motive to do so, might it not be time to retire the OPCW and build a new organization from the start?… Jim W. Dean ] 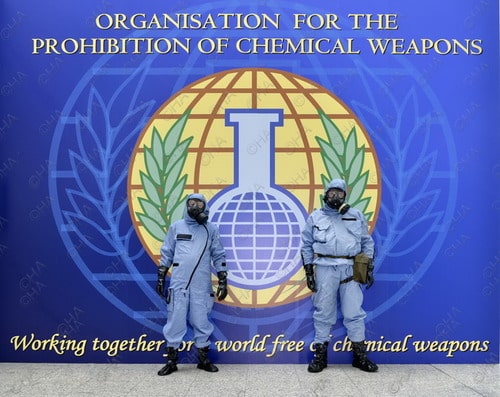 A group of current and former OPCW employees have explosively slammed the organization for producing what they say is yet another “procedurally and scientifically flawed” report into alleged chemical weapons attacks in Syria.
–

Writing at the Grayzone, the insiders denounced the “compromised” investigation into chemical incidents in the town of Ltamenah in March 2017. The probe was conducted by the watchdog’s newly formed Investigation and Identification Team (IIT), which claimed there are “reasonable grounds to believe” the Syrian government was responsible.

The IIT concluded that sarin and chlorine bombs were dropped by Syrian forces on Ltamenah in a series of attacks in March 2017, saying it was “unable to identify any other plausible explanation.” The Russian Foreign Ministry noted that the alleged evidence gathered by the team came mostly from anti-government groups eager to see a regime change and could only be described as “misinformation.”

The IIT report on Ltamenah was instantly amplified by Western media as fact, despite claims by high-level OPCW whistleblowers that the organization’s leadership had suppressed evidence during a previous probe into an alleged chemical attack in Douma in 2018.

The suppressed evidence, in that instance, had strongly suggested the incident may have been staged by jihadist rebel groups in order to frame the Syrian government and trigger a Western intervention. The OPCW, however, publicly offered a narrative which backed up Western claims of Syrian guilt, legitimizing US, British and French air strikes conducted in the immediate aftermath of the incident.

The fact that insiders are now also disputing the credibility of the Ltamenah report proves that “dissension within the OPCW ranks extends well beyond the Douma investigation,” the Grayzone said in its editor’s note.

The reports are so flawed and “politically motivated” that many OPCW professionals “no longer wish to be associated” with them, the group wrote, and many feel they should not be seen as representing the work of OPCW inspectors at all.

The Ltamenah report highlights the fact that “influential state parties” are misusing the OPCW to further their foreign policy objectives, and that the IIT was formed not to investigate the incidents but “simply to find the Syrian government guilty,” they said.

Indeed, the ITT merely “glossed over” some “glaring technical weaknesses” in reports from fact-finding missions to Ltamenah. Further damaging the report’s credibility is the fact that not one single member of the IIT conducted a field investigation, and “literally everything” in the case was provided by enemies of the Syrian government – some of whom are reportedly “well-known British military figureheads” who stood to gain by implicating the Syrian government, they said.

The OPCW insiders also took issue with the composition of the IIT, which surprisingly is made up of investigators “without any background or expertise in chemistry.” These so-called investigators are reliant on an “approved” list of “nameless, faceless” experts who represent Western intelligence agencies — a situation which suggests “devious and sinister” motives. This “one-sided array of experts” may be enough by itself to invalidate the conclusions of the IIT, they said.

While the IIT did lend some credence to the possibility of the attacks being staged, it quickly became clear that they did so only “with the express purpose of dismissing it,” they added.

In the article, the staff also briefly examined the question of motive, saying it “figures squarely within the realm of criminal investigation.” It is fair to question why the Syrian government would seemingly only use chemical weapons when they were “in control” of the conflict and not at their most desperate moments, they said.

Referring to a claim that chemical weapons, including sarin gas, were being stored at Shayrat Airbase in 2017, the group says the evidence ranks alongside intelligence reports leading up to the 2003 US invasion of Iraq in terms of its level of credibility.

The combination of the political bias, the compromised and flawed evidence, the lack of transparency and the singular reliance upon only one side of the story, leads to “serious doubts” about the IIT’s conclusions, the staff wrote.

“At the end of the day, we must be clear that this is little more than an expression of a one-sided opinion,” they wrote.

Finally, the OPCW insiders took aim at the “complicit” mainstream media for interpreting the shaky conclusions of the investigation as hard fact, ensuring the flawed report “is met with no scientific challenge whatsoever.”