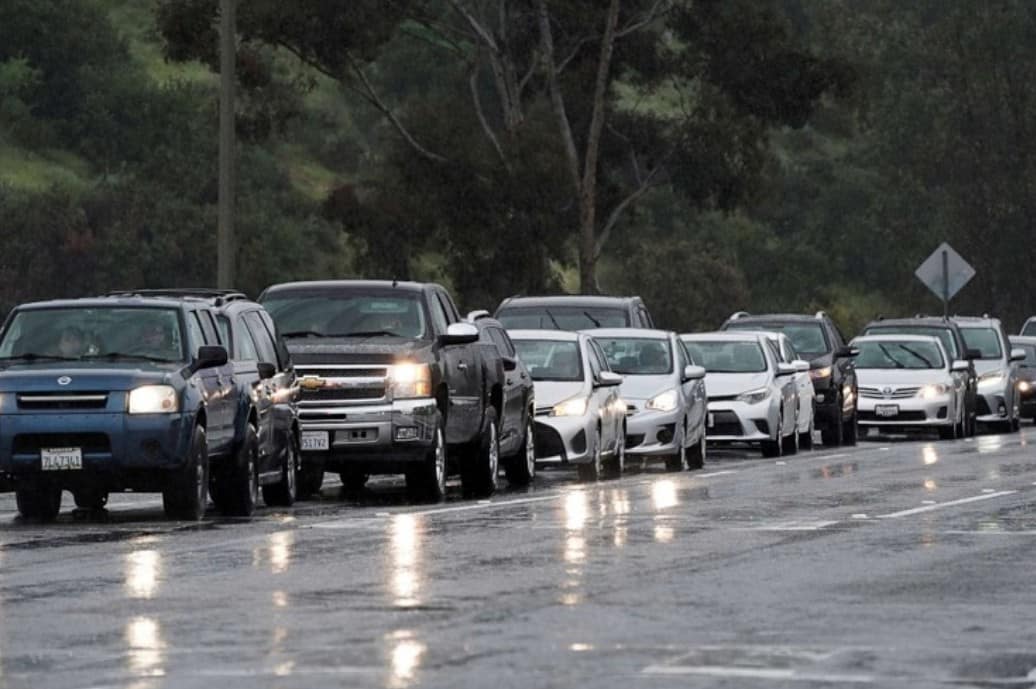 The report below is from The Guardian, a British paper. No such report has been made in any American paper though local television coverage has been extensive. No national coverage is allowed. America, you see, is under broad censorship. From The Guardian:

“Food banks across the US are under widespread and growing pressure as they cope with an increase in the ‘new needy’ amid the coronavirus pandemic.

Food banks face going millions of dollars over budget as they struggle to meet surging demand from those hit hard by mass layoffs caused by the coronavirus pandemic.

Across the US, not-for-profit groups are buying truckloads of increasingly expensive food to cope with the sharp increase in the “new needy” – and the dramatic decline in donations from supermarkets left empty by panic shoppers.

The pressures are widespread and growing, according to more than 20 food banks and pantries across 15 states consulted by the Guardian. For example, in Pennsylvania, food banks are spending an extra $1m a week and yet still turning hungry families away.

In Alabama, one pantry looks set to go $3.6m over budget by August as food purchases and running costs – electricity, cleaning materials, boxes and overtime – have tripled: “We’re applying for grants as fast as we can,” said Jenny Waltman from Grace Klein pantry in Birmingham.

“We have enough food for the next month,” warned Lisa Scales, president of Pittsburgh food bank where the money spent buying food has tripled. “With so many businesses shutting, we’re concerned community donations won’t sustain this level.”

Queues up to six miles long have become common at these pop-up collection points as far afield as San Antonio, Las Vegas, and Cleveland, where thousands of recently furloughed and unemployed people wait hours for grocery boxes.”

The scene is San Antonio, Texas. No, its not a gun show or football game, those 6000 cars are waiting in line for free food. Yes, the cars look new, How can 35 million people in a nation awash with cash, a nation with a massive and bloated military, a government that drops bails of cash to its terrorist and druglord allies around the world, how can that nation allow its people to starve?

But that’s exactly what is happening, across the country, food lines miles long with cars and trucks, but none of it is reported except on local television stations but nothing in the national media, a total backout.

What makes it worse is the “Pandemic Profiteers,” the friends of Jared Kushner and the Trump boys, huge bailouts, interest free loans, advance warnings on moves in oil and stocks and, worst of all, stockpiling medical equipment and creating artificial shortages to drive up prices.

With President Trump advising Americans to drink or inject poisonous disinfectants, his political allies, read “puppets,” are still pushing hydroxychloroquine as a “cure all” despite the fact it has doubled death rates where it has been used and is banned by every reputable medical organization in the world.

And all of this while 35 million Americans starve.

By the middle of April 2020, 26 million Americans had filed for unemployment compensation. However, in “red states,” it is routine for all new applications to be automatically rejected for a period of 4 to 6 weeks with most eventually turned down. Each state has its own laws and “red states” offer wide protections to employers allowing them to block unemployment compensation payments without cause, putting an overwhelming burden of proof on the unemployed.

Like many companies, they hire temporary workers permanently from “agencies” that shield them from responsibility for injuring workers or concerns about organized labor.

Then there is the $1200 that Trump promised Americans, money that would barely cover rent or a car repair, money that never showed up.

First Trump wanted his signature on the checks, though most were to be sent with wire transfers to bank accounts, now we find the agency tasked with sending out the pittance has no idea how to perform the task. It wasn’t going to be enough and, besides that, millions simply don’t qualify, among those America’s most needy.

In mid-March 2020 I drove to a small meat store in Muskegeon, Michigan, where I normally make some purchases but, to an extent, also do this for “sociological” reasons. The clientele is mostly African American and what is offered, serving the differentiated food preferences of that community, also serves my own. Most Americans eat bland and largely “chemicalized” foods.

In line, rather than seeing large shopping carts of meat, most were carrying small bundles of inexpensive cuts of meat or organ meats, not the delicacy here they represent in France.

When I reached the front of the line, carefully distanced as required, it was assumed that I was also there because this was the last of my remaining funds, as I was told by the cashier, “like everyone else shopping here.”

That was a month ago and no new money has reached anyone there or the tens of millions across the country. Instead, food banks, facilities that distribute donated food, in city after city in every state in the nation, is serving entire communities where the threat of starvation is now a reality, where children are going to be hungry.

All the while, churches are collecting their millions, and so many American religious leaders live like European royalty. Moreover, many of America’s churches are selling their prayers, delivered through a television or smart phone, with their Paypal accounts linked. Curing COVID by televised prayer can cost as little as $50 or as much as $5000, depending on which sect you belong to.

Of the worst of these, many are not only Trump supporters but include Trump’s “religious advisors.” There is no record of Donald Trump ever attending a church for anything other than one of his “weddings,” prior to seeking political office.

Since being placed in office, Trump has not only dismembered America’s capability to respond to pandemic threats but Americans have been, by the millions, stripped of their healthcare coverage. Cuts to Obamacare and massive cuts to government sponsored care as well have left up to 46 million without any coverage at all.

Rough guidelines for government assistance to deal with expenses from COVID 19, those things promised by Trump early on, have never been enacted. Funds to pay for testing and treatment have never been allocated, particularly now that the largely European owned oil giants need a trillion-dollar bailout by the US taxpayer, and of course they will get it.

All the while, money intended for food simply doesn’t exist and the healthcare that comes with citizenship in every other advanced nation, is now unavailable to tens of millions of Americans.

Yes, America may need PPE (Personal Protective Equipment). However, mostly, the United States needs packaged food that can be prepared by those now homeless or operating without water or any cooking capability due to disconnected public utilities.

Though some governmental organizations have promised to protect citizens from disconnects, many have done little or nothing, part of the “conservative agenda.”

Lots of blaming goes on in Washington but very little problem fixing. Drinking bleach, as suggested by Donald Trump, something unavailable across the country anyway, isn’t an answer for children not having milk.