‘Trump in China’s pocket’ bombshell by Politico turns out to be COMPLETELY wrong, in a predictable way

[ Editor’s Note: Politico advertises itself as independent media, which I would pose as both true and not true. I read it for political coverage, as they have paid staff that can be assigned a whole day or more to work on a story. Only well funded “independents” can generally do this.

However, when it gets into geopolitics, a more complicated area, and one where even the big main stream media platforms do not have the depth they once had, Politico comes up short, and in a blatant way.

I know because Politico came after VT once, a silly smear job story farmed out to a stringer young writer with the Politico magazine weekend edition. They hit us with being used as a Russian tool to profile US military people and veterans who could be conned into being trolls for the evil ex-Moscovites.

The elements were fed to the young reporter by the usual fake news seeding suspects, including a small country in the Mideast that was an early troll farm enthusiast and still is. He ran the story without calling us for a comment, something that a paid journalist is supposed to do to get a quote to use.

He did not bother, so we had fun tormenting him by doing TWO rebuttal stories on what a sloppy, lazy piece of journalism it was. We have never seen this guy on Politico or anywhere else since.

The Washington Post also jumped on a similar story fed to them via Google Ideas, but Gordon was able to educate them on how they had been conned and who we really were, and why our enemies were taking a shot at us using the Post as cover.

The end result of that is now VT has a cross publishing relationship with the Post, and they use us as a fake news sniffer to avoid getting sucked into a bad story by the sophisticated and well funded fake news hounds, many whose roots can be traced to Intel agencies attempting to use cutouts to hide their involvement.

Could Politico have called the Chinese Bank involved in this story to get their confirmation or denial? Sure, but it did not, because it did want to, I suspect feeling that China was a safe punching bag, which it is not.

Then there is the question of looking even deeper into the Chinese claim that they sold the loan, which is meaningless by itself. We would need to ask, “sold to whom, and was it sold at a discount”? If it was at a discount, can you say “money laundering”?

If China was suspicious, it could have called Deutsche Bank to ask them how they balanced (if they did), the Russian oligarchs’ deposits with what they were loaning to Trump, with there being virtually no chance of getting repaid.

He was toxic when the DB loans were made, not paying his bills, and a long record of bankruptcies. You can forget getting any documents from a Chinese bank on this. They will just laugh, as we are still chuckling over this Politico story… Jim W. Dean ] 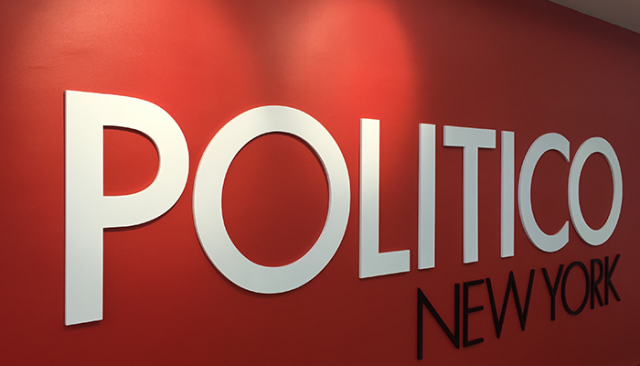 After Politico posted a sensational report claiming that US President Donald Trump owes millions to a Chinese bank, all of the information in it turned out to be wrong, leaving the outlet struggling to explain itself.
–

The original story, published Friday morning, reported that Trump’s real-estate partner received a $211 million loan from Bank of China for a New York property back in 2012 – and was eagerly picked up and trumpeted by legions of the US president’s critics.

Politico had to correct it almost right away, however, when the Bank of China issued a statement saying the loan had been sold off long ago.

In a telling admission, Politico noted that they had not actually reached out to the Bank of China for comment. But the story was not retracted; instead, the publication changed the title to past tense, and left in the claim that the Bank of China was still listed as a creditor on publicly filed paperwork by Wells Fargo, another bank involved in the deal.

On Monday, Wells Fargo contacted Politico – again, it was supposed to be the other way round – to clarify the paperwork cited was incorrect. Even though that demolished the sole pillar on which the revised story rested, Politico refused to officially retract it, offering instead an editor’s note published three minutes before midnight.

Our commitment at POLITICO is to journalism that gets its facts straight. We regret we fell short in this case.

Just like that, those who amplified the original story went strangely quiet and moved on to promoting something else critical of the president, leaving the more conservative pundits to marvel at Politico’s labored attempts to save face.

The non-retraction also prompted a harsh response from White House press secretary Kayleigh McEnany, who called Politico out for an “insatiable desire to rush out the door with a semi-baked story, paired with a salacious headline” rather than a commitment to facts.

What is particularly notable about Politico’s ‘Trump-China’ story is that the editor’s note suggests it was entirely based on documents, because they admitted never contacting either the Bank of China or Wells Fargo, while the White House and the Trump Organization “declined to comment on the record after being told what we intended to report.” That goes against basic principles of how journalism is done.

Worse, these types of “mistakes” seem to always happen in the same exact direction, to the point where it frankly smells of desperation. Politico at least had the decency to pretend to apologize. By contrast, CNN officially retracted only one of their fake stories, and other outlets simply shrugged and kept going.

The scrapyard of fake stories pushed by US mainstream media is littered with hundreds of “bombshells” accusing Trump of something nefarious over the past four years, from ‘Russiagate’ to ‘quid pro quo’ in Ukraine that eventually got him impeached in the House.

Perhaps the worst part for Politico is that their fake bombshell reads like a hit piece commissioned by the Democratic Party. Earlier this month, you see, the DNC war room outlined a blueprint for attacking Trump by saying he “rolled over” for China and took too long to react to the pandemic because he prioritized making a trade deal.

In a bit of actual journalism, that memo was made public by Axios – an outlet founded by Politico alums who struck out on their own after the 2016 election.