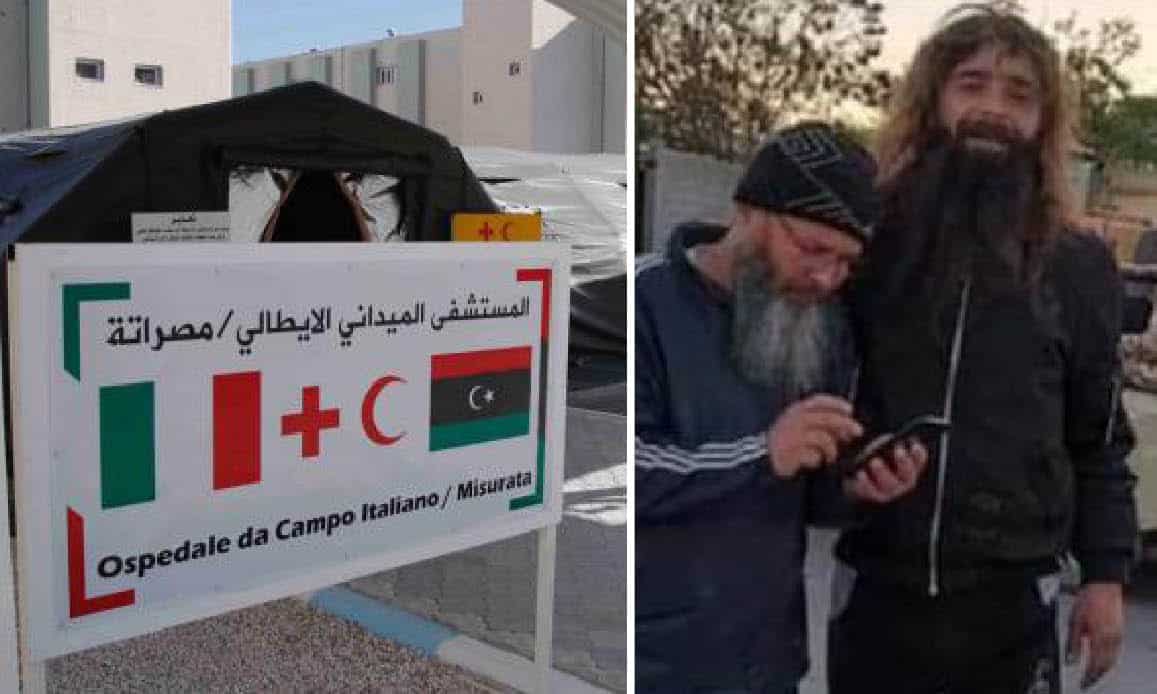 There is news we never want to read. And even less having to write. But the perversions of the Italian geopolitical system managed more by NATO and the CIA than by puppet governments of the Democratic Party (in command since 2012 with a small one-year break between 2018 and 2019) has given rise to disconcerting aberrations that deserve to be told even if they have still official confirmations and they hurt my heart as an Italian patriot.

«6 Syrian terrorist mercenaries for Hayat Tahrir AlSham (AlNusra = AlQeada) are now being treated in the Italian military base in Misrata after being injured in Tripoli». More than a twitter it’s the detonator of a bomb of controversy because he calls into question the field hospital managed by Bersaglieri (riflemen) of Italian Army.

The black-berets soldiers of the 7th Regiment of Altamura (Puglia) are there with their contingent of doctors and equipment from the “Role 2” hospital, a health facility already used in Afghanistan and Iraq, designed for high-capacity surgery on war wounds, and are supported by a C-27J tactical transport aircraft of the 46th Air Force of Pisa for an eventual emergency evacuation. It is equipped with operating rooms, analysis laboratory, plaster and radiology room, all connected to each other with inflatable tents.

They have been operating a few kilometers from the capital and the airport since September 2016, since Rome decided to support, with a humanitarian and non-offensive operation, the Tripoli National Agreement Government (GNA) of President Fayez Al Serray, never elected but recognized by the UN and the European Union to administer Tripolitania. This one has to seek an increasingly difficult compromise with General Khalifa Haftar, commander of the Libyan National Army (LNA) who controls Cyrenaica and its capital Benghazi with the support of the parallel government of Tobruk.

The presence of militants of radical Islam among the tents of the Italian military garrison was reported on Twitter by the same LNA and therefore the conditional is a must because its interest in discrediting GNA and its allies is evident. But so far the counterespionage of Marshal Haftar, in exile for many years in Virginia a few kilometers from the headquarters of the Central Intelligence Agency in Langley, has been very efficient and precise.

A few days ago, Ahmed Mismari, general and spokesman of the Libyan National Army, in a video released by newspaper Corriere della Sera, had openly called into question the 7th Bersaglieri Regiment present with 300 soldiers.

«Italy needs to withdraw its military hospital from Misrata as soon as possible. We have evidence that that structure no longer has anything humanitarian about it, but it is a valuable aid for the Misrata militias fighting against our army» he said. Now here’s the Tweet with the face of two jihadists who would have been treated in the health facility.

This really embarrassing news for Italy did not find attention in the world media focused on the gunfights that rage despite Ramadan and on the changing political scenario in which the general of Benghazi, after the fierce advance of the enemies, declared the interruption of every diplomatic dialogue and has proclaimed himself head of the whole country, in the reproach of the UN and Rome but also of his own allies of Russia and Egypt.

The military leader of Cyrenaica is preparing his own government, which should be called the Libyan Sovereignty Council, having gained control of over 90% of the Libyan territories, however only 60% of the population for the high density of the area of Tripoli in the hands of GNA who also regained the strategic cities of Sorman and Sabratha (close to the strategic oil platforms of Mellitah).

That’s happened with the help of Turkish mercenaries as part of the “Storm of Peace” mission that mimicked that “Peace Spring” with which Turkish President Recep Tayyp Erdogan invaded Syrian Rojava sowing blood and destruction even among Kurdish, Christian and Shiite civilians.

«For the advance towards Sabratha, the Syrian Islamist militias, formed by those Turkish-backed fighters taken in recent months from the Syrian province of Idlib and transferred to Tripoli, would have played a decisive role» writes InsideOver, the NATO-backed geopolitical appendix of italian newspaper Il Giornale, deliberately ignoring the danger of the jihadists.

In recent weeks, in fact, LNA has identified 229 Muslim extremists wanted for terrorism according to the UN list but sent from Ankara to Libya in support of Al Serray’s army besieged in the offensive launched by opponents of Cyrenaica last April. The Kurdish media Hawar News reported, particularly attentive to news regarding Turkish military operations.

Since on that list there are ex ISIS fighters as well as Al Qaeda and also the use of mercenaries in conflicts is prohibited by international conventions (although everyone uses them) the UN has launched an investigation, aimed at investigating also alleged illegal supplies of weapons left from Istanbul (trhough Ostend Belgian airport as revealed in preview by Gospa News) to arrive at Misrata airport, despite the embargo on Libya imposed for the civil war.

Since the start of the offensive, nearly 1,700 people have died, around 17,000 have been injured, while over 200,000 have been forced to flee their homes to become internally displaced people.

Libya: after jihadists Turkey sends weapons. Suspect flights from Belgium for Moldovian-Arab cargo. And Us one too

HTS is the faction of Sunni jihadists who control the last rebel stronghold in Idlib province in northern Syria. It was financed, armed and protected by Turkey also with the use of the 007 of the MIT of Ankara, known for having managed the movements of Foreign Fighters ISIS between Europe and Syria and vice versa, and only recently is it in crisis of relations with the troops of Erdogan because he signed the truce for Idlib with Russian President Vladimir Putin (and Iran) on 5 March.

The Hayat Tahir Al Sham group has incorporated the formation of the Al Nusra Front, Syrian rib of Al Qaeda, also to use that “camouflage” tactic that allows Islamic extremists to hide in a new faction not yet registered on the UN list of organizations terrorists and therefore to be able to obtain financial support from foreign powers for a certain period without violating international laws.

But even HTS was later declared an outlaw for terrorism with the United Nations code QDe.137 a few months after his seizure of power in Idlib in 2018. That is why it is useless to look for official confirmations of the reception of Hayat militants in the Bersaglieri hospital. of Misrata.

But if we believe that the news is reliable, it is above all for the international relations that have consolidated between Italy and Turkey, even following Erdogan’s decision to send the fierce and dangerous jihadist mercenaries to Libya, a country gravitating in the orbit of Rome for the platform of Eni hydrocarbon extraction which in 2018 started production of 10 new offshore wells in Bahr Essalam.

From these plants the gas is sent through the Sabratha platform to the Mellitah ground treatment plant where it is collected, compressed for the Libyan network . From there also starts the Green Stream gas pipeline (built in the agreement between Silvio Berlusconi and Muhammar Gaddafi) which sinks into the Mediterranean Sea and reaches up to Gela, in Sicily. (read more).

INSIDE OVER – GNA IN SABRATHA