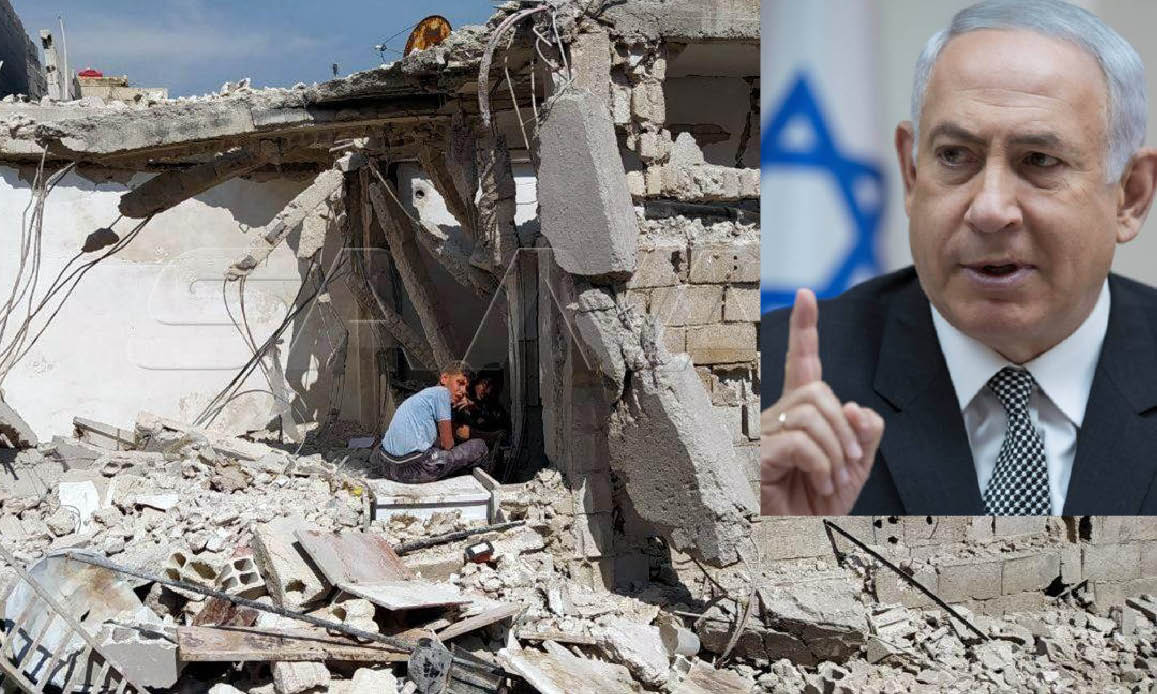 Share
Twitter
Pinterest
WhatsApp
Linkedin
ReddIt
Email
Print
Tumblr
Digg
Fabio Giuseppe Carlo Carisio, for VT Mediterranean
–
There are politicians who celebrate their appointment in a government with a banquet. Some who perhaps also have parties with fireworks. Benjamin Netanyahu, on the other hand, is similar to the historic Roman emperor Nero who celebrated his criminal exuberance in the Colosseum with the blood of the Christians.

The day on which Devil-Bibi was reconfirmed Prime Minister of Israel, despite his heavy and embarrassing prosecutions for corruption,, thanks to the political agreement between his party Likud and Kahol Lavan of rival Binjamin Gant’s , a storm of missiles fall down in Syria which in a few days killed more than the CoVid-19 pandemic.

So far, in fact, SARS-CoV-2 has only killed three Syrians while six of them have been killed by air strikes by the F-16s of the Heyl Ha’Avir, the Israeli Defense Forces air force. This happens when is surfaced a disturbing tie between Wuhan lab and Zionists too as describe in previous report.

But the most serious fact is that while in the first attack carried out on April 20 in the province of Homs against alleged military positions of the Quds forces of the Pasdaran of Iran, allies of Damascus in the victorious war with ISIS, three military men were killed. Before the dawn of April 27th, the Syrian Arab Army killed three civilians.

The number of victims of the two vile war actions was very limited only because the Russian-made air defense systems S-200 and S-300 supplied to Syria are very effective and therefore have shot down most of the missiles. But it is truly disconcerting that in the second attack, Prime Minister Netanyahu’s IDF targeted civilian homes on the outskirts of Damascus, as has only happened on a few other occasions.

There has never been a truce between the two countries since the war of 6 days in June 1967 when the Israeli Zionists seized the fertile Golan Heights. In the ecent years the Tel Aviv government has motivated its military actions, in most cases conducted by Israeli fighters with the extremely dangerous and vile tactic of hiding behind civilian flights in Lebanese airspace to protect themselves from the Syrian antiaircraft, due to the threat of the presence in the neighboring nation of the Hezbollah of Lebanon and the special departments of the Islamic Revolutionary Guards of Iran.

Both are in fact formations of Muslim countries of Shiite confession such as the Akawites of the Baatz party of Assad and therefore considered enemies by Israel, historically allied to the Islamic Sunnis of the Arabian Peninsula.

«While inspecting the damage caused by the attack in al-Hujaira, Quneitra Governor Humam Debiyat told journalists that the Israeli attack on civilian homes in the town claimed the lives of a husband and his wife, and injured three others, one of them a child» reported Syrian Araba News Agency.

«For his part, Damascus Countryside Governor Alaa Ibrahim said the Isreali attack damaged a house belonging to a displaced family from al-Quneitra city who were living in al-Hujaira, while a woman was martyred due to the attack in al-Adliya».

The barrage of missiles against the civilian quarters of Damascus therefore represents a terrible escalation in Netanyahu’s tactics which hopes to provoke Damascus’s reaction to trigger a more devastating conflict by relying on the greater military power also consisting of at least a hundred nuclear missile warheads.

This merciless Zionist’s policy is ongoing soiling the virtous name of Israel that descend from the blessed surname choosed by Jahwè for the merciful patriarch Jacob.

TURKEY’S WEAPONIZING OF WATER IN ROJAVA

«More than a million people in Kurdish-held areas of north-east Syria are being put at risk of a mass Coronavirus outbreak as Turkish-backed groups repeatedly cut off the water supply to a region in which health services are already severely damaged by almost a decade of war» reported Syrian Observatory for Human Rights (SOHR).

Turkish forces began occupying areas along its border with Syria after US forces withdrew from the region last October. This includes the Alouk water station located in the eastern countryside of the city of Ras al-Ain (Sere Kaniye) – a major source of water used by residents in multiple surrounding areas including Hasakah, Til Timir and both the al-Hol and al-Arishah displacement camps.

Human Rights Watch (HRW) has called on Turkish authorities to immediately do everything they can to resume supplying water through the Alouk water pumping station. «In the midst of a global pandemic that is overloading sophisticated governance and infrastructure systems, Turkish authorities have been cutting off the water supply to regions most under strain in Syria,” said Michael Page, deputy Middle East director at HRW.

Meanwhile, divisions are growing within jihadi groups in Syria. A week ago, over two dozen militants from Jaysh Maghawir al-Thawra (‘Revolutionary Commando Army’) who were previously deployed in the US-held At-Tanf area surrendered to the Syrian Arab Army. Later, on 20 April, unidentified groups reportedly attacked and destroyed a US military vehicle in Al-Hasakah governorate.

US TROOPS REINFORCEMENT AND ISIS’ TRANFER

On April 21, clashes broke out in the city of Qamishly between the Kurdish Asayish, a security force of the Syrian Democratic Forces, and the pro-government National Defense Forces. Local sources claim that NDF units tried to capture several Asayish positions in the city, but failed to do so. Both sides allegedly suffered no casualties.

The situation de-escalated rapidly after the Russian Military Police deployed in a nearby area intervened. After that started the reInforcement of the american troops in the area neraby the most imporant oil field seixe by Us Army for smuggling crude.

Instead, the local sources told SANA’s reporter that 6 vehicles belonging to the US occupation forces entered al-Shadadi on Monday morning, coming from the Syrian-Iraqi borders to the east, and after a few hours they left the city accompanied by choppers, heading east towards Iraq with a number of Daesh terrorists on board.

The situation in Syria remains very serious due to the existence of other confrontation fronts in the battered province of Idlib and in the Rojava of the Autonomous Administration of the Kurds occupied by the invasion of the Turkish army in the Peace Spring operation launched on 9 October 2019 by President Recep Tayyip Erdogan with the help of jihadist mercenaries from various factions in which ISIS leaders and Al Qaeda terrorist groups converged.

On April, 26 Helicopters belonging to Turkish army entered this evening Syrian territory, heading towards Turkish posts in southeast Idlib, to transport injured soldiers of Turkish troops following clashes with protesters, told SOHR. On the other hand, Turkish-backed factions and HTS are holding meetings to diffuse tension and break up the sit-in on M4 international highway.

Syrian Observatory activists have documented the killing of two members of Hayyaat Tahrir Al-Sham and the injury of three others, after Turkish drones targeted a car they were traveling in Al-Nayrab town in the eastern countryside of Idlib. This attack follows an offensive by HTS on Turkish posts in Al-Nayrab area as a respond to the killing of four protestors, including HTS members, participating in Al-Karama sit-in held on the M4 highway after Turkish forces opened fire on area.

The protest start weeks ago after the Astana’ agreement among Turkey, Russia and Iran for ceasefire in the Idlib’s province set on March, 5. Even if it has been violated several times by the terrorists who triggered the inevitable reactions of the Syrian army, the worldwide concerns of the pandemic have reduced Turkish actions in the area while they continued in Rojava and Afrin where the Erdogan’s Olive Branch operation is continuing to persecute Kurdish residents for blatant population replacement.

VETERANS TODAY – CLASHES BETWEEN KURDS AND GOVT’S FORCES IN ROJAVA