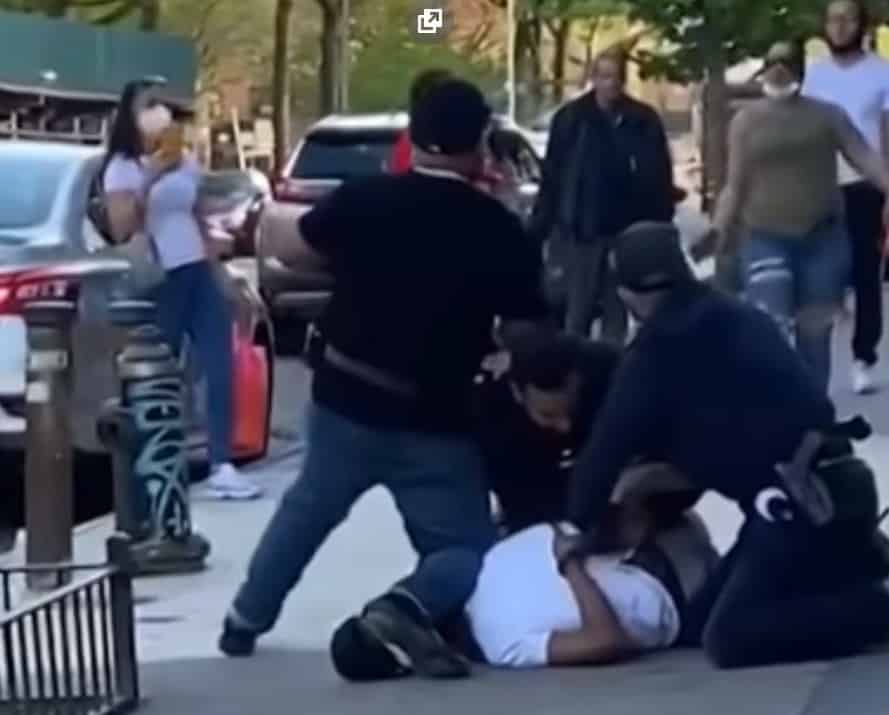 Note: One of our editors, we won’t say who, spent 2 very very long years as a cop back in the 1970s.  VT is generally supportive of police who are, by and large, better than average folks except in departments that are totally corrupt.

This wasn’t NYPD.  It seems to be now.

If you can’t wear a real uniform and keep your waist under 36 inches, you need to find another job, perhaps eating contests.

RT/Moscow: The run-in reportedly began when officers were trying to break up a gathering of people in the East Village on Saturday, which is prohibited under current lockdown measures in the city.

The video shows police tussling with a suspect while onlookers ask aloud what they did. A man then approaches the incident, and the officer tells him to keep his stance while brandishing his taser.

“What you flexing for? Don’t flex,” the officer warns the man, who is off camera. After the man appears to continue approaching, the officer brings him to the ground and proceeds to strike him in the face several times.

"What is equally disturbing is that some of these officers – who were ostensibly enforcing social distancing laws – were in violation of those same very laws themselves by not wearing protecting masks, endangering the lives of all New Yorkers around them."https://t.co/RqEXJUisqc

The officer then yells at the gathered grows, cursing, and saying, “That’s right!” This policeman, along with many of the others at the scene, are not wearing protective masks, something that has typically been required of law enforcement.

New York Cop on Desk Duty After Viral Video Shows Him Beating Up a Black Bystander Who Was Monitoring Another Man’s Arrest https://t.co/Lx4AV1S1aq pic.twitter.com/74QDeywKI8

“It started out as a social distancing enforcement,” Commissioner Dermot Shea on Sunday. “I am aware of the video that’s out there.”

The commissioner added that the incident is being investigated by the department’s Internal Affairs Bureau, and one of the officers has been placed on modified duty.

The witness who took the viral video, Daquan Owens, has disputed officers’ claims that people were not social distancing.

“They were social distancing,” Owens told The Gothamist about the incident on Sunday. “The girl was standing by the phone booth, the guy was sitting on a milk crate. When the cops pulled up she said he’s not doing anything. They grabbed her and started tussling with her. Then the guy on the milk crate got mad and started yelling at police.”

The second man who was tackled to the ground in the video was charged with assault of a police officer, menacing and resisting arrest.

Cops claim he took a “fighting stance” against the officer pointing a taser at him.

The other two arrests to come out of the incident included charges for disorderly conduct, pot possession, obstruction, and criminal possession of a weapon, as a 22-year-old woman taken into custody was reportedly carrying a stun gun on her person.