Dr. Fauci, spokesperson for the Trump Administration, cautioned that all of these estimates one sees about the number of deaths that are projected for Covid19, are based on models and a model is only as accurate as the assumptions that go into building it. In real life the public has panicked with the news of such harrowing deaths, but stop, take a breath, and look at the real numbers that have occurred:

To date there have seen 125,313 confirmed cases in the United States according to data from Johns Hopkins University. Of this number, more than 58,000 people have died from covid-19 in the US, meaning a rate of .0027% based on our population of 313 million people . . . that is less than 1%.

Dr. Fauci and other medical talking heads have stated they do not believe we have any idea of the number of people who have had or have Covid19 because there could be millions who are asymptomatic (showing no symptoms).    According to LitCovid (a subset of Pubmed), there is not a single reliable study to determine the number of asymptomatic cases today. It is likely we will only learn the true extent once population based antibody testing is undertaken.

Is this extraordinary? It would depend on what you call extraordinary. Compared to 609,000 cancer deaths and 859,000 heart disease deaths in 2017. That would reflect .0019% and .0027% each year. Covid19 just about equals the monthly rate of death for coronary disease. Unfortunately for those keeping score, it is impossible to keep up with the real numbers as they are being revised by the hour, up and down, depending on what suits the media.

A counter to the panic Americans were subjected to was the brilliant manner in which the Swedes handled the situation WITHOUT a complete meltdown. The country’s primary schools have remained open. Restaurants too, though congregating at the bar is discouraged and tables are set farther apart.

Those who can are encouraged to work from home, but nightclubs can operate so long as the manager ensures that people keep an arm’s length from one another. No more intimate smooching at the bar! 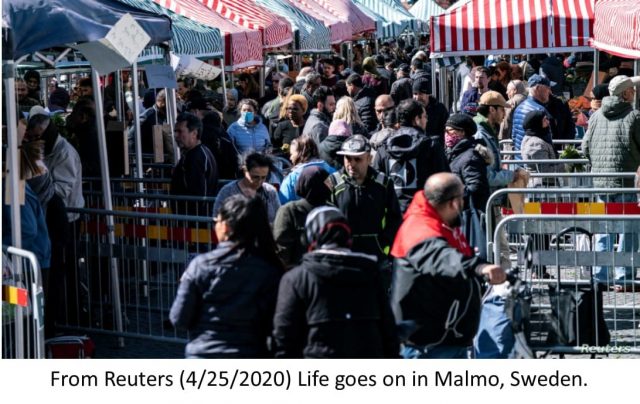 which calculates to a percentage of the population of .00024%, far better than many panic stricken countries including the U.S. Sweden did not go into complete economic lockdown, close all the schools, run for shelter, and forbid people to work. They did practice modest social distancing, but they haven’t brought their country to the brink of bankruptcy in the process, and they haven’t spent trillions of dollars on social giveaway programs.

When we look at the severity of Covid19 versus other diseases we as humans are exposed to, it should be kept in prospective and not be allowed to destroy life as we know it. Around the world, approximately 59 million people died last year, but  about 130 million newborns arrived to take their place. It is called the cycle of life.

In the U.S. the leading causes of death each year will shock most people to hear the facts, yet we don’t pay much attention to people killed by automobiles:

So if we factor Covid19 into the equation whatever the numbers turn out to be, is there any more reason to destroy our economy over this number than to outlawing automobiles? What is the number of fatal injuries we find from traffic accidents in across the U.S.? In 2019, an estimated 38,800 people lost their lives to car crashes, and 6,227 pedestrians were killed, but that isn’t the total . . . the number of people injured,  and the loss in property damage, yet we still have automobiles on the streets. Go figure!

If we listen to those in the media, the people of America are all about to be infected with

Covid19 and we are absolutely helpless. I suppose they want us to line up in orderly fashion and await the inevitable to happen when it becomes our turn to die at the hands of this wicked virus.

Every day if you are listening to the real news (not fake news) about what we are doing to turn the ship around, you can find out more about the drugs and treatments we have in our arsenal so you don’t lose your mind worrying about your inevitable judgment day just around the corner. The pharmaceutical industry is working overtime and is on the precipice of many new and exciting treatments, but the media doesn’t have a single good word for Big Pharma.

We have a proven winner with hydroxychloroquine and the similar drug chloroquine, that have been in use since first approved back in 1955 for the treatment of malaria, and has been working to control and treat rheumatoid arthritis, systemic lupus erythematosus, and Sjogren’s syndrome. Then there is compassionate-use approval for convalescent antibody plasma harvesting antibodies from patients who have recovered from Covid19.

Though limited in use, this was successful in treating the Spanish flu in 1918. And finally, the latest in the battle, an investigational antiviral drug called Remdesivir, by Gilead Sciences. With these protocols at our disposal America, you have nothing to fear but the fear the media is threatening you with.

Here’s a check list of facts you need to know:

We may be months if not longer bef

ore we will have a Covid19 vaccine. Herd immunity is now in play with our resistance to chicken pox. For the young and healthy who contract Covid19, that would be like getting the regular flu, and has it been shown that the survival rate is 99.9998% (if you look at those who have already been affected these past couple of months.). So if you are young and physically fit with no signs of comorbidity. Jump right in!

NOTE: If you are not an individual who has a weakened immune system (HIV, AIDS, or an auto-immune disease like MS, Lupus, or Fibromyalgia), a person over the age of 65 with other comorbidity health issues (hypertension the most common, but also COPD, diabetes, severely over weight, renal problems and ischemic heart disease), this concept makes the most sense.

Instead of focusing on truth, the media wants to focus on death and blame the President Trump for all those who have died as a result of Covid19.  The facts are in evidence . . . Every president has had a large number of American die over the term of their presidency. Yet the media wants to “selectively blame Trump” for Covid19. In fact, an average of 2,813,503 deaths occur under each president – the death rate is 863.8 deaths per 100,000 people. The good side of the numbers is that our life expectancy has risen to 78.6 years.

Tell me please when real journalists ever accused or condemned any president for deaths due to illnesses in the country until Trump came along. Obama was the president in 2018 when the flu season killed 68,000 Americans and hospitalized hundreds of thousand more. There wasn’t a peep from the media, and in fact most citizens were not even aware of these deaths. It looks to me that it is the media with their hype, made-up statistics, and “scientific models”, along with relentless (hour after hour) fearmongering, that is designed destroy the US economy and wipe-out the financial well-being of American citizens.

Every State and a bunch of their liberal residents have overreacted. For Abe Lincoln, he presided over the Civil War and nearly a million U.S.citizens died; and where was the criticism when Wilson presided over the deaths of nearly 120,000 who perished in WWI. Check ‘em all out. Roosevelt was at the helm during WWII and lost over 400,000. How about Truman during the Korean conflict 50,000+, or Johnson and Vietnam, another 58,000. The blame for these events were never focus directly on the president, and the loses were far worse than Covid19.

Letting the government close down our states, deprive Americans from their right to make a living, lock many of them up in their homes, and bully them to obey or go to jail, is right out of the tactics you’d find in the Old Soviet Union or what you’d expect from the Gestopo of Nazi Germany. We are letting our government commit a crime against our Constitutional rights.  If they were so right in these strong-arm tactics, why has Sweden been far more successful by using common sense and not stomping on the rights of their citizens?