Two years ago, I investigated an alleged laboratory accident at the Lugar Center, the Pentagon bio-laboratory in Georgia’s capital Tbilisi, which had resulted in the death of two Filipinos working in the laboratory. The death cases were hidden by the local authorities but I recorded on camera witnesses who testified about this tragic incident.

However, what then seemed to me to be a local issue, turned out to be part of a bigger story. The Lugar Center in Georgia is just one of the many Pentagon biolaboratories in 25 countries across the world. They are funded by the Defense Threat Reduction Agency (DTRA) under a $ 2.1 billion military program – Cooperative Biological Engagement Program (CBEP), and are located in former Soviet Union countries such as Georgia and Ukraine, the Middle East, South East Asia, and Africa. Much of their work is classified and includes projects on bio-agents and pathogens with pandemic potential.

The first known case of the use of biological weapons in our history was 250 years ago when the British gave blankets infected with smallpox to the indigenous people of North America.  As a result, a great many of them died and the British Empire gained control over the whole continent. Biological weapons are definitely much more effective than nuclear weapons.

The use of nuclear weapons leaves traces: an airplane taking off from an aerodrome and launching a rocket, a large number of participants in the preparation for an attack. Therefore, the perpetrators can be easily detected and held to account. Conversely, viruses can be used as weapons, though, they do not leave such immediate or discernible traces and it takes only a few crazy people who have decided to kill millions.

According to some scientific estimates, biological weapons can potentially destroy up to two-thirds of the global population in just a year. Our world is one big metropolis and even one virus engineered in a laboratory would be able to fulfill this goal in a short period of time, at a minimal cost and without leaving traces to the perpetrator.

Below, I am presenting information about what I have discovered while investigating Pentagon bio-laboratories abroad.

The Lugar Center, a $161 million Pentagon-funded bio-laboratory in Georgia’s capital Tbilisi, discovered coronaviruses in bats with presumably pandemic potential as early as 2014, documents have revealed.

Furthermore, in 2017 the Pentagon launched a $6.5 million program in cooperation with the Lugar Center involving genetic studies on coronaviruses in 5,000 bats collected in Georgia, Armenia, Azerbaijan, Turkey, and Jordan.

Coincidentally, the same Pentagon contractor tasked with the US DoD bat-research program – Eco Health Alliance, USA, also collected bats and isolated coronaviruses along with Chinese scientists at the Wuhan Institute of Virology. Eco Health Alliance received a $3.7 million grant from the US National Institute of Health (NIH) to collect and study coronaviruses in bats in China from 2014 to 2019.

The Lugar Center sparked controversy about possible dual-use research in 2018 when leaked documents revealed that US diplomats in Georgia were involved in trafficking of frozen human blood and pathogens for a secret military program.

In 2012 the US Center for Disease Control (CDC) collected and sampled 236 bats for research in Georgia in cooperation with the Lugar Center. The project was funded by the US DoD Defense Threat Reduction Agency (DTRA). Part of the samples were shipped to CDC (Atlanta), for screening for multiple pathogens, another part was stored at the Lugar Center for further studies.

In 2014 the US Center for Disease Control (CDC) launched a second project “Emerging zoonotic pathogens in Georgian bats” along with Georgian scientists at the Lugar Center. The project was funded by the International Science and Technology Center (ISTC).

ISTC, the organization that funded the bat project in Georgia in 2014, was established in 1992 as a non-proliferation international program, providing former biological and chemical weapons scientists with new opportunities for sustainable, peaceful employment.

Seven of the Georgian scientists involved in the ISTC bat research project in Georgia turn out to be former bioweapon scientists who had previously worked on the development of bioweapons, according to the ISTC project documents. Among them is Paata Imnadze, the deputy director of the Georgian National Center for Disease Control (NCDC) where the Lugar Center is located. 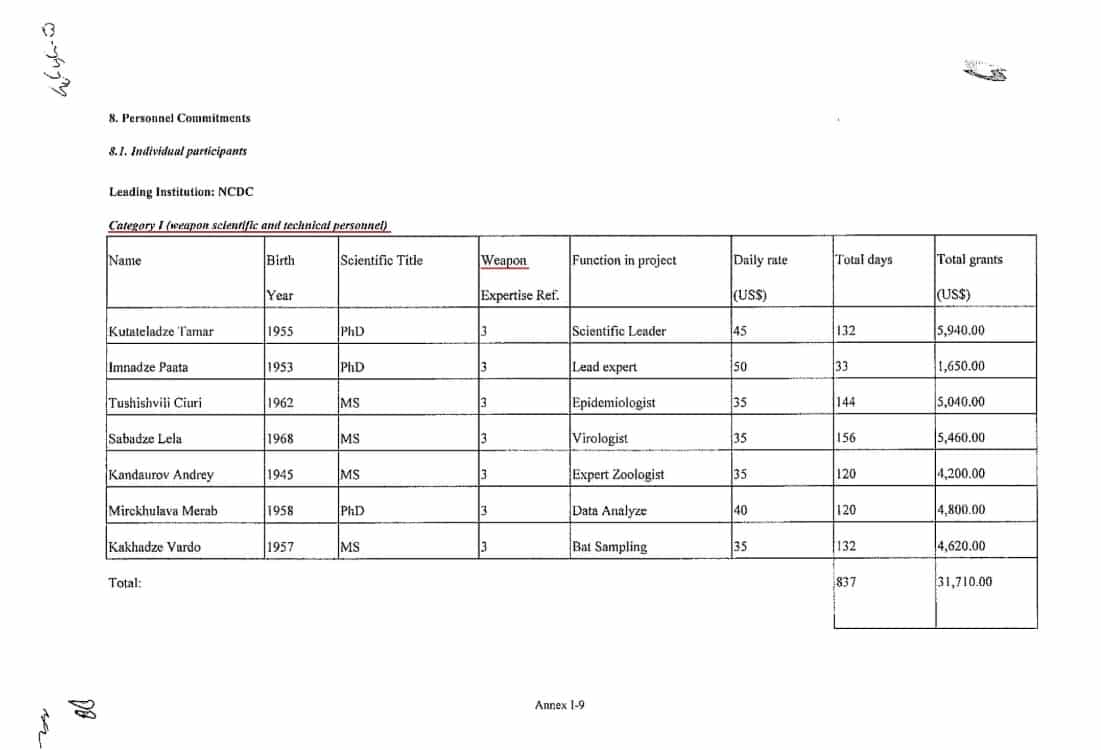 published on the University of Michigan’s website. He analyzed the data collected under the ISTC G-2101 project.

The Georgian National Center for Disease Control (NCDC) did mention briefly the ISTC Project G-2101 in its 2016 annual report.

The Lugar Center discovered coronaviruses, similar to the epidemic SARS and MERS coronaviruses, according to the ISTC project manager and Lugar Center virologist Lela Urushadze. These results were published by Urushadze in her dissertation submitted to the Ilia State University in 2018.

Both SARS and MERS CoV have pandemic potential and already caused global epidemics in 2003 and 2013 respectively.

“Based on our research, we can say that bats in Georgia are reservoirs for such bacterial and viral pathogens as Bartonella, Coronavirus, Leptospira, and Brucella, which are likely to have pandemic potential”, according to Lela Urushadze. She explains: “In total, we have captured 450 bats using nets and hand nets from eight different roosts. The experimental materials were collected twice in 2012 and 2014. They were transported in a field laboratory or BSL 3 Laboratory for further processing and research for the presence of the above-mentioned pathogens”.

In her dissertation Lela Urishadze thanks the Pentagon Defense Threat Reduction Agency (DTRA) for the material assistance. Lela Urushadze is a member of the DTRA-supported organization – BOHRN (Bat One Health research Network) which studies viruses in bats.

$6.5 million US military program on bats and coronaviruses

In 2017 the US Defense Threat Reduction Agency (DTRA) itself launched a $6.5 million project on bats and coronaviruses in Western Asia with the Lugar Center being the local laboratory for this genetic research. The duration of the program is 5 years and has been implemented by the non-profit US organization Eco Health Alliance. 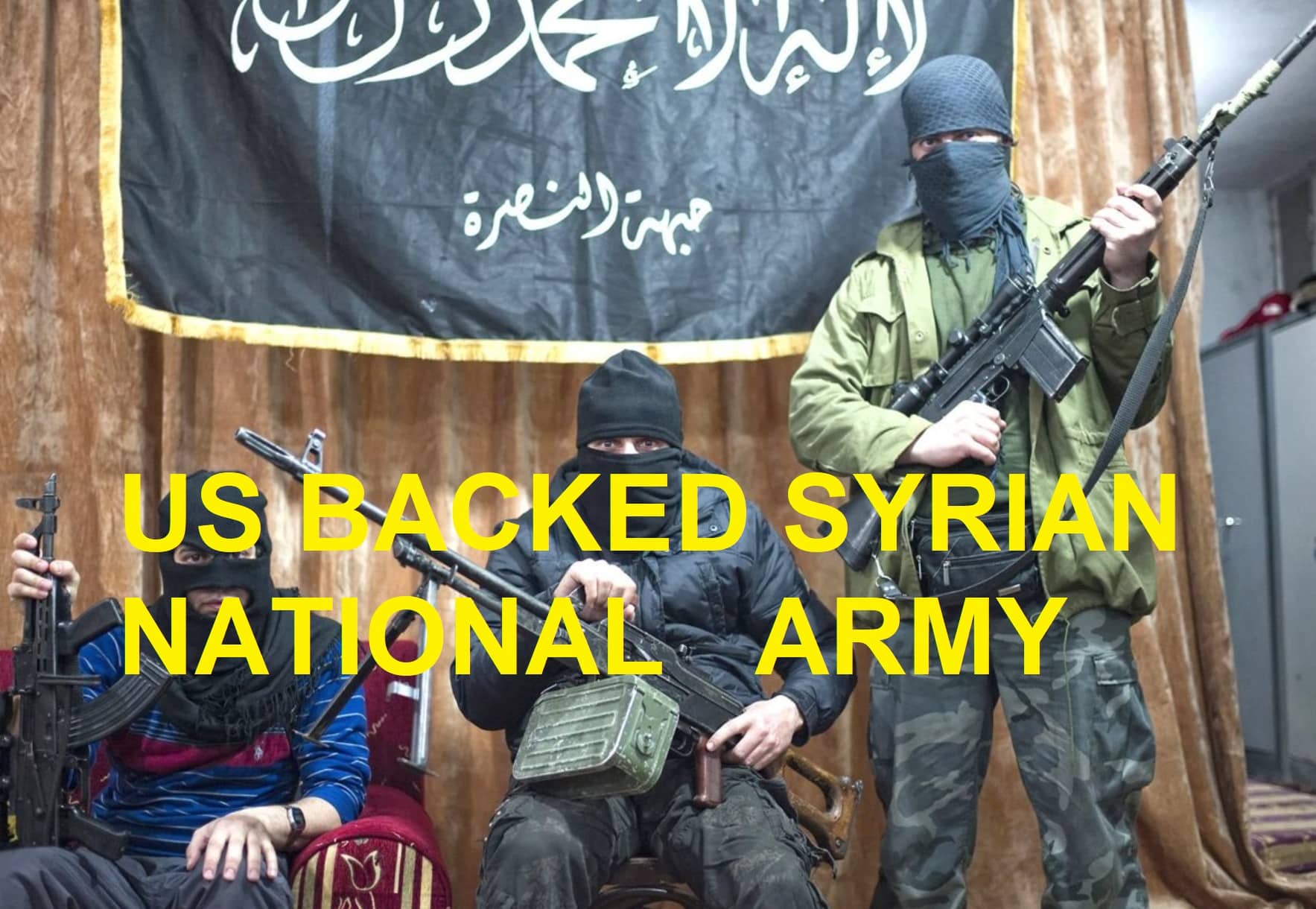 The project’s objectives are: 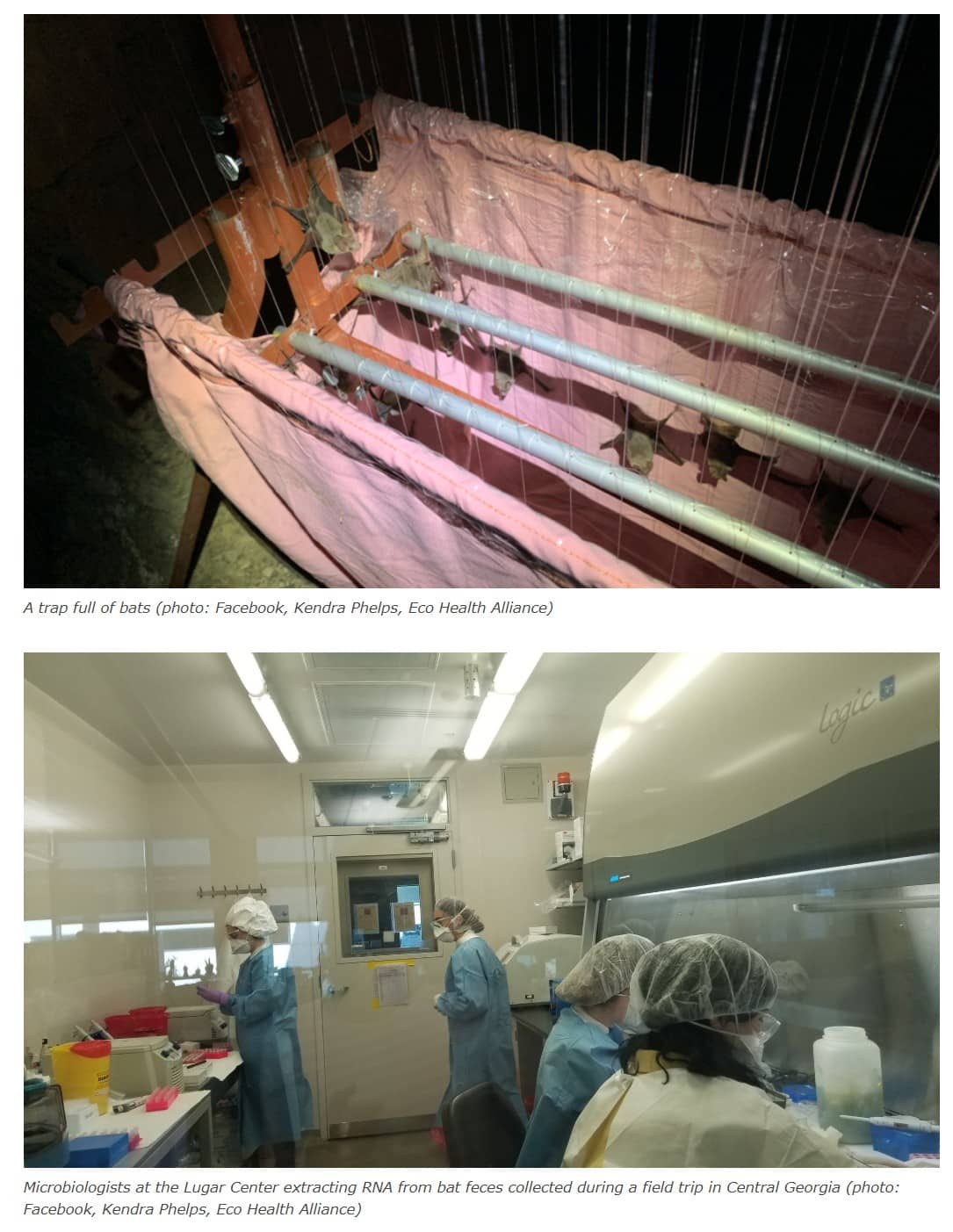 $3.7 million for coronavirus research in China

Eco Health Alliance was also awarded a $3.7 million grant from the US National Institute of Health (NIH) to collect bats and isolate coronaviruses in China. The duration of the project was 5 years (2014 – 2019) and was implemented at the Wuhan Institute of Virology – a BSL4 bio-laboratory located in Wuhan, Hubei province. This is the same province from where the current coronavirus pandemic is believed to have started in December 2019 before spreading around the world. 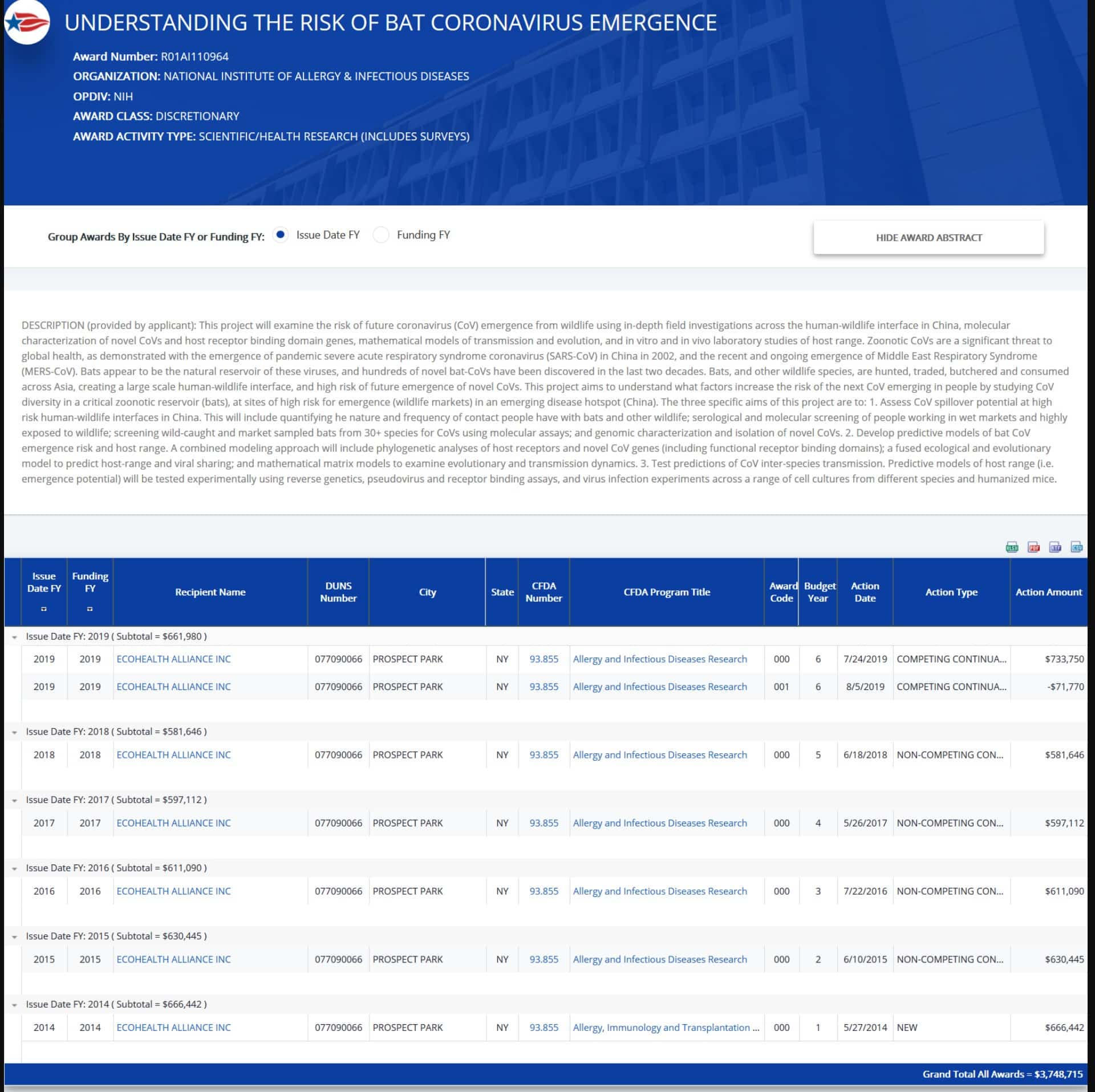 Peter Daszak, president of Eco Health Alliance, told Democracy Now that he had collected bat samples with Chinese colleagues but the Wuhan laboratory did not house the culture of bat viruses but rather their genetic sequencing. If the viruses were not stored in the Wuhan lab in China, then where were they transported and stored?

This is not the only US-funded project under which the Eco-Health Alliance collected bats and coronaviruses in China. The US scientists studied bats in Eastern Asia (mainly China) and Africa from 2009 to 2019 under the $200 million USAID Predict program whose primary objective was to exactly predict pandemics.

In 2016 Eco Health Alliance, US scientists and USAID launched The Global Virome Project. The ambitious project was estimated to cost at least $1.6 billion for 10 years. Its main objective is to identify emerging diseases lurking in the wild that could spread to humans and become pandemic. 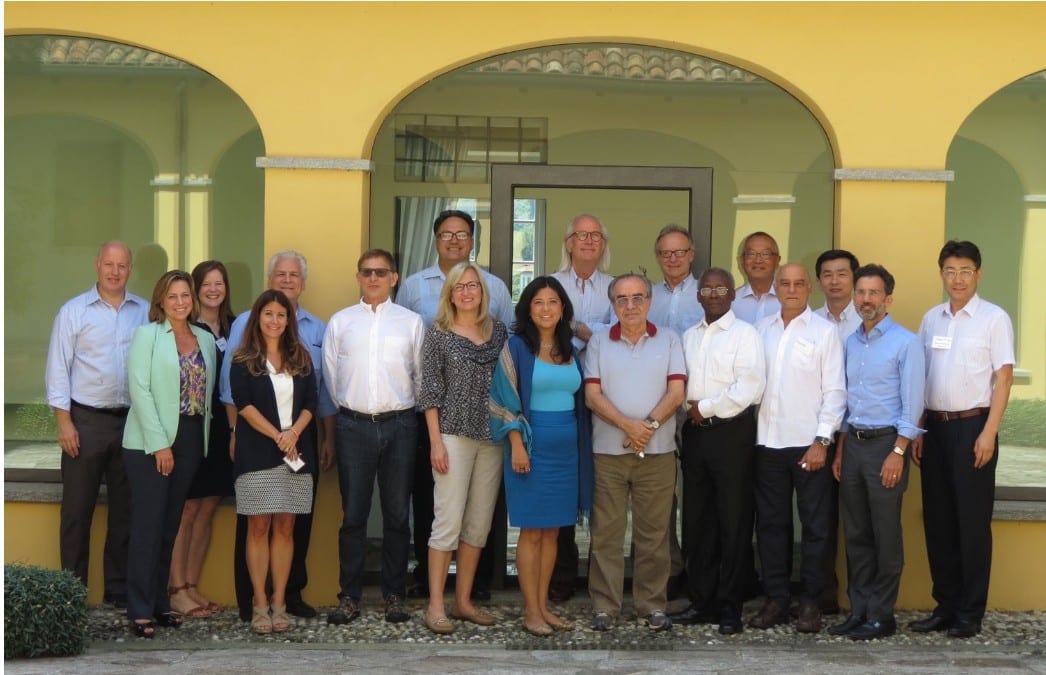 The Rockefeller Foundation has long been supporting such projects. The foundation has even provided the dangerous Zika Virus for sale online for research purposes.

Ironically, the project was presented at the Rockefeller Foundation’s Conference Center in Bellagio, Italy which 4 years later became the epicenter of the coronavirus pandemic in Europe.

P.S. Hundreds of thousands of people around the world have already died in the pandemic. All countries on all continents have been severely affected. If you have any information and would like to share it, please send a message to [email protected]. If you wish to provide information anonymously, I will not disclose your identity and you will be protected.

I would like to thank all volunteers who have already provided information. I would like also to thank all of you who have supported my work by donations. Thank you to @BMBPeeters who made the first donation. If you want to support Arms Watch, please go to the DONATION page or BECOME VOLUNTEER. Your help matters. This is the battle of our civilization. Thank you.