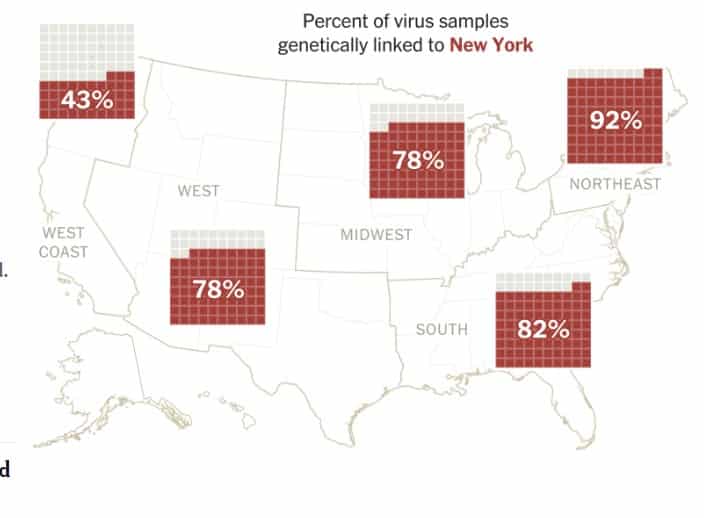 NY Times: New York City’s coronavirus outbreak grew so large by early March that the city became the primary source of new infections in the United States, new research reveals, as thousands of infected people traveled from the city and seeded outbreaks around the country.

The research indicates that a wave of infections swept from New York City through much of the country before the city began setting social distancing limits to stop the growth. That helped to fuel outbreaks in Louisiana, Texas, Arizona and as far away as the West Coast.

The findings are drawn from geneticists’ tracking signature mutations of the virus, travel histories of infected people and models of the outbreak by infectious disease experts.

“We now have enough data to feel pretty confident that New York was the primary gateway for the rest of the country,” said Nathan Grubaugh, an epidemiologist at the Yale School of Public Health.

The central role of New York’s outbreak shows that decisions made by state and federal officials — including waiting to impose distancing measures and to limit international flights — helped shape the trajectory of the outbreak and allowed it to grow in the rest of the country.  Read more at New York Times: