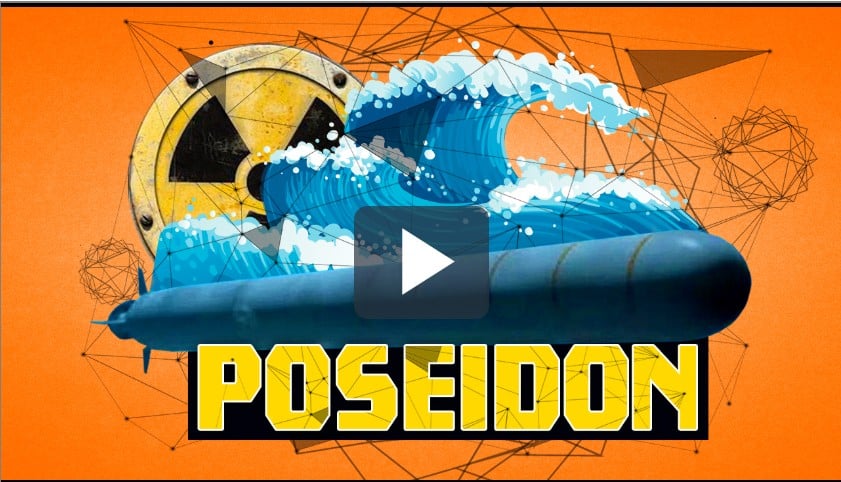 The Poseidon has been described as a “nuclear torpedo”, which is true in at least one sense, namely its propulsion. The Poseidon is, by all accounts, powered by a nuclear reactor which makes it a submersible equivalent of the Burevestnik nuclear-powered cruise missile, with an effectively global range. It is for all intents and purposes an unmanned miniature nuclear-powered submarine, with all the benefits that nuclear propulsion bestows on a submarine. The absence of a crew eliminates the need for heavy shielding and allows speeds considerably in excess of even the fastest submarines. Its top speed is estimated at between 60 and 100 knots, with the upper end of the scale being comfortably in excess of all torpedoes except for the short-ranged, supercavitating rocket-propelled Shkval. And while conventional torpedoes can develop high speeds only at the expense of range, due to the limited propellant or battery charge, nuclear propulsion means high speeds can be sustained for longer periods of time, subject only to the design’s mechanical limitations.

Virtually all descriptions of the Poseidon describe it as a nuclear delivery vehicle, for use primarily against coastal targets such as cities and naval bases, and possibly also against mobile naval high-value targets such as aircraft carrier battlegroups. However, this application is too limited in usefulness to warrant the development of a costly system like the Poseidon and specialized submarines designed to carry it. Even an extremely powerful thermonuclear warhead would have to be brought quite close to the target in order for the underwater explosion to cause significant damage to the coastal site. In many cases, the high-value target may be considerably inland, like Washington, D.C., or shielded by natural coastal features, like New York City. In order to strike them, the large and heavy Poseidon would have to maneuver at slow speed in shallow coastal waters where it would be vulnerable to underwater defenses that would be surely developed to cope with it.

This points to the likelihood of the nuclear delivery mission being one, and possibly not even the most important, of missions that it will be called upon to carry out. A Poseidon diagram shown on Russian TV pointedly referred to it as a “multi-purpose oceanic system”, which rather strongly suggests that it is not only, or even primarily, a nuclear delivery system. Cruise and ballistic missiles, even with conventional and nuclear payloads, are not referred to as “multi-purpose systems”, either.  Likewise the Burevestnik nuclear-powered cruise missile is also not referred to as a “multi-purpose” system.

In keeping with the general pattern of unmanned combat system development in Russia, which increasingly seeks to pair unmanned systems with manned ones to fully exploit the strengths and cover the weaknesses of each, it is entirely possible that Poseidon is intended to function not as an underwater Burevestnik, but rather as the equivalent of the stealthy Okhotnik combat drone developed as a “wingman” vehicle for the Su-57 fifth-generation fighter.

The peculiar qualities of deep ocean as a theater of war, particularly its opacity to sensors and limits on weapon speed mean that a combat underwater unmanned vehicle (UUV) would be of even greater use to a manned submarine than a combat crone accompanying a stealth fighter. But the support function would be essentially the same. The unmanned platform could enhance the lethality and survivability of the manned one by serving as a platform for sensors, weapons, and in extreme conditions even as a decoy.

The size of the Poseidon, specifically the 1.6m diameter and the length of 24m, suggest considerable internal volume suitable for a variety of configurable payloads, though it is unlikely these payloads could be changed once the Poseidon was loaded onto its carrier submarine. In addition to the already mentioned nuclear warheads, these payloads could include sensors, including sonar arrays, and even anti-submarine torpedoes. An early artist’s impression of the Poseidon actually depicted an underwater vehicle akin to a miniature submarine, complete with an array of torpedo tubes.

That the Poseidon has a broader range of intended capabilities than simply acting as a nuclear delivery vehicle is also suggested by the submarines being built to act as carriers for these torpedoes. There are currently two boats under construction that are intended for this role, the K-329 Belgorod, and the Khabarovsk.

The Belgorod, in particular, is interesting as a Poseidon launch platform because it is not a boat intended mainly for the “kinetic” combat role. Rather, this heavily modified Project 949A cruise missile submarine design is intended to act as a mother ship for the highly classified Losharik deep-diving research submarine, Shelf energo-capsules for the Harmoniya underwater sensor system network, and the Klavesin UUVs. While the diagrams crafted by the respected British undersea warfare analyst H I Sutton have the Belgorod carry Poseidons in forward-mounted horizontal torpedo tubes, the fact that the Belgorod is already extensively fitted for the external docking and internal recovery of manned and unmanned undersea vehicles could also mean that the Poseidon will be launched and recovered from launch bays. The original Project 949A design reserved extensive volume for a battery of 24 Granit anti-ship cruise missiles, whose launch tubes were arrayed on both sides of the hull in banks of 12. But if Sutton’s assessment of the Belgorod as being narrower than Project 949A, with a circular hull cross-section, then the Poseidon could still be carried in payload bays from which it could swim out and be recovered into.

Sutton’s analysis of photographs from the launch of the Belgorod led him to believe the boat is fitted with thrusters for precise undersea maneuvers, which would be required if the boat is to recover undersea vehicles. However, even if the Poseidon is carried in launch tubes and is not recoverable by the carrier submarine, the choice of Belgorod, a dedicated special-missions submarine, would be odd if Poseidon were intended only as a nuclear delivery vehicle.

Even less is known of the Khabarovsk, which is a purpose-designed boat whose main weapon system is supposed to be the Poseidon. Again, Sutton assumes that Poseidon torpedoes would be carried in torpedo tubes in the front of the hull, but the size of the Khabarovsk, a boat of estimated 10,000 ton displacement and 120m length, or only 40m shorter than the Borei SSBN, means there is ample volume for a swim-out launch and recovery bay. It is not yet clear what place Khabarovsk occupies in the Russian vision of undersea warfare. Perhaps it is intended as a mothership for an array of Poseidons with various payloads, to support operations of other submarines, including as escorts for ballistic missile submarines. It is also possible it is a prototype of a future class of attack submarines that will carry one or more Poseidons with conventional weapon and sensor payloads as a standard fit.

Being a world leader in nuclear technology, it is not surprising to see Russia leverage this advantage by creating novel aerial and naval platforms such as the Burevestnik and Poseidon. The coming years will no doubt provide additional information on their actual capabilities. It is already evident that Russia is not lagging behind in the development of novel applications for unmanned platforms.