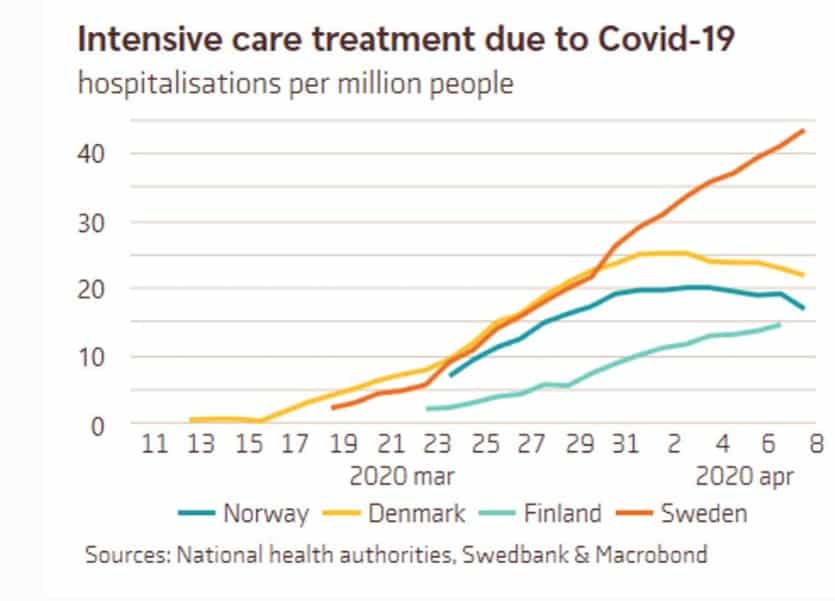 Note: Real life stats expose this RT article (RT is now in love with the Zio-Right) as crapola.  The graph above is the real one and until we see something other than soaring disaster, we write Sweden off as a Trumpish failure and those defending Sweden as total liars.

Check through the media and see who is touting Sweden as a success, even now as they are spiraling into disaster?  Remember your results and learn.

RT/Moscow: Sweden has recorded more than 3,000 coronavirus deaths, with the elderly bearing the brunt of the pandemic. But the Scandinavian nation has so far avoided the apocalyptic predictions made by its critics.

The country’s Public Health Agency has registered 99 new Covid-19 fatalities, bringing the death toll to 3,040. Sweden currently has 24,623 confirmed cases of the virus. It has found itself at the forefront of a heated debate over the effectiveness and necessity of lockdowns. The Swedish government decided against shutting down schools and businesses, opting instead for a holistic approach that focuses more on protecting vulnerable groups. While citizens have been urged to abide by social distancing measures, Swedish authorities have not enforced these measures with fines and threats of arrest seen in other countries.

Anders Tegnell, Sweden’s state epidemiologist, has admitted that his country has struggled to shield the elderly from the disease. According to the official tally, people aged 80 or older make up around two-thirds of Sweden’s deaths. Many of these deaths have occurred in nursing homes – a tragic trend seen across much of Europe.

ALSO ON RT.COMAt least 11 percent of Swedes may have contracted Covid-19, antibody study suggestsCritics of Sweden’s approach to the pandemic have pointed out that the country has a much higher death toll than its Scandinavian neighbors. However, in deaths per million people, Sweden is surpassed by a number of countries with strict lockdowns, including Belgium, Italy, France and the United Kingdom.

Notably, models which prophesized tens of thousands of deaths in Sweden have been all but discredited. A highly controversial model put forward by Imperial College London (ICL) suggested that by refusing to lock down, Sweden would pass 40,000 deaths shortly after May 1, and continue to rise to nearly 100,000 deaths by June.