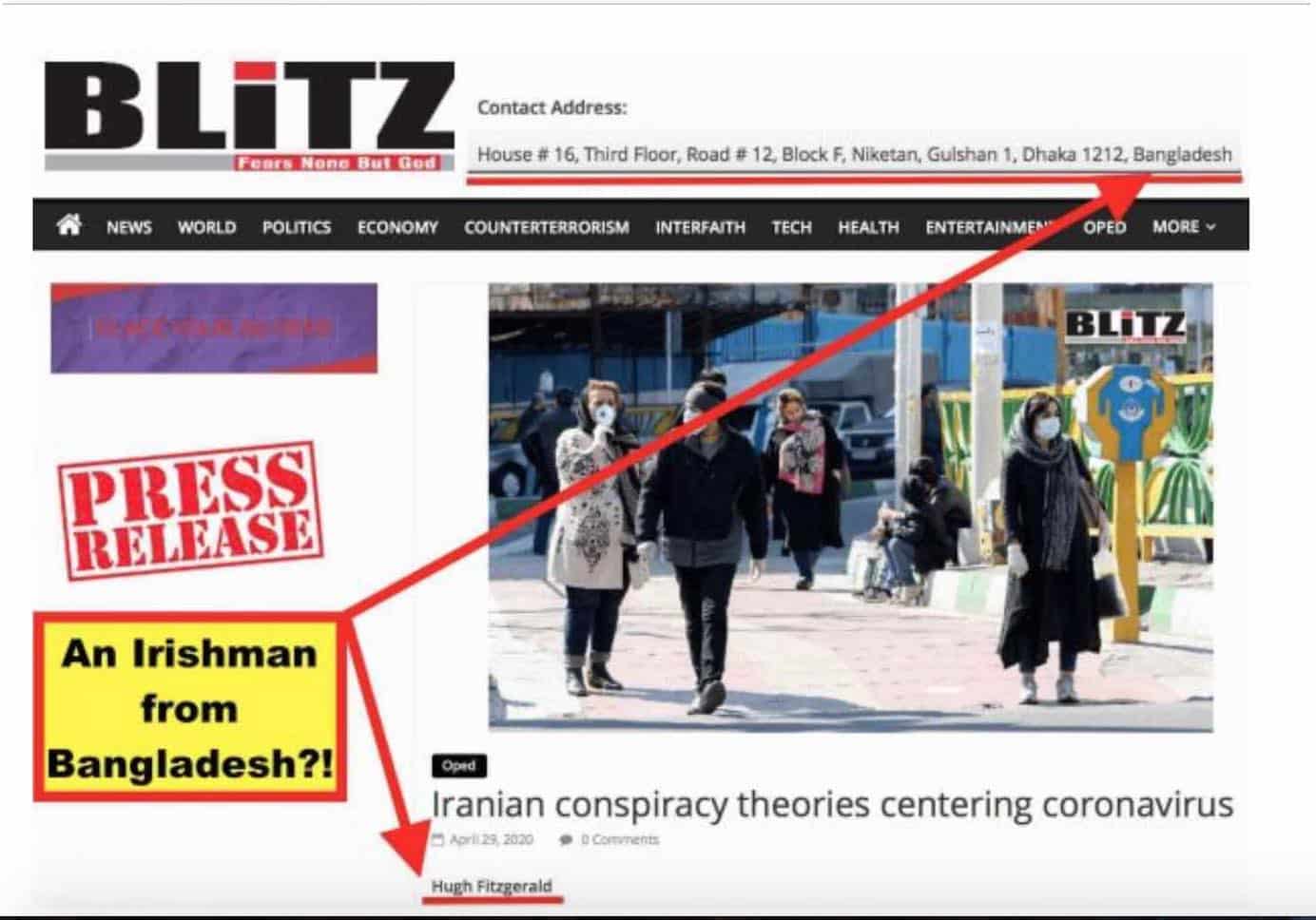 E. Michael Jones and I briefly discussed this article at the end of today’s False Flag Weekly News—watch it above, click HERE for links to the stories we covered

A certain “Hugh Fitzgerald,” writing for the Bangladesh-based Weekly Blitz, recently called me “semi-demented”—which I suppose is better than being completely demented, but still is not a very nice thing to say about someone you don’t even know. Mr. “Fitzgerald” also called me “a bizarre figure” and “cretinous.” He can’t wait for me to be “forced to shut up.” I gather he doesn’t like me very much.

Mr. “Fitzgerald” disliked my recent interview with Nader Talebzadeh, Iran’s most popular talk show host, whose audience regularly tops ten million viewers. “Fitzgerald” doesn’t like Nader, either. Nor does he like the other two guests, Dr. Ali Karami and Ayatollah Mohammad Mehdi Mirbagheri. (The latter is one of Iran’s most important religious scholars, and a candidate to eventually become the next Supreme Leader.)

Why does the Bangladeshi Irishman hate us? What set him off about this particular talk show? Why was he watching Iranian TV in the first place?!

Maybe “Hugh Fitzgerald” is an amazingly cosmopolitan individual: He’s not just an Irishman from Bangladesh, he’s also fluent in Farsi and a fan of Iranian TV talk shows. In other words, a true world citizen.

As a highly cultivated man of the world, fluent in at least four languages (English, Gaelic, Bengali, and Farsi) Mr. “Fitzgerald” naturally would look down his nose at conspiracy theories spread by the rabble, the lumpenproletariat, the hoi polloi. Maybe that’s why he hates us.

But perhaps there are other reasons. The Blitz hit piece targets those of us who suspect coronavirus is a biowar attack launched by elements of the US-NATO military-industrial complex on behalf of their Zionist bankster masters. As I wrote in my new American Free Press article “Wall Street Wages Biological Warfare on Main Street“:

Before the coronavirus pandemic, China’s rise to number one world power status seemed inevitable. The world economy, especially its Belt-and-Road component, was booming, and China was driving the boom.

The pandemic changed all that. It killed global trade, sending the world economy into a tailspin, and forcing nations to find alternatives to China-dependent international supply chains. Now the US government, which is completely controlled by the Western usury banking cartel, is forcing its vassal states such as Japan to cut trade ties with China. It is floating the idea of confiscating China’s trillions of dollars in US investments and T-bills as “compensation for coronavirus damages.”

Independent historians have convincingly argued that such history-changing crises as World War I, the Great Depression, World War II, the 1971 birth of the petrodollar, 9/11, and the 2008 collapse were all engineered by the Zionist-dominated usury banking cartel that rules the West. In every case, the bankster cartel has profited from the destruction of real economies and real value. When smaller competitors go broke, the big banksters buy up hard assets at pennies on the dollar, further consolidating wealth in the hands of the few. And crises and wars force governments to go ever-deeper into debt, borrowing from the banksters at compound interest that will enslave future generations.

Was coronavirus unleashed by the usual suspects, precisely to achieve these effects? Are we witnessing Wall Street waging biological warfare on Main Street—not only Main Street USA, but also the global Main Street represented by Chinese public banking and its Belt and Road initiative?

I admit that my thesis is a tad, shall we say, unorthodox. But still: Why would a Bangladeshi Irishman be outraged by three Iranians and one American suggesting that the coronavirus pandemic may have begun as a U.S. biological warfare strike against China and Iran? After all, Iranians have every reason to suspect that the coronavirus outbreak in their country was anything but natural. As Ron Unz recently wrote:

As the coronavirus gradually began to spread beyond China’s own borders, another development occurred that greatly multiplied my suspicions. Most of these early cases had occurred exactly where one might expect, among the East Asian countries bordering China. But by late February Iran had become the second epicenter of the global outbreak. Even more surprisingly, its political elites had been especially hard-hit, with a full 10% of the entire Iranian parliament soon infected and at least a dozen of its officials and politicians dying of the disease, including some who were quite senior. Indeed, Neocon activists on Twitter began gleefully noting that their hatred Iranian enemies were now dropping like flies.

Let us consider the implications of these facts. Across the entire world the only political elites that have yet suffered any significant human losses have been those of Iran, and they died at a very early stage, before significant outbreaks had even occurred almost anywhere else in the world outside China. Thus, we have America assassinating Iran’s top military commander on Jan. 2nd and then just a few weeks later large portions of the Iranian ruling elites became infected by a mysterious and deadly new virus, with many of them soon dying as a consequence. Could any rational individual possibly regard this as a mere coincidence?

Obviously Mr. “Fitzgerald” would insist very strongly that yes, of course it is all just a huge coincidence, and anybody who disagrees is semi-demented, bizarre, and cretinous…and what’s more, an anti-Semitic conspiracy theorist and Holocaust denier. That kind of ad hominem argument—marshalled with tediously predictable mendacity against “Iranian conspiracy theorists” and their friends—is characteristic of a certain group of people, and I am not talking about Irishmen or Bengalis.

So let’s take a closer look at The Blitz, quite possibly the weirdest newspaper in Bangladesh. If we visit their “About Us” rubric, we are greeted with the following spiel:

Welcome to Blitz, a newspaper with a distinctive difference!

Blitz is an independent newspaper, established in 2003 for the purpose of presenting balanced coverage of events. Since inception, we have been vigorously confronting radical Islam and militancy; denouncing antisemitism and Holocaust denial, and promoting interfaith harmony.”

Did a bunch of Bengalis (or Bengali Irishmen) sitting around one day over cha and hilsa curry washed down with a pint o’ Guinness, suddenly get the bright idea: “Hey! What Bangladesh really needs is a newspaper whose mission is to denounce anti-Semitism and Holocaust denial! Let’s go for it!”

If we scroll down to the “Our Team” list we see an odd ethnic mix of names. The first two editors, Choudhury and Ahmed, could be Bengali Muslims. But then we come to someone named “Judith Colp Rubin.” Another Bengali or two. Then a “Bloch,” a “Katz,” and finally, lo and behold, a name I recognize: “Daniel Pipes”: A notorious Jewish-Zionist extremist, war crimes promoter, and arch-Islamophobe.

The list of contributors, too, features a few Muslim names interspersed with a great many Jewish ones, including Pipes. What is going on here is obvious: Rich Zionist-extremist Jews have rented an office in Bangladesh, hired a couple of local coolies to front for them, and established a fake-“interfaith” propaganda rag.

Oddly, the long list of contributors, with its massive preponderance of Jewish names, does not include any “Hugh Fitzgerald,” nor any other Irish names for that matter. So who is “Hugh”? An actual Irishman who, like the Bengalis, is taking a few shekels from rich Jews to write Zionist propaganda, yet for some reason fails to show up on the contributors list?

Perhaps. But I think it is more likely that someone named Rubin or Bloch or Katz or Pipes is hiding behind the pseudonym “Fitzgerald”—a name most famously represented by F. Scott Fitzgerald, whose best known work concerns a certain Jay Gatsby, widely suspected of being a Jew passing for a goy.

Whoever he is, “Fitzgerald” works very hard pretending to refute my “coronavirus conspiracy theory.” But just as his name conceals the Jewish Zionist nature of his task, so too his article works overtime to avoid the issue of Israel’s likely connection to the coronavirus strike on Iran—and Jewish-Zionist overrepresentation in the Western bankster institutions cited on the Iranian “conspiracy” talk show, including the World Bank, IMF, WTO, and WHO. Instead, “Fitzgerald” claims “Iranian conspiracy theorists” are blaming the USA, as a nation, for the coronavirus war.

The only time “Fitzgerald” plays the anti-Semitic card is when he calls me “a great admirer of Minister Louis Farrakhan, and the author of a book on who was really behind 9/11 (say, he’s got a point — why didn’t any Jews go to work in the Twin Towers that day?)” But “Fitzgerald”’s whole discussion of coronavirus conspiracy theories is completely devoid of any mention of suspicions about Israel’s possible coronavirus role—suspicions raised by the apparent bio-attack on Iran, by Israel’s suspicious alacrity in patenting and bringing out a vaccine, by the way the pandemic has saved Netanyahu’s political career, and by Jewish-Zionist overrepresentation in the Western financial sectors that have orchestrated wars and crises in the past, and that are profiting mightily on the current pandemic.

Of course, I could be wrong. If Mr. Fitzgerald accepts my invitation to appear on my radio show, and turns out to be a fellow Irish Muslim, complete with a thick brogue, who just happened to wind up as an expat in Dakka, so down on his luck he had to take a job writing for a gang of completely demented but very well funded Zionist cretins, I suppose I will have to apologize for my ill-founded suspicions. 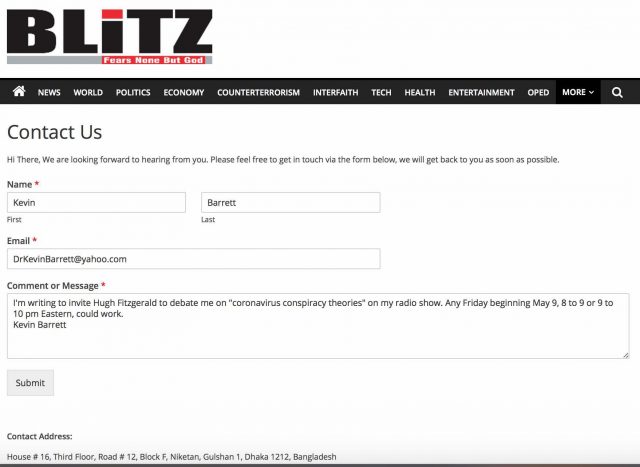