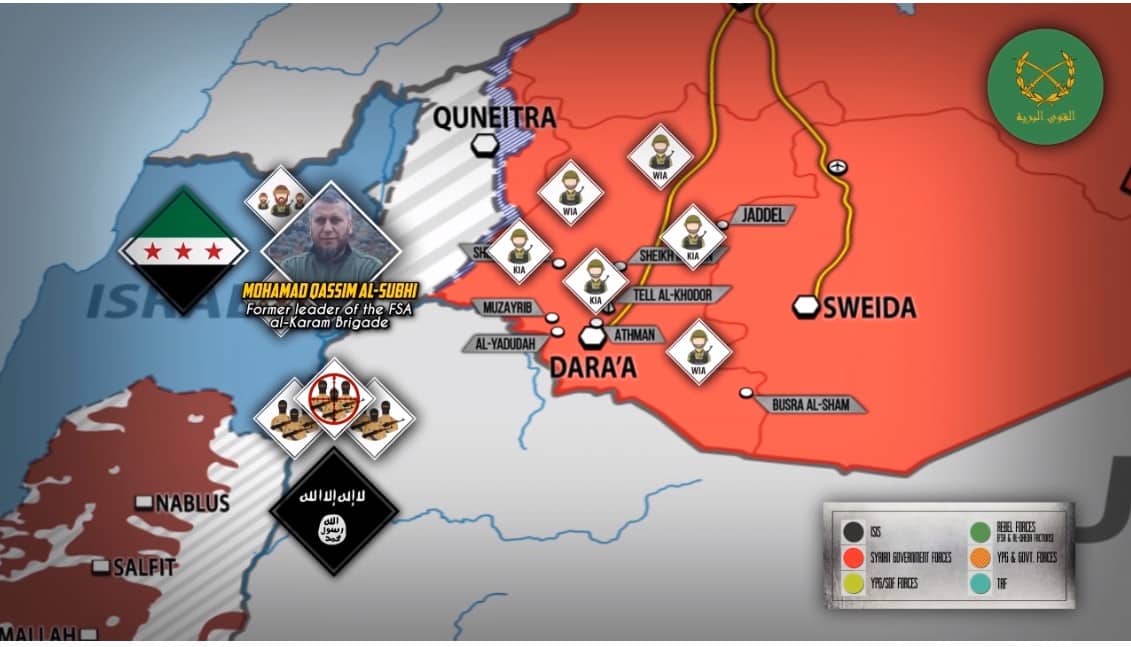 The Syrian Army and the National Defense Forces have launched a large security operation in the southern province of Daraa. For this purpose, the army recently deployed reinforcements, including up to 50 armoured vehicles and trucks equipped with weapons, in Tell al-Khodor, Athman, al-Yadudah, Saru. Sheikh Sa’ad and al-Sheikh Maskin.

The town of Muzayrib and nearby areas are the target of the operation. Government forces seek to put an end to destructive actions of an illegal armed group led by Mohamad Qassim al-Subhi, the former leader of the Free Syrian Army al-Karam Brigade, and ISIS cells operating in the area. Over the past few weeks, dozens of pro-government fighters were killed or injured in Daraa province. The most recently 9 police officers were killed in Muzayrib.

Hayat Tahrir al-Sham and Turkey reportedly reached a tactical agreement to de-escalate the situation in southern Idlib after the recent military incident between the parties near Nayrab. The meeting was held at the Turkish military point in Arihah. The terrorist group agreed to withdraw its supporters from the chunk of the M4 highway between Saraqib and Ariha and to not attack Russian-Turkish patrols there. In turn, Turkey reportedly agreed to not oppose Hayat Tahrir al-Sham’s decision to open a commercial crossing between the militant-held part of Idlib and western Aleppo near the town of Maaret Elnaasan. Earlier, Ankara and militant groups directly controlled by it sabotaged this initiative. Turkey seeks to control all the economic and social life in northwestern Syria. Meanwhile, Hayat Tahrir al-Sham sees the commercial activity between Greater Idlib and the rest of Syria as an important source of income through various fees and trafficking of goods.

The cooperation between Ankara and the al-Qaeda-linked terrorists allowed them to avoid a new round of escalation and prevent the resumption of Russian airstrikes and the Syrian Army advance in the area at least for now. The Turkish Army and the Russian Military Police held two extended joint patrols along the M4 highway on May 5 and May 7. The Russian Military Police for the first time reached the eastern entrance to Ariha. Previously, all the joint Russian-Turkish patrols were conducted in a much smaller area between the west of Saraqib and the east of Nayrab.

Tactically both Ankara and Hayat Tahrir al-Sham are interested in preventing the resumption of anti-terrorist operations in Idlib. However, they have serious strategic contradictions. Turkey seeks to establish a full control over the entire part of northwestern Syria not controlled by the Damascus government, and turn it into its own protectorate or even directly annex this territory. At the same time, Hayat Tahrir al-Sham is working to defend its relative independence from Turkey and turn the area of Idlbi into own ISIS-style caliphate. This creates conditions for further tensions between the sides that may lead to military hostilities.

Despite the Turkish success in finding understanding with al-Qaeda, the situation in southeastern Idlib still remains complicated. Late on May 7, Turkish-backed militants targeted a position of the Syrian Army near al-Burayj with anti-tank guided missiles injuring up to 10 soldiers. Pro-militant sources also claimed that a firefight erupted between Turkish proxies and Syrian troops east of Aris. On May 5, the Syrian Army destroyed two bulldozers operated by the Turkish military in the same area.

The Homs-Deir Ezzor desert is a one more source of instability. On May 7, ISIS attacked a network of army checkpoints between al-Sholah and al-Sukhnah. The assault started with an explosion of vehicle-borne improvised explosive device. Then, over a dozen of terrorists attacked army positions. They retreated after several hours of clashes. Up to 15 Syrian soldiers were reportedly killed or injured in the clashes. Pro-government sources claim that 9 ISIS members were eliminated.

This was the third large attack on Syrian Army positions in the desert area within a month. However, the complicated situation in Daraa province and on the frontline in southern Idlib do not allow the Damascus government to allocate needed resources to carry out regular security operations that would allow to contain the growing ISIS threat in the desert.