[ Editor’s Note: Well this was a breath of fresh air. We often see retired federal justice department and law enforcement people keeping their heads down so as not to be blackballed for employment in their post government careers.

This group claims to have 2000 signatures early in the game, and I suspect more will join with them as word gets around. God only knows, a lot of the public will be with them, too. Trump has wiped his feet on traditional separation of powers niceties.

When you have a political gang running the country, what you see is what you get. He has openly challenged the balance of power to better serve his true constituency, and VT readers know who that is.

I ask all to pass this around so that it is widely seen, as Trump’s big thumb on the scales of justice is a precedent that has to be torn down or those following will abuse it, also.

As VT has long reported, we already have a huge problem in the judiciary due to the long time Federalist club infiltration and influence. The Deep State was not so stupid to leave an independent judiciary on the scene that could take it down via major case litigation.

After the Israel Lobby was allowed to run rampant with US espionage and political corruption, followed by its heavy hand inside Homeland Security, we are toast if Trump gets away with what he has done. The clock is ticking on us, when it should be on him… Jim W. Dean ] 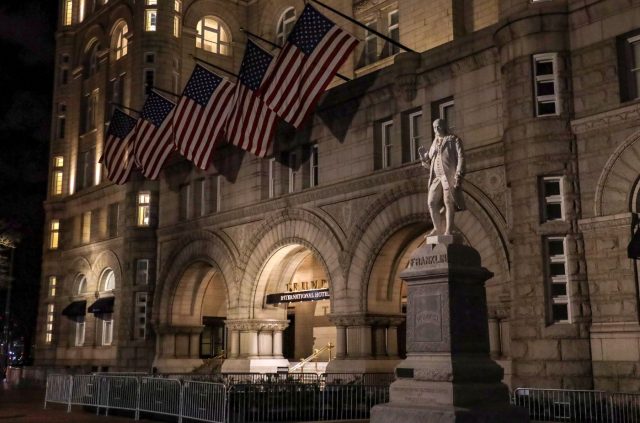 If anyone else who is not a friend of the president “were to lie to federal investigators in the course of a properly predicated counterintelligence investigation, and admit we did so under oath, we could be prosecuted,” the letter said, adding.

The letter calls on Barr to resign and encourages Congress to formally censure Barr over “his repeated assaults on the rule of law in doing the President’s personal bidding rather than acting in the public interest.”

The letter urges the judge who is in charge of the Flynn case, Emmet Sullivan, to “take a long, hard look at the government’s explanation and the evidence.”

Barr is using the Justice Department to further President Donald Trump’s personal and political evidence, it says, and “has undermined any claim to the deference that courts usually apply to the department’s decisions about whether or not to prosecute a case.”

We, the undersigned, are alumni of the United States Department of Justice (DOJ) who have collectively served both Republican and Democratic administrations. Each of us proudly took an oath to defend the Constitution and pursue the evenhanded administration of justice free from partisan consideration.

The Attorney General’s intervention in the Stone case to seek political favor for a personal ally of the President flouted the core principle that politics must never enter into the Department’s law enforcement decisions and undermined its mission to ensure equal justice under the law.

As we said then, “Governments that use the enormous power of law enforcement to punish their enemies and reward their allies are not constitutional republics; they are autocracies.”

Now, Attorney General Barr has once again assaulted the rule of law, this time in the case of President Trump’s former national security adviser Michael Flynn. In December 2017, Flynn pleaded guilty to lying to the FBI about his communications with the Russian ambassador to the United States.

Subsequent events strongly suggest political interference in Flynn’s prosecution. Despite previously acknowledging that he “had to fire General Flynn because he lied to the Vice President and the FBI,” President Trump has repeatedly and publicly complained that Flynn has been mistreated and subjected to a “witch hunt.” The President has also said that Flynn was “essentially exonerated” and that he was “strongly considering a [f]ull [p]ardon.”

The Department has now moved to dismiss the charges against Flynn, in a filing signed by a single political appointee and no career prosecutors. The Department’s purported justification for doing so does not hold up to scrutiny, given the ample evidence that the investigation was well-founded and — more importantly — the fact that Flynn admitted under oath and in open court that he told material lies to the FBI in violation of longstanding federal law.

Make no mistake: The Department’s action is extraordinarily rare, if not unprecedented. If any of us, or anyone reading this statement who is not a friend of the President, were to lie to federal investigators in the course of a properly predicated counterintelligence investigation, and admit we did so under oath, we would be prosecuted for it.

President Trump accused the career investigators and prosecutors involved in the Flynn case of “treason” and threatened that they should pay “a big price.” It is incumbent upon the other branches of government to protect from retaliation these public servants and any others who are targeted for seeking to uphold their oaths of office and pursue justice.

It is now up to the district court to consider the government’s motion to dismiss the Flynn indictment. We urge Judge Sullivan to closely examine the Department’s stated rationale for dismissing the charges — including holding an evidentiary hearing with witnesses — and to deny the motion and proceed with sentencing if appropriate.

While it is rare for a court to deny the Department’s request to dismiss an indictment, if ever there were a case where the public interest counseled the court to take a long, hard look at the government’s explanation and the evidence, it is this one.

Attorney General Barr’s repeated actions to use the Department as a tool to further President Trump’s personal and political interests have undermined any claim to the deference that courts usually apply to the Department’s decisions about whether or not to prosecute a case.

In the midst of the greatest public health crisis our nation has faced in over a century, we would all prefer it if Congress could focus on the health and prosperity of Americans, not threats to the health of our democracy.

We urge the Committee to reschedule Attorney General Barr’s testimony as soon as safely possible and demand that he answer for his abuses of power. We also call upon Congress to formally censure Attorney General Barr for his repeated assaults on the rule of law in doing the President’s personal bidding rather than acting in the public interest.

Our democracy depends on a Department of Justice that acts as an independent arbiter of equal justice, not as an arm of the president’s political apparatus.

(If you are a former DOJ employee and would like to add your name to this statement, please complete this form. Protect Democracy will update this list daily with new signatories until May 25th.)