Home World Kidnapped by Al Qaeda and Converted to Islam. Free with Help of... 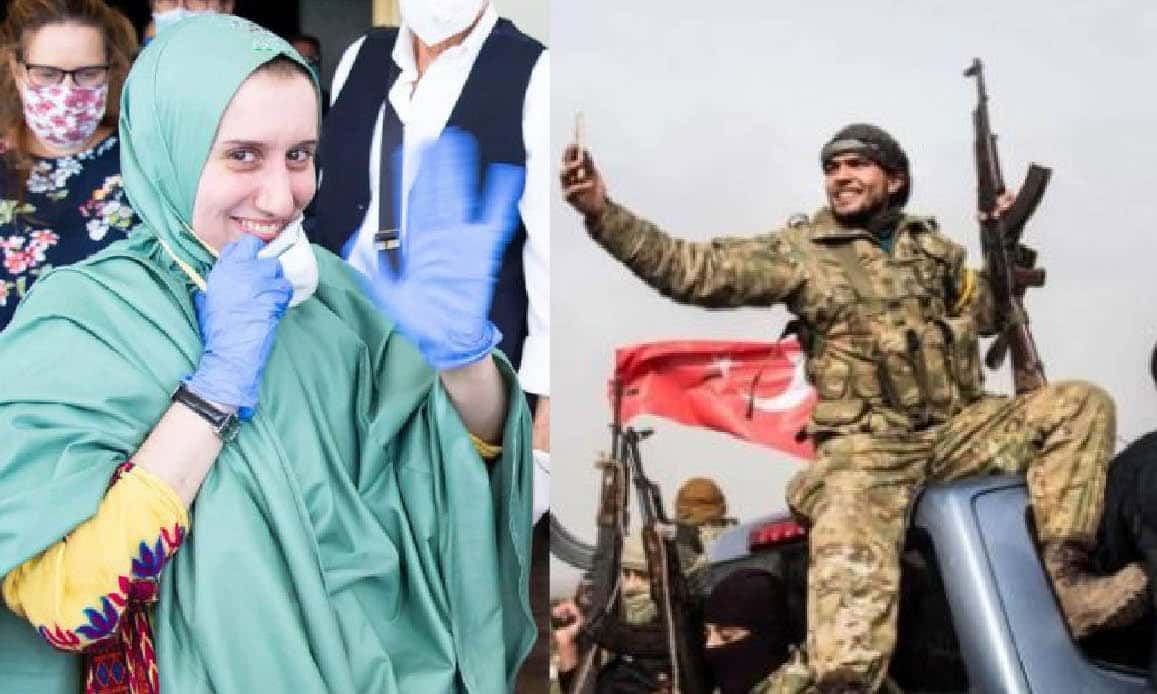 «Fortunately, I am well physically and mentally. I am very happy, after so much it is nice to be back. I am calm and during the kidnapping I was always treated well. I asked for the Koran and I was satisfied…».

These are the first words spoken by the Italian girl Silvia Romano to announce her «spontaneous and unforced conversion to Islam» on her return to Italy, dressing the Mulsim Hjiab, after an increasingly mysterious imprisonment in the hands of the notorious terrorists of Al Shabaab, the Al Qaeda branch in Somalia. She choosed the Islamic name Aisha, the same of the Prophet’s young bride.

On 20 November 2018, the girl was kidnapped by a commando of five men armed with kalashnikovs and machetes in the Chakama Guest House orphanage about 80 kilometers from the tourist coast of Malindi.

Sunday was welcomed at the airport of Rome by the Italian authorities who thanked the intelligence for the investigations by failing to comment on the unofficial news, leaked in all the media, according to which a ransom of 4 million euros would have been paid to his kidnappers, the Sunni Muslim extremists of the same terrorist organization that claimed yet another massacre in Mogadishu on December 28, 2019 with 90 deaths from an explosive attack.

But meanwhile Somalia was being bloodied by another massacre the young co-worker embraced the faith of the prophet Muhammad with the help of her captors who, for miracle, never committed any «physical or psychic violence» to her, as Silvia told.

«In recent months a Quran has been made available to me and thanks to my jailers I have also learned some Arabic. They explained their reasons and their culture to me. My conversion process has been slow in recent months. There was no marriage or relationship only respect» he said as reported by the Ansa Italian Agency.

«I moved with more than one jailer to at least four dens, which were inside apartments in the villages. They were armed and covered, but I was always treated well and I was free to move inside the dens, which were watch yourself anyway» added the now 24-year-old girl, who deposed to Rome prosecutor in the terrorist inquiry on her abduction.

«A good news. I hope that after reporting the state, she will go out of her way to track down her jailers,» said Giorgia Meloni, leader of the Brothers of Italy, the moderate right-wing opposition party.

«It would be a drama if the idea would pass that kidnapping Italians is a good business. Also on the theme of conversion: I cannot fail to reason that it is a modus operandi of a large part of Islamic terrorism» added the parliamentarian triggering a whirlwind of controversy on social media in Italy for the mysteries about the ransom payment for liberation.

The operation of the intellgence Aise, the Italian Foreign Services Agency, was conducted with the collaboration of the 007 of Somalia who in December 2019 had targeted twenty-three Somalis between pirates and jihadists belonging to the terrorist organization Al Shabaab, achieved by personal and property preventive measures in relation to the kidnapping of the girl after the investigations conducted by the Italian secret agents together with the Carabinieri del Ros and the Kenyan police.

According to ANSA  the Intelligence of Turkey has also played a fundamental role in the liberation, which raises huge questions on international diplomatic relations.

MIT (Milli Istihbarat Teşkilati), the secret services of Ankara, are in fact among the most unscrupulous ones in the world, above all for their numerous and proven correlations with jihadist terrorists of both ISIS and Al Qaeda. With a well-established strategy by Saudi Arabia, Turkey too first captured the fundamentalist terrorists, sometimes trained by themselves, and then release them only on condition that they become de facto mercenaries in international conflicts.

This is what happened in Syria where Foreign Terrorist Fighters were brought in through Turkey and from where ISIS militants were sent out to infiltrate Europe. As reported several times by the Rojava Information Center and other Kurdish bodies and media, MIT managed the relocation of 76 very dangerous leaders of the Islamic State and Al Qaeda among the jihadist factions used by Turkish President Recep Tayyp Erdogan to free Rojava by the Kurds who administer it also by virtue of the victorious war waged against Isis by their soldiers in the Syrian Democratic Forces (SDF).

In recent weeks, it was the Libyan National Army (LNA) of General Khalifa Haftar, leader of Cyrenaica at war against the Tripoli National Accord Government, to signal the arrival of the Islamic mercenaries of Turkey in Libya and the presence among them at least 229 jihadists affected by international arrest warrants for being reported as terrorists on the UN list.

A few days ago some exponents of the Sunni fundamentalists Hayat Tahrir al-Sham (HTS) who control the province of Idlib thanks to the support of Turkey were reported in the Misurata field hospital managed by the 7th Regiment of the Bersaglieri of Altamura.

The suspicions of a too close collaboration between Turkish and Italian in the military intelligence, favored by the business connections between Italy and the Muslim Brothers of Qatar thanks to the Lobby of Arms, become even more evident after the release of Silvia Romano.

Those who follow military geopolitics therefore do not even have time to rejoice at this excellent news of the release of an Italian who suddenly converted to Islam thanks to her closeness to radical Sunni extremists. Because with it comes the concern that Rome has made really embarrassing ties with Ankara: above all because the MIT of Turkey uses ferocious jihadists from Al Qaeda and ISIS as its soldiers.

Further, in Istanbul, under the nose of the 007 Turks, the Washington Post journalist Jamal Kashoggi was slaughtered inside the Consulate of Saudi Arabia. Let’s not forget it …

Exactly one year ago another Italian from Lombardy had returned to freedom thanks to the alleged mediation of Ankara. Alessandro Sandrini, a 34-year-old from Brescia hit by a pre-trial detention order for robbery, vanished into thin air on the border between Syria and Turkey on 4 October 2016 during a trip.

He reappeared serene on May 22, 2019, photographed during the press conference called for his release by Colonel Ali Kaddah, terrorist leader Hayat Tahrir al-Sham, new name of the Al Nusra Front, Syrian rib of Al Qaeda that still controls Idlib thanks in support of the Ankara army. Return with ransom for a wanted person from justice? Top secret: only intelligence can know!