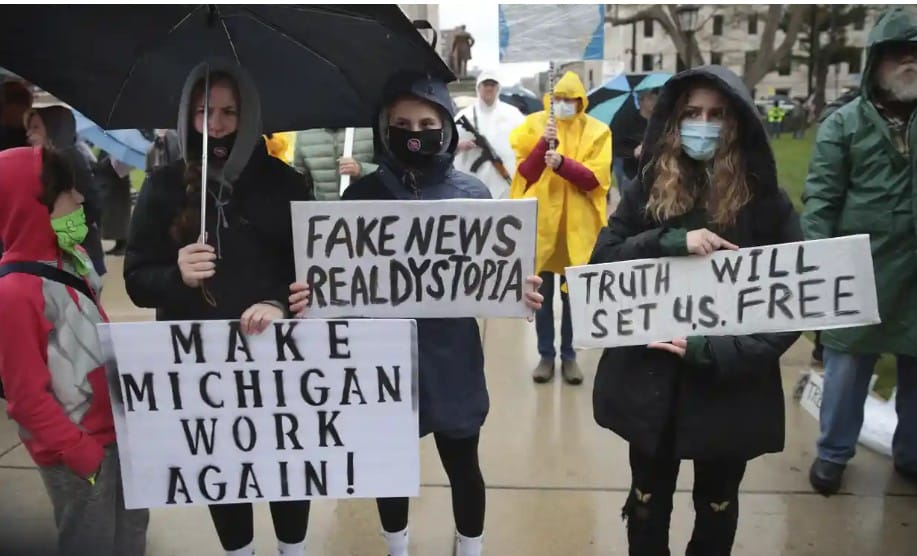 Guardian: Following a week of escalating tensions over threats of violence made against Michigan’s Democratic politicians and an ongoing, emotional debate over Gretchen Whitmer’s stay-at-home order, dozens of conservative protesters descended on the state capitol on Thursday morning.

Some arrived armed with assault rifles while others held up signs portraying the governor with a Hitler moustache and one speaker taunted police and called for Whitmer to be pulled outside and arrested for breaking the law with her emergency orders.

But the fears of serious violence that had preceded the event proved unfounded. Instead, a steady downpour and lightning pushed most of the protesters to their vehicles after about 90 minutes. Tempers only briefly flared when a scuffle ensued after one demonstrator grabbed a sign from another. Police quickly broke up the fight and no one was arrested or hurt, the Michigan state police said in a tweet.

Adam de Angeli, an organizer with (Nazi)  supremacist-linked Michigan United For Liberty, told the crowd: “We are not going to be intimidated and we are not going to be silent,” he said. “This is the biggest infringement on our rights in our history. This is devastating to our country and economy.”

Many of the demonstrators also questioned the constitutionality of the governor’s orders.