[ Editor’s Note: Dear mass media, We have done all the heavy lifting for you so you could do feature stories on this material with the good coverage that you are not responsible for.

We have not viewed it as risky to ourselves, as all the supporting material is publicly sourced, and has been for a long time, based on all the papers that have been published to validate the huge funding those doing it have received.

So what are you waiting for? This is the biggest story of our time, and it is beginning to look like it might have multiple chapters to it. We never considered for a nano-second that it was something we would sit on because it was too dangerous to publish.

Silly us, we viewed it as something that had to be published, as we have a track record of reporting on the constellation of US bio-weapons labs for years now, plus the good fortune to have had sources inside the Lugar Lab in Georgia.

Every day when you check the COVID stats, and Trump’s latest Tweet on blaming China or whoever on the pandemic, what are you going to say when your readers start asking you,

“Where were you during the pandemic coverage, picking the low hanging fruit focusing on the endless Trump gaffes, when this bio-weapons community material was just lying open on the ground like a fist-sized gold nugget?”

We found almost all of it with Google searches. Who is not going to wonder why, with your paid staff and funding which we don’t have, you took a dive? What are you waiting for? How many have to die first to get you on board?… Jim W. Dean ] 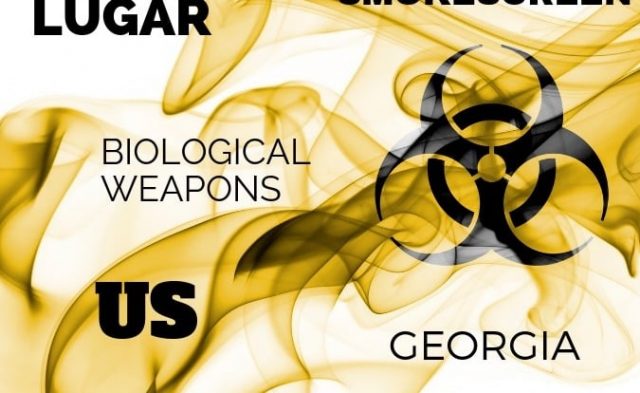 The pandemic of 2020 has exposed a gangrenous limb, the stench of which has only been hidden through and equally exposes gangrenous strangling of truth. The US military currently runs biological laboratories, some funded through USAID, some tied to universities and other groups, across the US and around the world.

These laboratories are funded in the billions of dollars and are overtly tasked with developing vaccines to protect Americans, military and civilian as well, from potential bioweapon attacks.

Much of this research involves creating “chimera” viruses, mostly corona-based bat viruses, that manifest themselves as devastating airborne plagues that destroy lung tissue. The US has partnered around the world, China, the Republic of Georgia, across Africa, capturing bats and weaponizing the diseases found, using gene splicing.

Then vaccines are developed, ostensibly, as a protection against other nations who are doing the same so that the United States is never the victim of a pandemic that may well infect a million and kill a hundred thousand or more.

The research on the creation of the viruses is published. Their effects, including and especially the difficulty in creating vaccines to treat them, is carefully outlined as in research done at Harvard or the University of North Carolina.

There is never published research on the cures and preventions, the treatments, the vaccines that these studies, that these billion-dollar studies come up with.

One once considered the withholding of such data as an issue of national security, that the US wanted to maintain an advantage if an adversary, though there are no proven adversaries involved in such research despite allegations, were to unleash a coronavirus attack on the US.

You see, the US, as early as November 2019, has come under attack, of a sort anyway, from such a virus, be it somewhat “natural” or contrived by an adversary real or imagined.

The ensuing pandemic, which has crippled the United States, should well have triggered the deployment of biological research capabilities achieved through $10 billion in research into bat-borne coronaviruses which, we were told, included treatment protocols and vaccines.

Now we find, lo and behold, that after $10 billion in research in how to make viruses identical to that which now threatens the US (and so many other nations as well), in fact no treatments or protocols were developed at all, no vaccines, no anti-virals, nor any plans or preparations made to protect either the US or its military forces.

In fact, nothing whatsoever was accomplished other than creating bioweapons supposedly intended for the development of protective capabilities.

One could construe, were one of a questioning nature, that America’s vast program of bioweapons research has always been one of weaponization only and has in no way whatsoever taken into account the security of the United States and the protection of its people.

Then we look further for confirmation of this hypothesis, a devastating one which seems, thus far, to put the US under scrutiny as a rogue nation involved in illegal research in direct violation of international conventions that the US is still party too.

A basic proof would be to look at the papers published, primarily since 2002, and look for patterns, names involved, areas of research, funding origins, basic analytical intelligence work.

Veterans Today tasked a team with doing this, led by medical professionals including a director of the World Health Organization. Their findings took little effort as no effort to conceal a glaring truth was made, either out of hubris or, more likely, confidence that interest in a painful truth could be easily deflected.

One would assume, out of rationality, that if a pandemic struck the US, those scientists who were the world’s experts on the varying bat-related coronaviruses, scientists tied to the US facility at Fort Detrick, Maryland or at major universities, scientists whose published work has been financed by the Pentagon and USAID, would have been immediately called upon to combat what is termed COVID 19.

The list of scientists (names withheld), constituting the most qualified epidemiologists and virologists experienced in the highly specific area of the Wuhan Horseshoe Bat Virus and its many analogs, is readily available to the public or investigative journalists.

Yet, when one peruses their publications, their obvious expertise as it applies to the current pandemic, one is shocked to find that none of the experts are, in any way, involved in finding cures or treatments.

Moreover, they are not only not being called upon but they are also not coming forward as well, and, worse still, no one is asking why.

Some call it the “military mind.” Born of privilege, of exceptionalism, and of the utter lack of moral compass, the “grandmasters” of the Pentagon and their partnership with a scientist of a similar ilk, may well have brought the planet low, sickened millions and killed countless more.

Clearly definable through countless published scientific papers, all peer-reviewed and published in prestigious journals, a small army of the world’s top virologists and epidemiologists have tied themselves to “military research,” mostly since 9/11.

The history of bioweapons as a mainstay of US policy originates in the 19th century with the Cherokee “Trail of Tears.” This claim was made by author Ward Churchill and has, over and over, been denied, typically by Pentagon financed researchers tasked with cleaning the very checkered history of the US military of its long list of massacres of civilians, of prisoners of war and of its torture and genocidal removals.

There is a simple truth. There is nothing the Pentagon will not do based on its ability to wave the flag, and if that doesn’t work, threaten and bury those who would expose wrongdoing.

That said, based on the gullibility of the American people, which shows no limits whatsoever, the sinister forces that have led the US military, cloaked in a bloody flag, into gangsterism and worse, embracing pseudo-religious cults, fomenting torture and terrorism on a grand scale, have found their ultimate weapon.

The proof is there for any to see, Pandemic is a weapon.