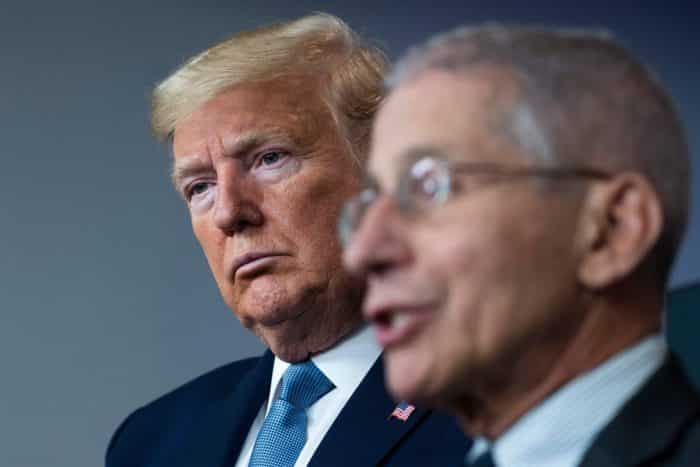 No Benefit from Hydroxychloroquine for COVID-19

In March Trump tweeted: “HYDROXYCHLOROQUINE & AZITHROMYCIN, taken together, have a real chance to be one of the biggest game changers in the history of medicine. The FDA has moved mountains – Thank You!” He has continued to support this untested drug since, turning what should have been a minor footnote in the COVID-19 pandemic into a political controversy.

As evidence of putting politics above science, Dr. Rick Bright claims he was removed from his post simply for questioning the promotion of hydroxychloroquine:

Dr. Rick Bright was abruptly dismissed this week as the director of the Department of Health and Human Services’ Biomedical Advanced Research and Development Authority, or BARDA, and removed as the deputy assistant secretary for preparedness and response. He was given a narrower job at the National Institutes of Health.

In a scorching statement, Dr. Bright assailed the leadership at the health department, saying he was pressured to direct money toward hydroxychloroquine, one of several “potentially dangerous drugs promoted by those with political connections” and repeatedly described by the president as a potential “game changer” in the fight against the virus.

The Plandemic conspiracy theorists promoted hydroxychloroquine as a cure for the pandemic, suggesting the government (yes, the same one headed by Trump) was withholding it to make money off an eventual vaccine.

The right wing media has championed the drug, seeing it, apparently, as a way of supporting Trump, and characterizing any criticism of the drug as a means of undermining the president. Most enthusiastic among them is probably Laura Ingraham. In a sly anti-science statement she said: “I love everybody, love the medical profession. But they want a double-blind controlled study on whether the sky is blue.”

The implication here is that the effectiveness of hydroxychloroquine in treating COVID-19 is obvious, based on anecdotal evidence and selected preliminary reports, and so why are we wasting our time with further more rigorous study?

Meanwhile, the majority of the medical profession was appropriately cautious.  David Gorski wrote about it on March 23 concluding:

The bottom line is that more data are desperately needed. Sadly, the French study doesn’t provide us with the data needed and has muddied the waters more than clarified whether using hydroxychloroquine to treat COVID-19 is an effective intervention.

I first mentioned in on April 8th, concluding:

The probability that hydroxychloroquine will turn out to be an effective treatment for COVID-19 is not zero as there is some encouraging pre-clinical data. But the probability, based just on pre-clinical data, is extremely low. Most treatments that look encouraging don’t pan out, for a variety of reasons. It is perhaps more likely that this drug will cause more deaths and harm from side effects and other unintended consequences (like depriving people who actually need the drug) than it will help with the pandemic. At this point all we can say is that rigorous clinical trials are needed. But this requires patience, and that is in short supply during a crisis.

Fauci and other experts basically took the position that this drug should be studied, and should not be taken outside a clinical trial, or at least a controlled medical setting. So who was right, the experts or the political pundits? I think you know the answer.

In the last week four large studies of hydroxychloriquine have been published in prestigious journals, two in the BMJ, one in JAMA, and one in the New England Journal of Medicine. All four studies were negative – they showed no benefit from hydroxychloroquine in COVID-19. But let’s give a quick summary of each study.

One of the studies, a study from China published in the BMJ, was a controlled trial (the other three are observational). This included 150 mild to moderate patients, 75 randomized to getting hydroxychloroquine and 75 usual care. The main outcome was negative seroconversion (blood test for the coronavirus becoming negative after being positive). They also followed clinical outcome and adverse events. They found:

Administration of hydroxychloroquine did not result in a significantly higher probability of negative conversion than standard of care alone in patients admitted to hospital with mainly persistent mild to moderate covid-19. Adverse events were higher in hydroxychloroquine recipients than in non-recipients.

The second BMJ article was from France, and involved 181 patients with COVID-19 requiring oxygen therapy. Here are the numbers:

As you can see, there is no effect at all here. There is no even a trend toward improvement with the drug, so you cannot argue that the study was just underpowered. Of note, 10% of the treated patients had to stop the drug because of EKG changes. Hydroxychloroquine is known to cause dangerous rhythm changes in the heart. If these patients were not being carefully monitored, they may have suffered cardiac death as a result of treatment.

The JAMA and NEJM studies were both larger studies, involving 1438 and 1446 patients respectively. The JAMA study was a multicenter study in New York State, and the NEJM study was performed in a major hospital in New York City. And their conclusions, JAMA first:

Among patients hospitalized in metropolitan New York with COVID-19, treatment with hydroxychloroquine, azithromycin, or both, compared with neither treatment, was not significantly associated with differences in in-hospital mortality.

In this observational study involving patients with Covid-19 who had been admitted to the hospital, hydroxychloroquine administration was not associated with either a greatly lowered or an increased risk of the composite end point of intubation or death.

And again, there wasn’t even a beneficial trend. If anything, most of the data was trending negative for hydroxychloroquine, although not statistical significant. As each of the four article pointed out, this data is not definitive because they are not large randomized double-blind controlled trials (you know, the kind that Ingraham says is not necessary). But what does that mean? Do we have to do such trials? I don’t think so, even though they are happening.

The current level of evidence, multiple large trials that are observational but rigorous in different settings with different researchers, all finding no benefit, and if anything a negative or neutral trend, is pretty damning. This is the level of evidence that would be used to determine if the investment and risk to patients of doing controlled trials is worth it, and the answer would likely be no.

The question we have to ask is this – if there were any benefit from hydroxychloroquine in COVID-19 would we be seeing some evidence of that benefit in this data. The answer is – almost certainly yes. Any clinically significant effect should be apparent in the existing data. Of course we cannot rule out a tiny effect – the smaller the effect, the larger the trials needed to see it, and we can never rule out a zero effect. But we can answer the question for an effect big enough to be clinically significant, and that answer is very likely to be – no effect from hydroxychloroquine. The probability that more rigorous or larger studies will find a significant effect missed by these trials is vanishingly small.

In addition, scientists have been publishing and updating systematic reviews and metaanalysis of all hydroxychloroquine COVID-19 studies in real time to provide updated information. The most recent one using data published up to May 14th (so it should include these four studies) concluded:

This systematic review and meta-analysis not only showed no clinical benefits regarding HCQ treatment with/without azithromycin for COVID-19 patients, but according to multiple sensitivity analysis, the higher mortality rates were observed for both HCQ and HCQ+AZM regimen groups, especially in the latter.

Some risk, no benefit. They include the usual caveats that most of the data is observational. But again, any significant benefit should be showing itself in this data.

Experts were cautious about hydroxychloroquine for a reason.