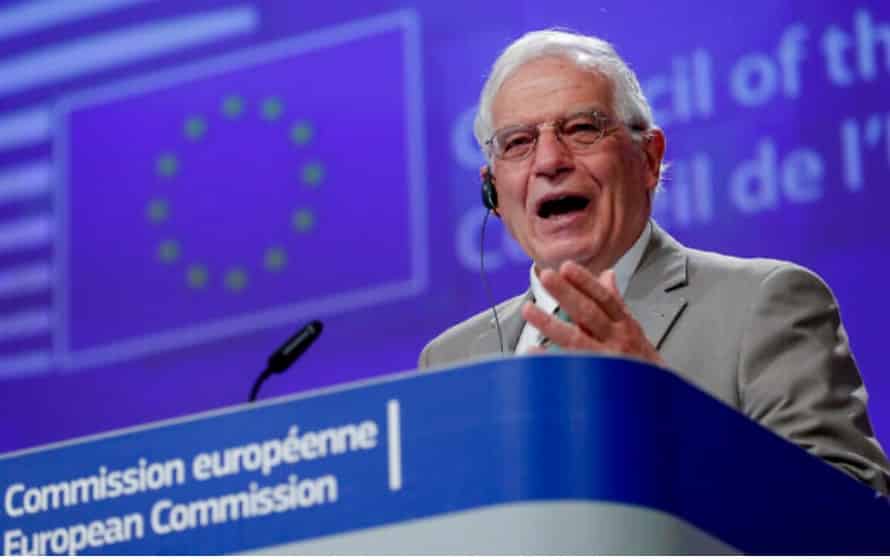 The Foreign Ministry on Tuesday hit back against the European Union’s “megaphone diplomacy” after the bloc’s foreign affairs chief, Josep Borrell, again warned Jerusalem against the unilateral annexation of West Bank territory in a message congratulating the Jewish state on its new government.

“The Israeli Foreign Ministry would like to thank the EU for their message congratulating Israel on the swearing-in of a new government,” spokesperson Lior Haiat said in a statement.

“Israel and the EU share history, values, interests, opportunities and both face threats. It is regrettable that once again, the security of Israel, a key partner of the EU, and the threats that Israel face, were not mentioned at all and were not given the centrality that they should be in such a message,” he said.

“This ‘megaphone diplomacy’ is not a substitute for intimate diplomatic dialogue and will not advance the role the EU is seeking to fulfill,” Haiat added.

Foreign Minister Gabi Ashkenazi, in his inaugural speech as top diplomat, said Monday that Israel expects “a significant dialogue with our allies in Europe,” Haiat noted. (Ashkenazi’s exact quote was: “Israel and Europe are important partners, and I am sure that the relations we share will be fruitful and beneficial for both sides.”)

In that speech, Ashkenazi also hailed the US administration’s plan for an Israeli-Palestinian peace agreement as a “historic opportunity” to shape Israel’s borders, but stopped short of explicitly endorsing a unilateral annexation of West Bank territory. 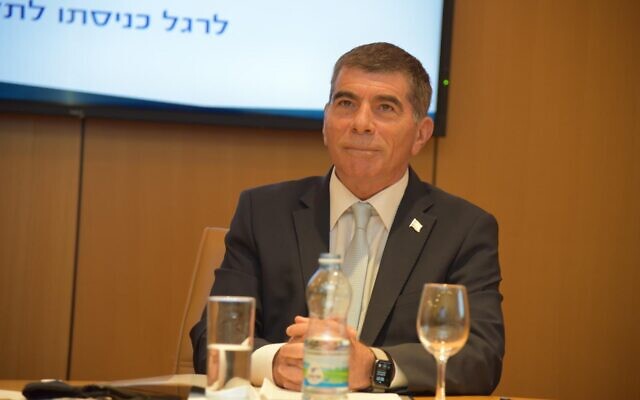 On Monday evening, Borrell issued a brief statement that largely focused on the Israeli-Palestinian conflict, the need for a two-state solution, the importance of international and Brussel’s “grave concerns” over Jerusalem’s supposed plan to unilaterally annex the Jordan Valley and all settlements across the West Bank.

In the first of three paragraphs, the top European diplomat congratulated Israel’s new government, calling the Jewish state a “key partner” for the EU.

“We look forward to continuing working with the Israeli government in a constructive and comprehensive way, in the spirit of the longstanding friendship that binds us to Israel, in order to develop our relationship in all areas, in particular in matters such as COVID-19, education, research and development and any other area of mutual interest,” he said.

His statement then emphasized that international law was a “fundamental pillar of the international rules-based order” and noted that the EU and its member states would not recognize any changes to the pre-1967 lines unless agreed to by both Israel and the Palestinians.

“The two-state solution, with Jerusalem as the future capital for both States, is the only way to ensure sustainable peace and stability in the region,” Borrell declared. “In this vein, we note with grave concern the provision – to be submitted for approval by the Israeli cabinet – on the annexation of parts of occupied Palestinian territories.

“We strongly urge Israel to refrain from any unilateral decision that would lead to the annexation of any occupied Palestinian territory and would be, as such, contrary to International Law,” he said.

The statement was issued in Borrell’s name because there was no consensus on it among the EU’s 27 member states. According to several sources familiar with the matter, Hungary, Austria and other countries reasoned that now was not the time for such statements.

On the other hand, some member states, including Ireland and Luxembourg, sought to issue a statement that was even harsher, including mentioning steps the EU may consider if Israel were to advance its annexation plans. Given the near-certain veto of such a text by Budapest and Vienna, some countries considered issuing a separate joint statement listing possible sanctions against Israel as a deterrent against annexation, but this has not materialized so far.

Some EU member states have also asked Brussels to prepare an “options paper” that would detail the various diplomatic and economic sanctions the bloc could take, but work on such a document has not yet started, sources told The Times of Israel.

“We must work to discourage any possible initiative towards annexation,” Borrell said Friday after a discussion on the matter by the EU foreign ministers. “This will require reaching out, by all of us, to Israel, US, Palestinians and Arab partners, using all channels that the EU and the Member States have. Our discussions on this complex topic will continue, we will not advance events.”

While there has not been consensus among EU members as to how to proceed, “everybody agreed” that the union has to increase its efforts to prevent an Israeli West Bank annexation, Borrell said.

“Believe me, we are ready to do that and we will do that in the next days using all our diplomatic capacities in order to prevent any kind of unilateral action,” he added. “And if this happens, then we will see. But for the time being, our efforts are devoted to the diplomatic action in order to avoid any unilateral action and in support of a negotiated two-state solution.”

In early February — shortly after the US administration released its so-called deal of the century that okays an Israeli annexation of large parts of the West Bank — Borrell had hinted at possible sanctions when he said that “steps towards annexation, if implemented, could not pass unchallenged.”

Now, more than ever, is the time to support quality journalism
A MESSAGE FROM THE EDITOR
DAVID HOROVITZ

Our team is covering the coronavirus crisis in Israel and the Jewish world around the clock – because we know how essential trustworthy information is to you right now. If you appreciate the fast, fair and free journalism of Times of Israel, then now is the time to support our work – and receive an AD-FREE experience.