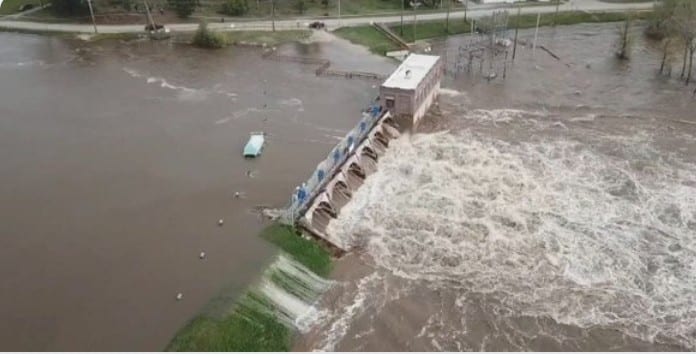 Daily Beast: People in Michigan are facing historic floods on top of the coronavirus pandemic—but, rather than offering some help, President Trump has threatened to make things even harder. After an apparent misunderstanding, Trump has threatened to withhold unspecified funding from the state because, he said, it mailed out millions of absentee ballots for the upcoming primaries and presidential election.

Hi! 👋🏼 I also have a name, it’s Jocelyn Benson. And we sent applications, not ballots. Just like my GOP colleagues in Iowa, Georgia, Nebraska and West Virginia. https://t.co/kBsu4nHvOy

But that’s not the case—state officials said Tuesday that all registered voters will receive applications for absentee ballots to give them the choice to take part in elections without the risk of infection by the deadly virus.

Trump has, knowingly or not, misunderstood that important distinction. The president wrote Wednesday morning: “Breaking: Michigan sends absentee ballots to 7.7 million people ahead of Primaries and the General Election. This was done illegally and without authorization by a rogue Secretary of State. I will ask to hold up funding to Michigan if they want to go down this Voter Fraud path!”

UPDATE: Two Michigan dams have now failed, threatening the nearby city of Midland with as much as 9 feet of water https://t.co/ak426c6cJT

Trump drew a quick response and correction from Jocelyn Benson, Michigan’s secretary of state: “Hi! I also have a name, it’s Jocelyn Benson. And we sent applications, not ballots. Just like my GOP colleagues in Iowa, Georgia, Nebraska and West Virginia.”

Thousands of people have been forced to evacuate their homes as rapidly rising waters caused by two "catastrophic" dam failures threaten to flood parts of Midland County, Mich., under as much as 9 feet of water. https://t.co/ONEodhaGWq

"Downtown Midland could be under approximately nine feet of water."

Michigan Gov. Gretchen Whitmer declared a state of emergency for one county after two dams failed in the area — following heavy rains and flash floods across the state. https://t.co/55KcLGyGd7