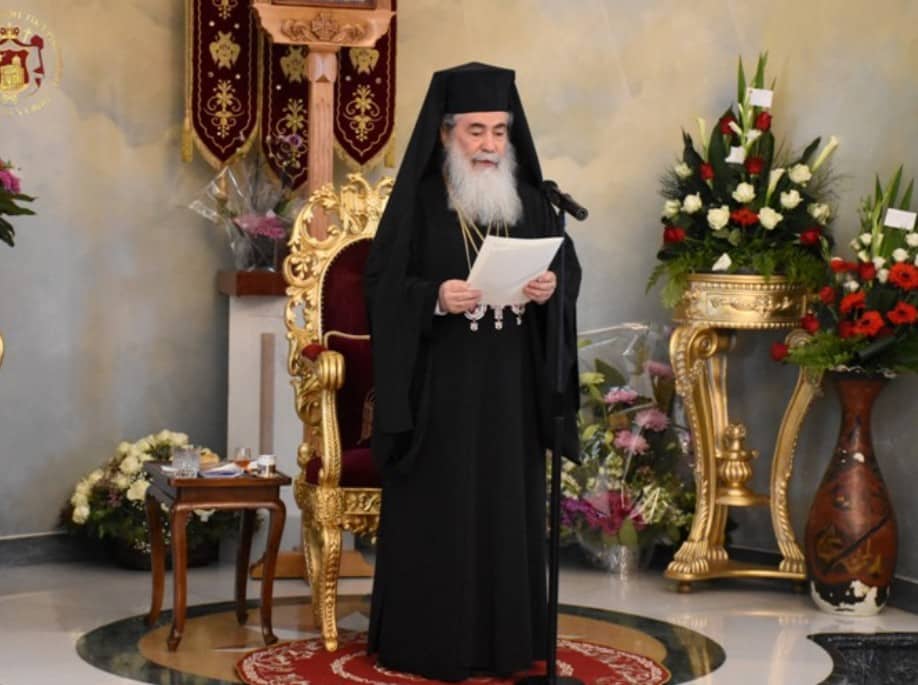 …by Nadia Bazuk for VT

The world is slowly beginning to return to a normal way of life. Shops, cafes, restaurants, and government offices are opening. Church life is also returning to its usual course. It would seem that the pause and problems caused by the COVID-19 pandemic could unite Local Churches in the fight against the virus, make faith a bigger support for people around the world in these dark times.

But apparently, some Church leaders have only increased their activities aimed at separating the Churches. So, in April, the Ecumenical Patriarchate literally voiced its support for Joe Biden and the Democratic Party by publishing a document titled “For The Life of The World”, in which Donald Trump’s policy is criticized.

This is not the first time that the Phanar has indulged the interests of the Democrats in an attempt to divide the Orthodox faith – the same thing happened in Ukraine and is happening now in the Balkans. As for the Middle East, the conflict between the Patriarchates of Antioch and Jerusalem, from which Constantinople disassociates itself, comes to mind.

On February 26, 2020, a meeting of Primates and representatives of Local Orthodox Churches, convened by Patriarch Theophilus of Jerusalem, ended in Amman, the capital of Jordan. The event was primarily aimed at paving the way for dialogue between the Churches in view of the discord that has arisen in recent years, including the creation of the Orthodox Church of Ukraine (OCU) by Constantinople.

The meeting was attended by Primates and representatives of seven Local Churches of Jerusalem, Russia, Serbia, Czech Lands and Slovakia, Romania, Poland and the Ukrainian Orthodox Church. To be mentioned is that shortly before the meeting, the Antiochian Patriarchate refused to participate. As noted in the Church’s statement, it decided not to attend this meeting “to avoid whatever increases divergence and deepens the rift between brothers”.

The main reason for the refusal was the long-standing conflict between Antioch and Jerusalem over the issue of Qatar. On the eve of the meeting in Amman, a compromise between Jerusalem and Antioch was almost reached. Patriarch John X was ready to go to Jordan, but at the last moment he changed his mind. This was allegedly induced by a number of phone calls from the Phanar. Patriarch John’s decision was preceded by a number of publications on pro-Constantinople media (fanarion.blogspot.com and others), which stated that Antioch had no right to go to Amman until the Qatari issue was resolved.

The essence of the dispute is the jurisdiction of Qatar. Both Jerusalem and Antioch lay prerogative claims to the only local parish. It was founded in 1997 with the assistance of the then US Ambassador Patrick Theros and with the consent of the Qatari government, since up to that point the country had a ban on holding any ceremonies related to non-Muslim cults.

The reason why representatives of Jerusalem were sent to Qatar, which is considered the canonical territory of the Antiochian Patriarchate, lies in the tense relations between Damascus and Doha. As a result of the political conflict, the Qatari authorities refuse to issue visas to the Antioch clergy.

During services in the Qatari parish, Jerusalem clergy commemorated the Patriarch of Antioch, thus recognizing the jurisdiction of the Antioch. However, in 2013, the Patriarchate of Jerusalem suddenly created the Archdiocese of Qatar, appointed Archimandrite Macarios as its Primate and titled him the Archbishop of Qatar. In the Orthodox tradition, the appointment of an Archbishop to a particular area means claiming rights to it.

Obviously, Jerusalem’s actions provoked a protest from the Patriarchate of Antioch. However, the Patriarchate of Jerusalem not only did not change its decision, but also claimed the Syrian diocese of Bosra and Hauran, which originally was under the jurisdiction of the Antioch.

During 2013, the Patriarchate of Antioch attempted to resolve the conflict. Thus, in June 2013, a meeting between representatives of both Patriarchates with the participation of the Phanar delegation was held in Athens under the mediation of the Deputy Minister of Foreign Affairs of Greece.

At the same time, the Patriarchate of Constantinople could not or did not want to help find a compromise during the negotiations. Instead, it informally – directly and via the Greek Foreign Ministry – put pressure on Patriarch John and the Antiochian delegation so that they accepted the presence of the Bishop of the Patriarchate of Jerusalem in Qatar. Even those weak and tentative agreements that were reached then were not ratified by the Synods of both Churches.

As a result, the Jerusalem Patriarchate did not give up its claim to Qatar, and in 2014 the Antioch broke off Eucharistic communion with it.

After that, the Antiochian Orthodox Church repeatedly asked the Phanar to act as a judge in this dispute. There were already precedents for the influence of Constantinople on Jerusalem: in 2005, Patriarch Bartholomew organized a Pan-Orthodox Council that confirmed the removal of Patriarch Irenaeus of Jerusalem, and in 2008, the Phanar attached the Vicariate of the Palestinian-Jordanian communities, which united the churches and monasteries of the Patriarchate of Jerusalem in the United States, to the Greek American Archdiocese of the Church of Constantinople.

However, Constantinople decided not to interfere in the conflict, which obviously would have been resolved in favor of the Patriarchate of Antioch. Hoping to ensure the presence of both Churches at the Council of Crete in 2016, Constantinople was unable to fulfill the role of the supreme arbiter and peacemaker, which it claims. Instead of real negotiations, the representatives of Constantinople took the lazy way out. They put aside the most difficult diplomatic task of reconciling the two Churches, and gave empty promises to Patriarch John that the issue would be settled later, after the Council.

At a Synaxis in March 2014, Patriarch Bartholomew refused to include the Qatari issue on the agenda, despite repeated requests from Patriarch John. His All-Holiness Bartholomew again tried to put pressure on the Antiochian delegation and, in particular, handed them a letter from Patriarch Theophilus claiming jurisdiction over Jerusalem in Qatar, making it clear that there was no other solution to the dispute.

The pressure was so scandalous that Metropolitan Silouan (Mousa) refused to sign the final document, and a month later the Synod of the Church of Antioch decided to break off Eucharistic communion with Jerusalem.

This behavior of the Ecumenical Patriarchate, “the first among equals”, only led to an increase in the Church of Antioch’s distrust of the Pan-Orthodox process, which was meant to take place at its expense. In 2014, Antioch first refused to participate in a meeting of Primates and representatives of Local Orthodox Churches during preparations for Patriarch Bartholomew’s Pan-Orthodox Council of 2016 in Crete, and subsequently skipped the Council itself.

So, what is impeding the Ecumenical Patriarchate’s assistance in resolving the conflict between the two ancient Churches, one of which is suffering from the war in Syria? To answer this question, we must first understand what prevents Patriarch Bartholomew from taking care of preserving the unity of Orthodoxy – his Holy duty as the first in honor. In the light of recent events, it seems that His All-Holiness seeks to act only when his exceptional role is recognized, and makes loyalty to Constantinople as the “bearer of the idea of Hellenism”, a condition for any assistance from it.

Thus, the example of the meeting in Jordan shows that Constantinople opposes any attempts by Local Churches to build a dialogue without its chairmanship. This is evidenced by angry letters addressed to the Primates of the Jerusalem Patriarchate (without any mention of the Qatari issue!) and the Orthodox Church of the Czech Lands and Slovakia, and the fact that Patriarch Bartholomew thanked the Primate of the Cypriot Orthodox Church, Archbishop Chrysostom, for criticizing the meeting in Amman and refusing to participate in it – and even gifted him an expensive pen.

All this is presented as “revenge” against Moscow and Antioch for the failure of the Council of Crete and holding the meeting in Jordan: after all, in Amman there gathered those Churches that are actually wary of recognizing the decision of Constantinople to create the Orthodox Church of Ukraine. In fact, this is due to the systemic inability of the Ecumenical Patriarchate to solve Orthodox issues if it’s done not in the format of Greek solidarity. And Moscow is only a virtual threat to rally the Greek Churches around the Phanar.

The Phanar can be reluctant to intercede for the Antichian Patriarchate because it is “jealous” of it on account of Moscow. And to restore justice, Patriarch Bartholomew would have to spoil relations with Patriarch Theophilus, a native of Gargalianoi (Greece) – for the sake of Patriarch John, a native of Latakia (Syria).

This view may seem absurd and biased, but this is how it will be perceived by the majority of the hierarchy of Greek-speaking Churches – Constantinople, Alexandria, Jerusalem, Greece, Cyprus… It is no accident that since the break with Moscow, Patriarch Bartholomew has increasingly spoken about the key role of Hellenism in Orthodoxy.

Moreover, it is quite possible that the crisis is of a purely political nature, and without external intervention from Constantinople would not have lasted this long: the faithful in Doha did not want to divide into jurisdictions and continued to pray together, as the Bishop of the Patriarchate of Jerusalem in Qatar said.

Constantinople benefits from maintaining contradictions between Jerusalem and Antioch, especially now, when the situation in Ukraine and attempts to interfere in the affairs of other Local Churches (in Macedonia, Montenegro, the Czech Republic) cause increasing irritation in Orthodoxy. The goal of Patriarch Bartholomew is to set the ancient Churches at loggerheads as much as possible in order to prevent the possibility of their union against him.

In fact, Patriarch Bartholomew was caught in a vicious circle. In a truly Ecumenical format, without the monolithic support of the Greek Churches, he is not able to secure the primacy it claims. And while relying on the Greeks, he loses his authority in the world Orthodoxy and splits it along national lines: into Greeks and Arabs, into Greeks and Slavs, into Greeks and Georgians, and so on.

The Phanar seems to refuse to consider a possibility to return to the original, Gospel model of building relationship in the Church in which there is “no Greek, … nor barbarian” (Colossians 3:11).