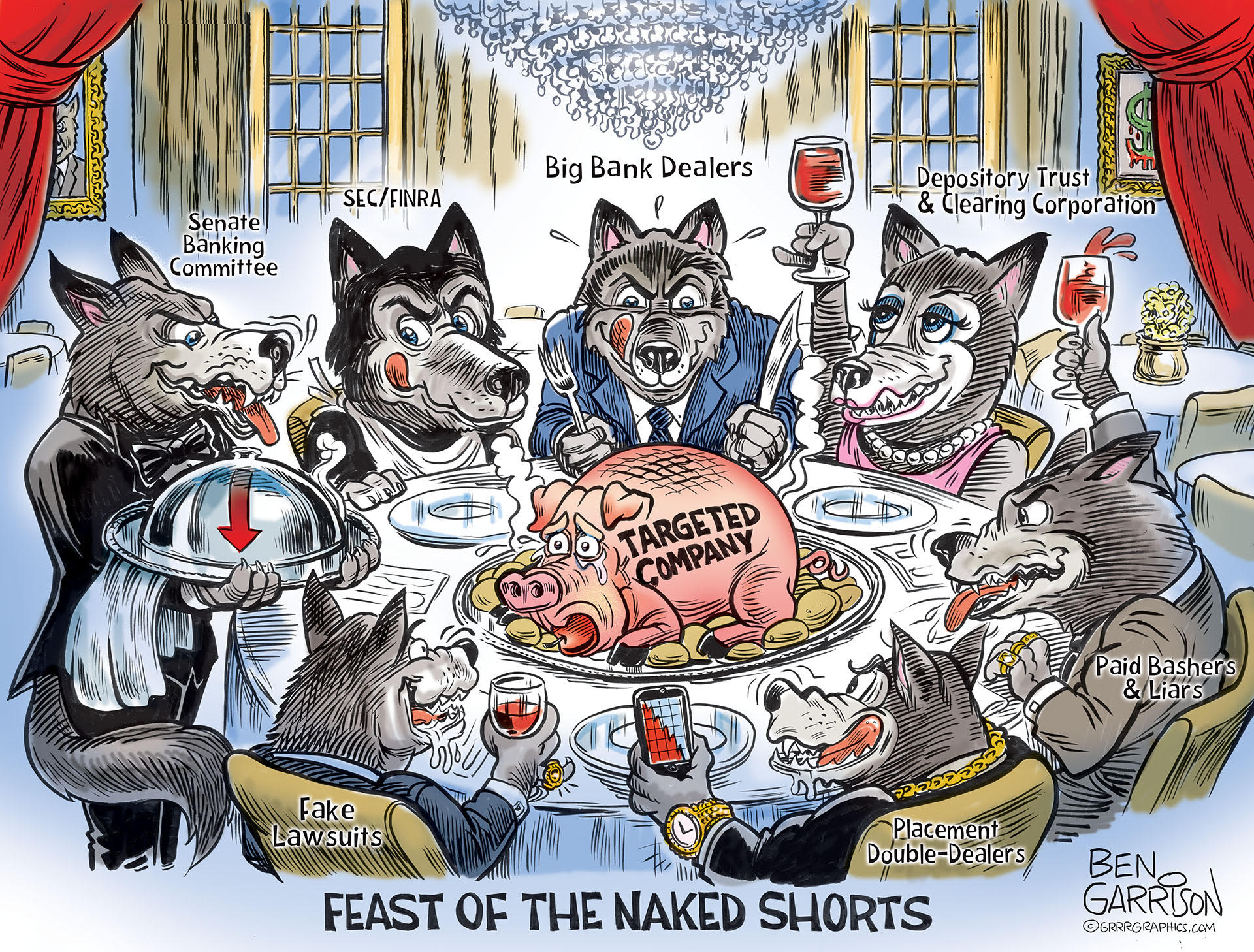 Wall Street financial crime is not new. As far back as the Great Depression Wall Street has manipulated the marketplace to cheat the American public and more recently, both public and private pension funds. Naked short selling — the counterfeiting of shares that are never delivered — is one of Wall Street’s greatest on-going crimes. Articles, books, and lawsuits have documented toward $100 trillion (not billion — TRILLION) in money stolen in this fashion.  That money is then used to buy land, buildings, inventions, airplanes, mansions and boats all over the world as well as gold, silver, and other valuables.
Above is shown the “ecology” of naked short selling, an on-going crime with US Government complicity.
The US Congress, particularly the Senate Banking Committee, has explicitly protected Wall Street from lawsuits and from federal racketeering investigations. The Senate Banking committee has explicitly condoned the turning of a blind eye on Wall Street financial crimes by the SEC, FINRA, and the FBI.
Major banks and hedge funds are allowed to counterfeit billions of shares — “phantom shares” that are never delivered despite good regulations that among other things demand “settlement” (delivery of purchases shared) within a few days of purchase. Every participant in this crime is “cooking the books” while destroying target companies to avoid prosecution — once a company is destroyed its shareholders have no legal standing to sue the criminals that destroyed the company with naked short selling.
The Depository Trust & Clearing Corporation (DTCC) is a “self-regulated organization” that is the chief enabler and cover-upper of Wall Street’s financial crimes. It constantly refuses to cooperate with what few legitimate government inquiries are made.

Companies chosen  for destruction are attacked not only with millions of counterfeit shares that cause the price (valuation) of the company to collapse, but this attack is aided by unethical law firms that file solicitations of class action lawsuits to scare legitimate investors into panic selling — these false solicitations, based on insider knowledge, constitute defamation and tortious interference. Because they are part of a conspiracy, if proven they would yield triple damages.

Then you have placement double-dealers — companies that specialize in raising money for emerging and small companies who betray their client by providing insider information to naked short sellers such that when the placement is finally made, the valuation is so low that the naked short sellers can buy low and keep their profits (for example, driving a price from $5 to $2 with counterfeit share offerings, then buying real shares at $2, yields a $3 profit per share across millions of transactions).  This is done every day.

Paid “bashers” including journalists working for the top financial media services companies but also many bottom feeders who create fake market research companies and fake social media accounts to maliciously libel the target company into death are an essential part of the criminal mob that is profiting from the death of target companies.

$100 trillion appears to have been stolen from the public by Wall Street over the past ten years.  Can our President get it back and apply those funds to compensate past victims and also re-boot the American economy?